A new startup has turned Oakland's dinner party culture into a marketplace for cooks and food enthusiasts. 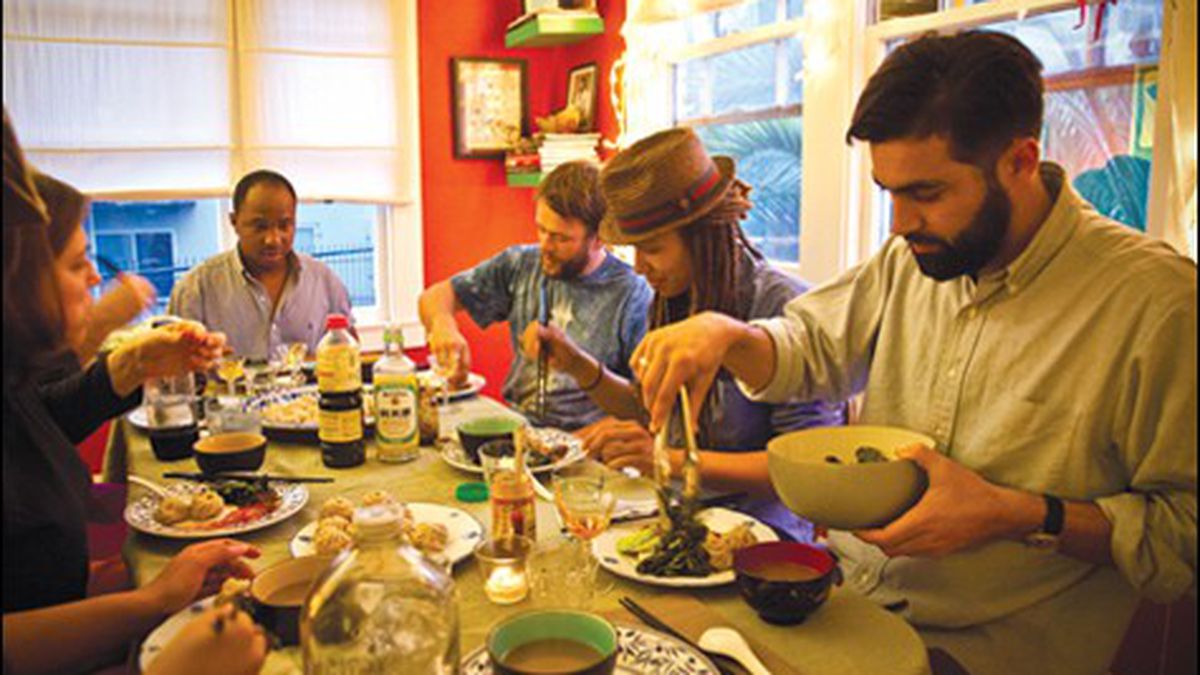 A year ago, Amanda Yee and a dozen of her neighbors began gathering every month for an informal dinner party, bringing together folks of diverse cultures, ages, and tastes to share a meal. So when Yee heard about Feastly (EatFeastly.com), a new website that markets private dinners to the greater public, she decided to join, becoming one of the first to host an event in her home — a post-First Friday midnight snack of French fries topped with carne asada and hollandaise sauce, plus a savory milkshake that included duck fat and crunchy waffle bits. One of her neighbors, eight friends, and four strangers paid $19.80 each for the experience, and although she didn’t make any money on the meal, Yee was hooked on the concept.

“I truly believe in the idea of the table and using it as a means of building community,” said Yee, who studied at Le Cordon Bleu in San Francisco and works for Oakland chef/food-justice advocate Bryant Terry. At her next dinner, which will be another late-night meal after First Friday on April 5, Yee will serve a modified version of Terry’s recipe for jung (a Chinese version of a tamale), Persian lamb pho, and sheep ricotta pancake fritters with a peanut butter Sriracha dip for $22 per person.

Feastly launched in Washington, DC in November 2011. Founder Noah Karesh came up with the idea after traveling through Guatemala. Fed up with bad tourist food, he had found the most authentic meal of his entire trip at the home of a kid who was selling avocados in a market.

Karesh modeled Feastly after Airbnb, an online marketplace that offers private homes as alternatives to hotel rooms, and the sites work similarly: Diners scroll through a list of available meals that include details such as dietary restrictions. Anyone can sign up to join a meal, but hosting is still invite-only and requires a formal approval process. Also like Airbnb, Feastly makes a profit by taking a cut from each transaction — in this case, by a 10-percent service charge onto the cost of the meal and taking 10-percent of the total amount the host makes.

So far, the site has focused on DC, New York City, and San Francisco. But, in fact, of the dozen local Feastly dinners to date, all have been in the East Bay.

Oakland native Chinzalee Sonami is Feastly’s local brand ambassador. Like Yee, she has a culinary and food-justice background: She spent four years as a specialty food buyer at Rockridge Market Hall and is part of a local group that advocates for increasing food access to low-income families. Sonami screens each Feastly host, who range from home cooks to professional chefs, and while most have some professional cooking experience, she expects that to change as the site grows.

“To completely open the site to anyone right now would be crazy,” Sonami said. “We first need to ensure everyone has a good experience.”

The site takes the same position as Airbnb when it comes to risk — essentially, that it acts as a platform connecting two parties and is not responsible for any problems that may arise at its dinners, the most obvious one being improper food handling. In addition, for legal reasons, alcohol is BYOB.

At a recent dinner at Sonami’s Lake Merritt apartment, cocktails, wine, and beer flowed courtesy of guests that included a bartender who works at Plum Bar. The Tibetan-themed meal started with lightly pickled white radishes and cucumbers, giving Sonami time to steam the momos — dumplings stuffed with organic beef, scallion, and ginger.

“Careful, they’re hot,” Sonami said as she placed the bamboo steamers on the table. “You’re supposed to eat them with your hands. It’ll have lots of juice so just suck it up in one bite.”

By the time Sonami served the second round of momos, the eight people seated on mismatched vintage chairs knew one another’s names. The conversation touched on travel, food, and culture. Sonami, who is of Tibetan heritage, explained that she learned the time-intensive momo recipe from her father’s brother.

“My dad passed away a long time ago,” Sonami later explained by phone. “Food is my only tangible connection to him.”

At $15.40 per person, the Tibetan dinner was on the cheaper end of Feastly meals, which average around $33 and have peaked at $200 in DC and New York City. Karesh said hosts can make anywhere from “a little pocket change” to “a few hundred dollars,” depending on variables like the number of guests, cost structure, and the personal following of the chef or host. Considering Feastly makes its money by taking a cut, the goal is to open the site to as many hosts and diners as possible.

“Eventually, we want to have dinners scheduled every night of the week,” Karesh said.

Editor’s note: The previous version of this story got wrong the last name of Amanda Yee. This version has been corrected.