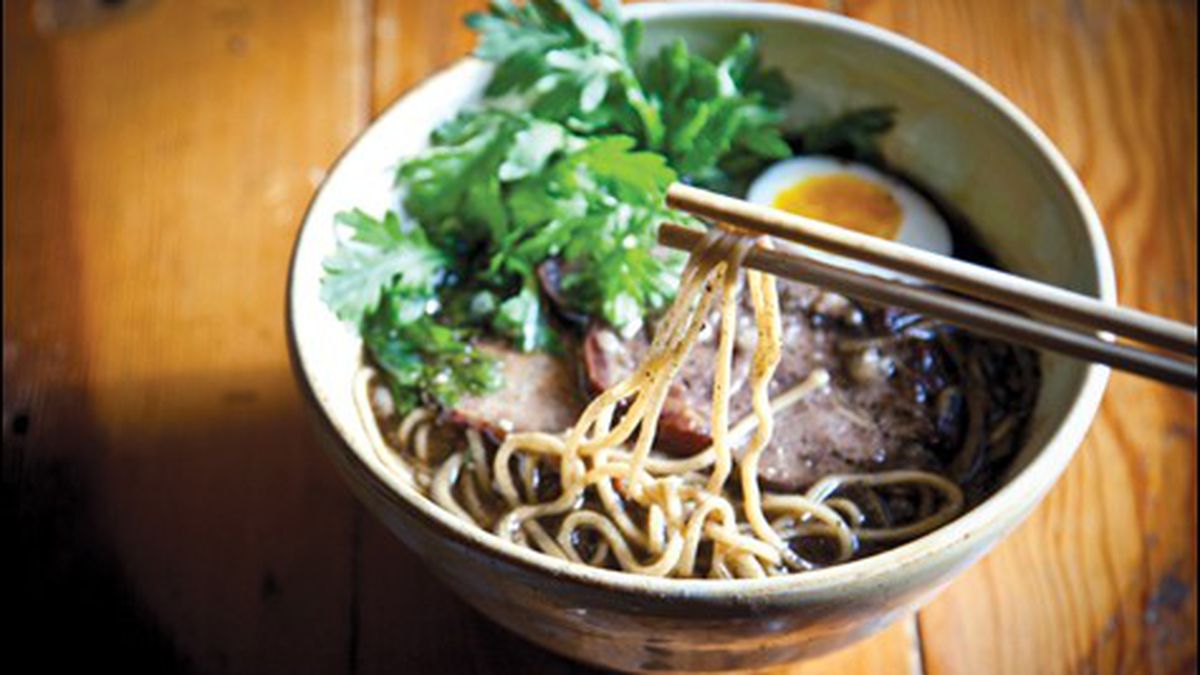 A handful of East Bay eateries challenges notions of authenticity and value.

Over the past few years, chefs of pedigree have been opening trendy East Bay restaurants that specialize in high-quality street food: Hawker Fare, Ramen Shop, and Juhu Beach Club are three of the newest and most popular places that have taken street food off the streets and given it a quality upgrade, in the form of organic produce and meat, skilled preparation, refined presentation, etc. The unfortunate reality of our food system, however, is that quality costs more, and some consumers are having a hard time swallowing higher prices for perceived “cheap food.”

In a region where many of us are self-proclaimed foodies and every foodie is a self-crowned critic, it can be hard to pick apart the tangle of perceptions, prejudices, and fetishizations that come with each plate of “ethnic food.” Negative online reviews of the three restaurants above — although always to be taken with a grain of salt, of course — tend to take umbrage with two main themes: authenticity and price. In almost equal proportion to the folks who have jumped on the sustainable bandwagon are those who are outraged by the idea of spending $15 on a bowl of ramen or curry shrimp.

Chef Preeti Mistry got a swift introduction to the backlash against high-end street-food when she opened Juhu Beach Club in Temescal on March 1. Mistry, who grew up in the United States but whose family hails from Mumbai, tapped her childhood cravings to create a concise menu that specializes in Indian street food.

The focal point of the menu is the pav, a slider-sized roll filled with vegetables, fried potatoes, chicken, or braised short rib. The pav, which could be interpreted as India’s answer to the hamburger, emerged on the streets of Mumbai over the last forty years and has been gaining popularity since. At Juhu Beach Club, each pav is $5, or $13 for any three. Mistry said some people started complaining about the prices before they had eaten at her restaurant, but the former Top Chef contestant pulls no punches about why she thinks people are so angry about the cost of her food: “I think it’s racism, plain and simple,” she said. “I mean, you can create a $16 burger using, whatever, locally grass-fed beef and your own grind, and people will pay that amount and have no problem with it. But if you try to do something with a higher level of technique or level of ingredients [in Indian food], all of a sudden it’s not authentic.”

Mistry is not alone in her frustration. The Chez Panisse alums who recently opened Ramen Shop in Rockridge — Sam White, Jerry Jaksich, and Rayneil De Guzman — have received similar feedback about their restaurant, which makes Japanese ramen from scratch. “It’s kinda sad because we do lose a lot of clientele before they even come in the door,” said Jaksich.

What people don’t understand is what it takes for street food to go high-end. On a Wednesday afternoon, about ten cooks were in the Ramen Shop kitchen, chopping, peeling, and stirring. The noodles are handmade. The broth is cooked from scratch. The cooks worked furiously on a tight one-page menu because prep and production are extensive and time-consuming. The meat is high-quality, so much so that the Ramen Shop spends about $500 a day on pork alone. All the employees are paid a living wage, and full-time employees get health care. And yet, people still make assumptions about the quality of the food.

“It’s funny, there’s a lot of people in the neighborhood that are like, ‘Do you use MSG?’ and it’s like, ‘No! No,'” said White. “People just kind of assume, ’cause it’s the type of food …. I think ramen and MSG and flavor packets are overlapping in people’s heads.”

Despite the consumer confusion over value and cost, more trained chefs with a fine-dining background are using their talents to reinterpret street food. James Syhabout is owner and chef of Commis, the only Michelin-starred restaurant in Oakland. In 2011, he opened Hawker Fare, a casual restaurant that serves Southeast Asian street food— primarily rice bowls and small plates. The menu reflects Syhabout’s Thai roots, and stays true to his high standards.

“I created Hawker Fare not because it’s a trend but because it just makes sense,” said Syhabout. “Honestly, we’re catering to ourselves and we’re just sharing it. I thought, I’d love to go to a place like this, but it never existed, so we created our own space and we’ve set our own expectations. I think that’s the beauty of it.”

Hawker Fare has a young, funky style. Framed posters and graffiti artwork stretch across the back wall, and the communal tables are packed at lunch and dinner. The restaurant is certainly not a hole-in-the-wall. Neither is Juhu Beach Club, which is decorated with old black-and-white-photographs of Indian cricket games and beautiful women in saris, and colorful wallpaper of exotic flowers and monkeys in fezzes.

The youthfulness and currentness of the new street-food restaurants is something new. These are not mom-and-pop diners, nor are they fine-dining restaurants. These are the kids’ restaurants, and the kids are reinventing the old models.

“What we’re doing is something that hasn’t been done before, therefore it’s going to take a lot of changing of people’s minds and mental outlooks on what they think of when they think of Indian food,” Mistry said. “Right now Indian food exists in basically two boxes: there’s cheap Indian food … and then there’s your high-end places like Amber India or Dosa that have tablecloths and a full bar and fancy waiters and all of that sort of pomp and circumstance of a fine-dining restaurant. And we’re sort of in this in-between place …. It’s a fun casual place and, quite honestly, our price point reflects that.”

According to Mistry, a lot of people have a fetishized concept of an “authentic greasy-spoon divey Indian place or Thai place” that is making “real” food. She said that, in reality, the food at these restaurants may not be that authentic, because the owners are often focused on the bottom line and cut corners to get by. Mistry mentioned an Indian restaurant she went to recently that had replaced the cilantro with spinach in a traditional cilantro chutney — perhaps to save money, or perhaps to cater to less adventurous taste buds. “How many of those owners actually eat the food that is coming out of their restaurants?” she questioned.

As a chef with ten years of professional experience in the kitchen — most recently as the executive chef at Google’s high-volume Bon Appetit Management Company — Mistry says that she is now cooking the food that inspires her. A few years ago she went to Mumbai with her family, “ate everything in sight,” and brought those flavors and textures back with her. She started cooking the food she loves with quality California ingredients at a pop-up in the Mission. The opening of Juhu Beach Club was the culmination of a personal goal, and for her, this type of food is the most authentic.

“James [Syhabout] is a great example as well, because it’s like, ‘so basically what you’re saying is that my experience is not authentic,'” said Mistry. “So someone who was born in another country but raised here or born in the United States but whose family is from another country … me expressing my food, which is influenced by all of these things, is not an authentic experience, so I’m damned if I do. If I cook California cuisine, it’s like, ‘Ugh, what is that Indian girl doing cooking French food?’ or whatever’ … It’s actually really fucked up … It’s like negating the existence of people and their experience and saying that it’s not authentic, when it’s so authentic, because it’s not trying to be something it’s not.”