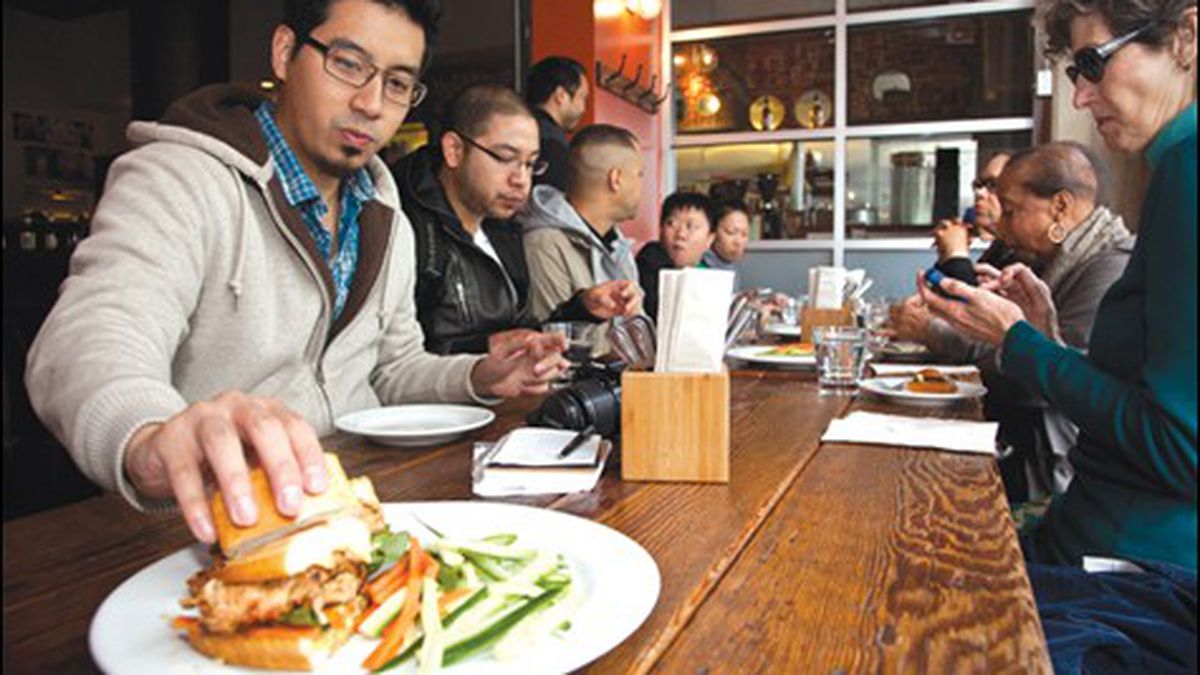 Staycation for the Foodie

Local food tours are capitalizing on the increasing desire of diners to connect with their food.

Ask Tracy Lee why she started Dishcrawl, her food-tour business, and the answer comes simple and short: “I love to eat.” Armed with a marketing background and a huge extracurricular interest in eating, the San Jose resident started her first “dishcrawl” just over three years ago, not necessarily expecting much to come out of it.

Suffice it to say she was very, very wrong. Dishcrawl now conducts tours in more than one hundred cities in the United States and Canada, including Oakland, and, soon, Alameda. What’s more, Lee is far from alone: Though hard statistics are difficult to come by, it’s safe to say the food-tour business is booming, and Dishcrawl isn’t the only such company to have experienced swift, steep, success. In the Bay Area alone, thanks to companies including Dishcrawl, Edible Excursions, and the newly launched Savor Oakland, it’s possible to tour a different neighborhood nearly every day of the week. According to Lisa Rogovin, founder and CEO of Edible Excursions, which leads tours in Temescal and the Gourmet Ghetto as well as several neighborhoods in San Francisco, there are now entire companies devoted to consulting on how to start food tours.

In the Bay Area, at least, the general setup is fairly set: Most tours typically last between two and three hours and make anywhere from four to eight stops, usually at a mix of high-end restaurants, holes-in-the-wall, and, increasingly, bars and food trucks. But beyond that, each company has carved out its own particular niche in a field that seems ripe for many of them. Edible Excursions sets itself apart by hiring established chefs and food writers as its guides — for example, it counts former Top Chef contestant (and current Juhu Beach Club owner) Preeti Mistry as well as local food writer Sarah Henry among past and current guides, who are assigned the only-slightly-ridiculous title of “epicurean concierge.” Dishcrawl, meanwhile, keeps all its stops secret. Some bring chefs and restaurateurs out of the kitchen to introduce dishes and answer questions while others leave it all up to the guides; some focus just on food, while others, like Savor Oakland, aim to educate participants about a neighborhood’s history as well. All of them aspire to create a sort of prepackaged food experience that’s something between a pub crawl, a guided tour, and a community bonding experience.

“What I love about it is you’re with people who are on the same page as you,” said JP Fernandez, who will be heading up Alameda’s upcoming Dishcrawl. “You’re building a community around food, you’re getting acquainted with different kinds of food.” And that, he added, is good for chefs as well as crawlers: In addition to whatever money a restaurant gets from the tour company for its samples, it also gets a chance to experiment with new dishes; receive honest, in-person feedback from people who really care about food; and, hopefully, pull in some new customers.

The way Lee sees it, the entire model is about capitalizing on something people are already interested in. “Every community has passion for local business and for wanting to eat out,” Lee said. “We make it really easy for people, so all you have to do is show up.”

A big part of the appeal does seem to lie in the fact that these tours require very little research or planning: “This appeals to people who don’t have very much time,” Rogovin said. “It’s sort of all put together for you. Do you know about these places? Maybe. But chances are, out of the seven or eight places we go to, you may only know about one or two of them. I hate the term ‘staycation,’ but it feels like you’re on vacation. It’s an experience.”

If the staycation reference wasn’t enough, it should be noted that none of this comes particularly cheap: Most of these tours cost between $45 and $75, and, depending on which one you take, you may not finish having eaten a full meal. But people who run them argue that paying participating restaurants fairly for their food, labor, and, in some cases, the time it takes to step out of the kitchen and talk, is expensive, as is paying the guides. “What we do is sort of cut through the haze,” said Carlo Medina, who runs Savor Oakland with his wife, Geneva Europa. “Sure, you can go to a bunch of restaurants on your own and call it a tour, but you won’t really see what Oakland’s all about.”

Savor runs three tours a week of the Jack London district, but the four-month-old business is already doing so well that Medina is adding an Old Oakland/Chinatown package as well. Edible Excursions and Dishcrawl have also seen huge — and growing — demand in the past few years. “I think people want more and more to eat for pleasure but also to connect with the food that they’re eating,” said Rogovin. In her mind, this is all of a piece with both the farm-to-table foodie ethos that’s taken hold in the Bay Area of late, as well as with the rise in social networking and food-oriented pop culture, as evidenced by the popularity of companies like Instagram and the Food Network. But Lee’s explanation for the outsize popularity of food tours is characteristically blunt: “You know, some ideas just work.” &#8;