1. The $6.4 billion new Bay Bridge opened last night after eleven years of construction — and nearly 24 years after the Loma Prieta earthquake knocked down a section of the old span. Caltrans, however, is not done working on the new eastern span; crews must still finish a seismic repair caused by the failure of 32 giant steel rods earlier this year. That fix isn’t expected to be completed until December. 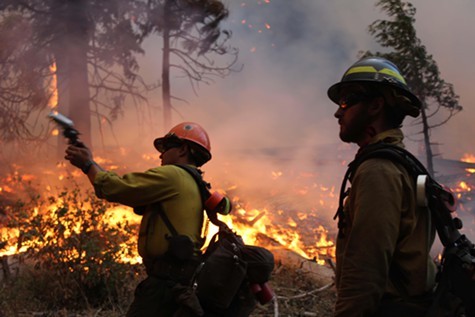 2. Thanks to favorable weather conditions, firefighters have now contained 75 percent of the massive Rim Fire, NBC Bay Area reportss. As of this morning, the Yosemite blaze had burned 236,000 acres and had become the fourth largest wildfire in California history.

3. Fire investigators are looking into whether the Rim Fire started at an illegal marijuana grow deep inside Stanislaus National Forest, the Mercury News reports. Some fire officials are saying the blaze was caused by humans — because there were no lightning strikes in the area where the fire began. However, the official cause of the fire has yet to be determined.

4. Jerry Brown’s plan to relocate two giant water tunnels proposed for the Sacramento-San Joaquin Delta region may run afoul of a 1996 statewide bond measure approved by voters, the SacBee$ reports. That measure, which provided funds to purchase sensitive wildlife habitat, specifically forbids the construction of a water conveyance system like the tunnels.