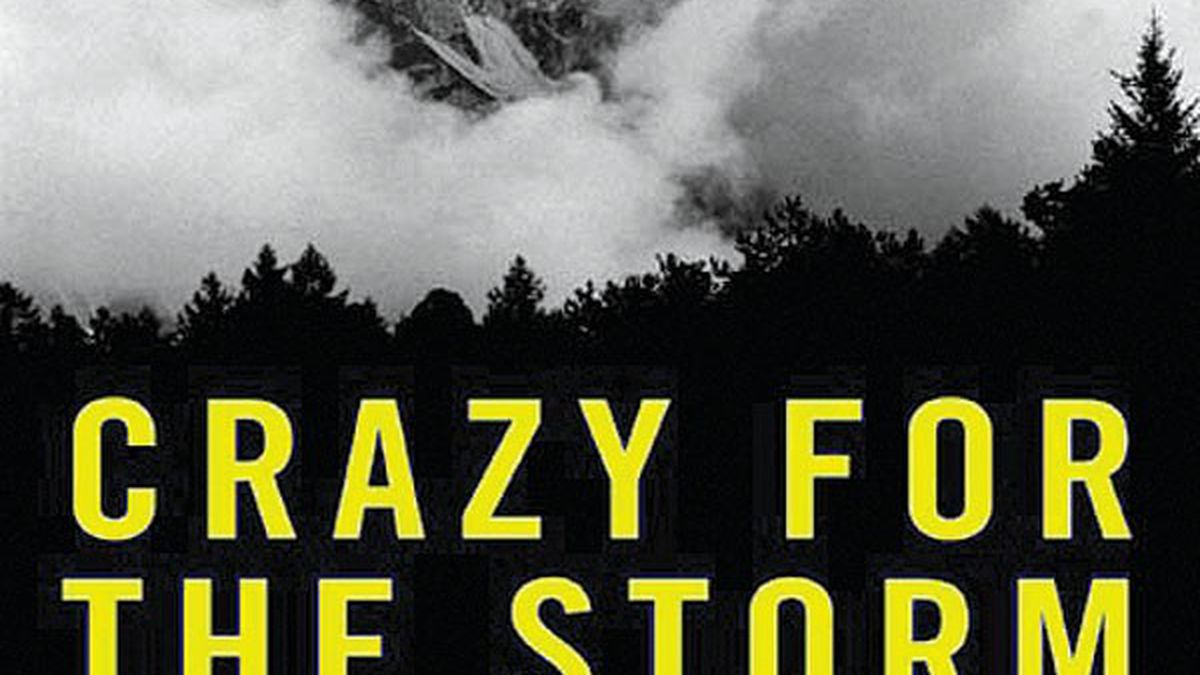 Crazy for the Storm: A Memoir of Survival, Norman Ollestad
$25.99

At age eleven, Ollestad was the sole survivor of a 1979 small-plane crash in the snowy San Gabriel Mountains. Dead in the wreckage — “He’s still warm, I told myself and squeezed him closer” — was his beloved father, a child star-turned-Hollywood lawyer who had taught Ollestad to surf at Malibu and ski at Big Bear when the boy was barely old enough to stand. Rhapsodic and quirky but never smarmy, this true survival story flashes back and forth from Ollestad’s solo trek out of the high-altitude crash scene to quirky childhood adventures — including a dreamlike after-the-deluge escapade in Baja — during which his father taught him the skills that, a few years later, would make this escape possible. This is a rare homage in an era during which parents almost always appear in memoirs as monsters — albeit sometimes justifiably; see Stitches, below. (Ecco)

Posing as a sex tourist, Cohen travels the world rescuing modern-day slaves. That’s his mission as the founder of AbolishSlavery.com, and it endangers his life every time he cases brothels and organizes breakouts, sparking crime syndicates’ ire. Drug-soaked sojourns with former best friend/business partner Perry Farrell, the Jane’s Addiction frontman, set Cohen on the rocky road that made him into a crusader against a thriving industry that finds preteens in Cambodia, Colombia, Sudan, Israel, and beyond undergoing horrors at the hands of clients and the people they tragically call their “owners.” A good companion-gift for this true-life thriller — in which pretending to be a pedophile is all in a day’s work — is E. Benjamin Skinner’s A Crime So Monstrous: Face-to-Face With Modern-Day Slavery. (Simon Spotlight Entertainment)

When Small was very small, he suffered from sinus problems, which his radiologist dad strove to “cure” with X-rays. As recounted in a fluidly drawn, devastating graphic memoir on par with Marjane Satrapi’s Persepolis, those rays caused the cancerous growth on Small’s neck that his emotionally inaccessible and ultimately abusive parents acknowledged, yet stalled for three-plus years before seeking treatment: Surgery, his mother yelled when he asked why he couldn’t see a doctor, costs a lot of money. Awakening from surgery virtually mute, missing his thyroid gland and a vocal cord, Small was expected to die but didn’t, emerging instead as an angry but talented teen who escaped into Alice in Wonderland fantasies and his art: at first figuratively, then literally, eventually winning a Caldecott Medal. (Norton)

The Boy Who Harnessed the Wind: Creating Currents of Electricity and Hope, William Kamkwamba and Bryan Mealer
$25.99

Too poor to attend school in a famine-stricken rural Malawi where life went on without electricity and at the mercy of witch doctors and rampaging killer rhinos, Kamkwamba spotted the design for an energy-producing windmill in a physics textbook titled Using Energy. Unable to read the book’s English text, he scavenged bike parts, wire, and pipe to create a marvel whose powers astounded everyone for miles around: “Some of these people had mocked me for months,” we read in this stunning testament to human ingenuity. “Each piece told its own tale of discovery, of being lost and found in a time of hardship and fear.” Now world-famous — he addressed the prestigious 2007 TED (Technology, Entertainment, Design) conference and guested last month on The Daily Show — Kamkwamba is in school, still building windmills. (William Morrow)

The Earth Hums in B Flat, Mari Strachan
$18

A debut novel by an obscure sixtysomething Welsh ex-librarian, this is one of those books that lie around ignored for a long time as you roll your eyes and think Please, not another coming-of-age tale, but which wind up making you wish they’d never end. In a Welsh village in the 1950s, twelve-year-old Gwenni can fly in her sleep, swooping over the houses “and across the sands to the sea where the air is always thick with salt that crusts my lips as if I’d that minute undone a blue twists from a bag of crisps and licked it.” Long-held secrets, a missing man, and Gwenni’s mentally ill mother form the backdrop of a hypnotically lyrical and mercifully not-so-sad saga in which human beings struggle to care for each other as wall-stains and teapots watch it all with wary eyes. (Canongate)

A DIY college course unto itself, this 1,095-page behemoth enriches an already glorious treasurehouse. Spanning 400 years, it salts even the obvious with thousands of surprising details, such as John James Audubon’s obsession with punctured eyes and “violated sight.” But its main mission is to inaugurate a vast league of bards from the Nuyorican poets to porn star Linda Lovelace, whose “voice has an almost autistic blankness” in autobiographies that raise “endless questions … that will shape our culture.” A clearly political literary history of America, it ends with Hurricane Katrina and the election of Barack Obama, its final chapter comprising cut-paper silhouettes depicting lynching, tears, and the scrawled message, “THE ERA OF NO BLACK PRESIDENTS IS OVER.” (Harvard University Press)

This year’s Man Booker Prize went to a sweeping, sprawling, sensual, dense, present-tense epic about Henry VIII’s reign from the perspective of Henry’s chief minister and Reformation-booster Thomas Cromwell, penned by an author whose multi-award-winning, always-engaging past works probe the complexities of human ambition and pain. Named for the ancestral home of Jane Seymour, with whom Cromwell persuaded Henry to replace doomed Anne Boleyn — because “any little girl can hold the key to the future” — this novel pursues those themes as well. Its protagonist, whom we first meet as a boy being kicked in the head repeatedly by his shrieking father, ended up being executed under Henry’s watch, his severed head then skewered on London Bridge. (Henry Holt)

Ten years after this country’s worst-ever school shooting, this addictive page-turner by a GLAAD Media Award-winning journalist will keep you up all night, absorbed in the lives and plans and ponderings of Eric Harris and Dylan Klebold. Displayed here with a grim but gripping authenticity drawn mainly from the teens’ own tapes and journals are two budding mass murderers building bombs, listening to Rammstein, and seeking prom dates: “Eric slathered chicks with compliments; Dylan passed them Chips Ahoy cookies in class to let them know he liked them.” A monumental chronicle, this book describes airborne facial chunks and napalm-hardened brain matter, because it must. “For Eric, Columbine was a performance,” Cullen tells us. “Homicidal art.” (Twelve)

Theorin’s debut novel, Echoes from the Dead, an award-winning bestseller in its author’s native Sweden, was my favorite book of 2008. In Theorin’s powerhouse second effort, a single dad living in a historic lighthousekeeper’s manor — “Eel Point by Eel Shallows, where the eels gather in the summer” — wonders why his barn has a secret room and his daughter seems to speak with her dead mother. Its stark seaside setting, lithe dialogue, and richly developed characters are earmarks of the Scandinavian thrillers that have lately and deservedly become bestsellers in English translation, thanks mainly to the works of Henning Mankell and Stieg Larsson. Hakan Nesser’s Woman With Birthmark and Asa Larsson’s The Black Path are skin-tinglingly worthy companion volumes. (Delta)

The Restored New Testament: A New Translation With Commentary, Including the Gnostic Gospels Thomas, Mary, and Judas, Willis Barnstone
$49.95

Rendering much of the King James Bible into poetry, multi-award-winning master translator Barnstone produced what he calls “a chastely modern” text that, in its 1,483 pages, demonizes no one: “Any marker of sect and theology that distinguishes any people adversely is human and humane error.” The New Testament “is a book of the mind,” explains Berkeley-based Barnstone; “it is infused with compassion and courage.” His annotations enliven familiar yet now more accessible stories of figures to whom Barnstone restores their original Greek, Hebrew, and Aramaic names: Miryam, Shaul, Yehuda, Yeshua. Barnstone’s blank-verse Apocalypse or Revelation by Yohanan of Patmos or Efesos remains reliably terrifying: “And there took place a great earthquake/And the sun became black. …/And the sky/Vanished like a scroll rolling up.” (W.W. Norton)

Farm City: The Education of an Urban Farmer, Novella Carpenter
$25.95

When she and her boyfriend moved into their Oakland apartment a few years ago, Carpenter began thinking of beehives, beets, and pigs. Raised by hippie back-to-the-landers who practiced what they preached, Carpenter set to work on the vacant lot next-door, transforming it by trial and error into a functioning farm while charting her progress in a blog, GhostTownFarm.Wordpress.com. The result is this charming, inspiring, instructive memoir: a paean to self-sufficiency, DIY, and the earth-saving power of outhouses by a UC Berkeley Graduate School of Journalism alum who cites The Omnivore’s Dilemma author Michael Pollan as a mentor. (Penguin)

A lot can happen in 3.5 billion years, as revealed in this five-pound antidote to Intelligent Design. In one hundred double-page site reconstructions based on major fossil finds, Barrett provides a remarkably lively blow-by-blow: from six-foot-long sea scorpions flourishing 430 million years ago in what is now central Scotland to the “predominantly right-handed” Neanderthal inhabiting what is now Gibraltar 50,000 years ago to the eight-foot-tall flightless moas that met the first human beings who arrived in what is now New Zealand seven hundred years ago. Published in conjunction with London’s Natural History Museum to mark Charles Darwin’s 200th birthday, this landmark project examines and celebrates hundreds of species. (University of California Press)

Whiting Award-winning Oakland resident Li grew up in the Cultural Revolution-raddled China that she brings heartbreakingly back to life in her long-awaited latest work. Beginning as two aging residents of ugly, industrial Muddy River town prepare to watch their daughter’s execution for what amount to thought crimes — later, the government will bill them for the bullets — this novel cuts like crystal as it follows an array of no-hopers: One sexually violates an executed corpse whose organs have been removed for transplant; another eats wall-paste; a speaker at a pre-execution “denunciation ceremony” recites “harsh, condemning words in a melodious voice.” As befits an upside-down society, a pair of garbage-pickers retain pretty much the most humanity of all. (Random House)