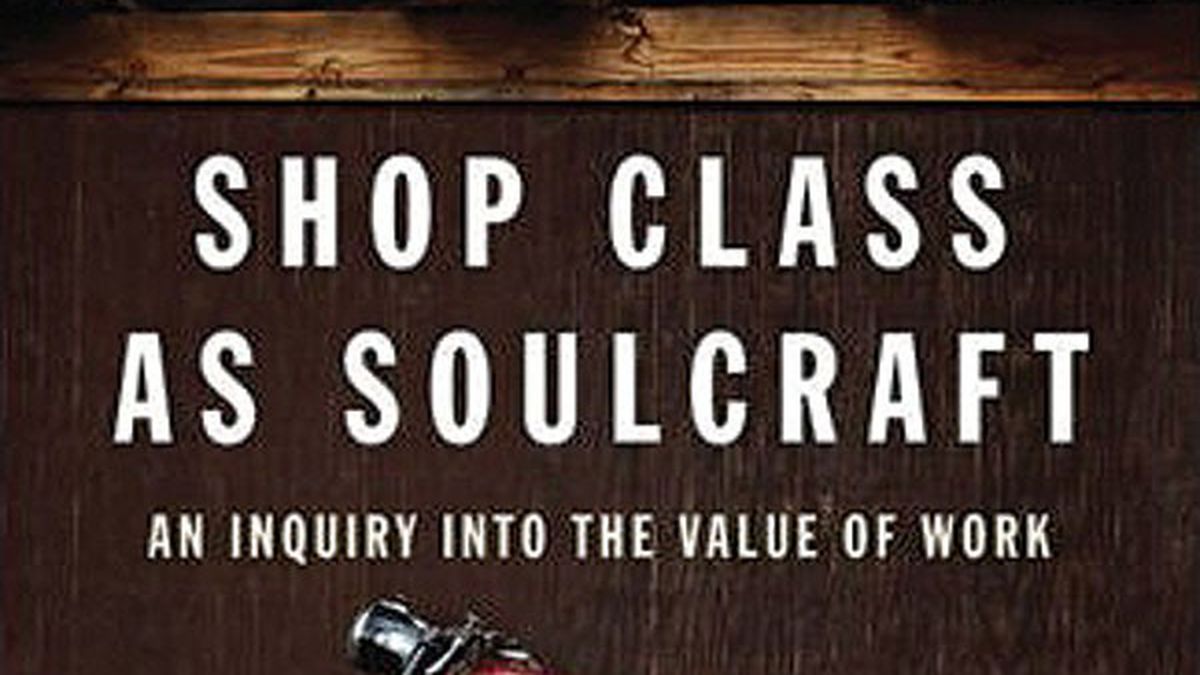 Before reflexively buying a bestseller, consider this critical evaluation of the top books in the East Bay.

Shop Class as Soulcraft: An Inquiry Into the Value of Work, Matthew B. Crawford
Penguin, $25.95

For those of you still wondering how many naugas they had to kill to make your naugahyde chair, here’s a much-needed reminder that Americans have nearly lost a fundamental human skill: making things by hand. In an era when almost nothing is created or fixed manually anymore, and fewer and fewer products are even made in American factories, Crawford honors the vanished age when people knew how to do stuff.

Manual labor long ago gave way to paper-pushing, which has now given way to byte-pushing, and the entirety of our national output is now not much more than 0s being changed into 1s and 1s to 0s.

Calling for a return to the basics, Crawford points out that manual inventiveness is more stimulating to the human brain than the abstracts of “information technology.” And if we don’t stop our rush into a digitized future, we risk losing our souls as well.

The Elegance of the Hedgehog, Muriel Barbery
Europa Editions, $15

One is tempted to dismiss The Elegance of the Hedgehog as a morbid exercise in pretentiousness, but one fact redeems it: The book was originally written in French for a French audience. And the French just can’t help maundering on about obscure philosophers and fetishistic japonisme; it’s not their fault. All the cultural namedropping in Hedgehog only becomes pretentious when embraced by American readers.

How else to characterize a bestselling but morose and ultimately depressing novel about a concierge for an upscale Left Bank apartment building who hides her erudition and brilliance so as not to offend the sensibilities of the class-conscious residents, one of whom is an equally brilliant suicidal twelve-year-old who also hides her genius? After several hundred pages of chicer-than-chic philosophical references and deep explorations of an obtuse-to-us French class system, the author dishes out a gut-wrenching nihilistic ending. Fin.

Many of us who have spent time among kids over the last ten or fifteen years believe something is seriously awry with the way we’re rearing the next generation. The more sensitive, deferential, politically correct, and well-intentioned parents act, the more cruel, narcissistic, demanding, and just plain mean our kids appear to become. Why?

Bronson and Merryman explode all the misguided modern notions of what makes a good parent. Most interestingly, they do this in part by closely examining the methodologies and motivations of developmental researchers and show that the studies underpinning contemporary child-rearing techniques are unconsciously slanted to fit preconceived notions of what we want parenting to be like — not what is actually best for kids.

The authors reveal counterintuitive facts on nearly every page; for example, that endlessly praising youngsters as most parents do these days usually ends up making the kids feel frustrated and inadequate, because as they mature they realize that they can’t possibly live up to the expectations embodied in the flattery.

The authors have just become this century’s antidote to Dr. Spock.

You’re just lucky. Well, maybe not you personally, but all those people who are richer, more famous, and more successful than you. They all just got lucky, Gladwell declares in his latest amalgamation of science and gut feeling.

It’s easy to see why Gladwell’s books are themselves “outliers” (data points that defy the norm — in this case, runaway bestsellers in an era of collapsing book sales). They supply a scientific rationalization for our basest emotions. Successful people aren’t necessarily successful because they’re smarter than or superior to the rest of us, he argues; they also had some lucky circumstance in their lives that gave them a leg up. They were born in the right year, had a better family life, met a unique opportunity by chance, or somehow more experience than their peers.

Critics have pointed out that Gladwell chose many statistics and anecdotes that supported his thesis while ignoring anything that might undermine it. In one example, he discusses how the Beatles got the opportunity to play in Hamburg in 1960, allowing them to hone their craft and gain unbeatable experience before coming back and taking England by storm. While true, what Gladwell doesn’t tell you is that a lot of British bands also went to Hamburg and followed the exact same early career path as the Beatles, but later stalled — precisely because they weren’t geniuses. He employs the advantage of hindsight to pick out some detail from a superstar’s career and hold it up as a lucky break others didn’t get — even if it only became a “lucky” break in the hands of someone who made proper use of it.

Brown fanatics and Da Vinci Code aficionados already know everything there is to know about The Lost Symbol. With 6.5 million copies in its first print run and a million sold on the first day of its release, this is on track to become the fastest-selling book of all time.

For the uninitiated: Brown’s fictional alter-ego is Harvard professor Robert Langdon, a “symbologist” who traipses the globe unraveling ancient mysteries. In this installment, he’s in Washington, DC wrestling with the secrets of the Freemasons, magic pyramids, and hidden meanings in well-known monuments.

The only remaining mystery about The Lost Symbol is exactly what sort of hairdo Tom Hanks will have in the film version.

My Life in France, Julia Child and Alex Prud’Homme
Anchor, $7.99

What had been a fairly charming unpublished tale of Child’s early life and culinary career, finalized by her grandnephew Prud’Homme and finally published posthumously in 2006 to only moderate interest, has suddenly exploded in sales and landed near the top of the bestseller lists because it now has a movie tie-in, and is one of many Child artifacts being reissued to take advantage of Julie and Julia, starring Meryl Streep and Amy Adams.

It’s a mixed blessing to see the upscale foodie scene go mainstream. On one hand, maybe it will convince more Americans to trade in their Big Macs for Boeuf Bourguignon; on the other hand, corporate tampering only tends to make everything more crass and cringe-worthy — like having a picture of Meryl Streep portraying Julia Child, instead of Child herself — on the cover of her own autobiography.

You’d think a saccharine tale about the clever and cutesy inhabitants of Nazi-occupied Guernsey Island during WWII might suffice to hold the interest of a few bored vacationers looking for a beach read, but for some reason this predictable historical romance has snagged a major audience, even among apparently intellectual Bay Area book buyers. I suppose if you didn’t already know about the German occupation of the Channel Islands, this might pique your interest at first — but a quick flip through the pages would reveal characterizations and plot gimmicks better suited to a Young Adult novel than to something meant to captivate grownups.

In TGLAPPPS, the fictional residents of Guernsey recount their oh-so-kooky yet oh-so-brave experiences with cardboard Nazi villains in a series of letters to an aimless London author who becomes inspired to move to Guernsey to research her next book, and ends up becoming a quaint Guernsey character herself. Isn’t it quaint?

Based on sales totals reported by Bay Books, Books Inc., Diesel, A Great Good Place for Books, Moe’s, and Pegasus.