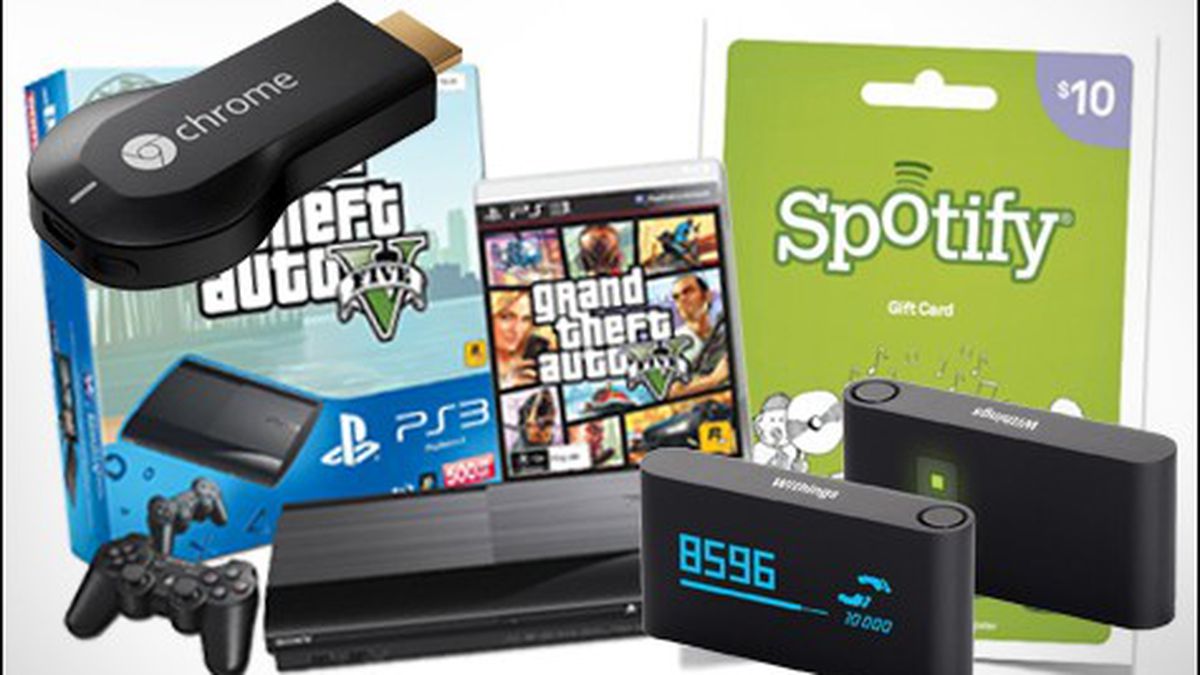 Still dreaming of sticking it to Comcast for overpriced cable TV? Google gets into the TV hardware game with a tiny, $35 dongle that plugs into the HDMI port on your TV and enables you to wirelessly stream YouTube, Netflix, Hulu Plus, Google Play Movies, Google Play Music, and any other Internet offering. Works with free apps on smartphones running Android and iOS. Easy setup.
Google.com Spotify Gift Card $10, $30, $60

The future of music does not involve wasting time managing files — not when so much recorded music is available anywhere, anytime, for $9.99 per month on any wifi-enabled device. Our kids are going to think buying MP3s is as silly as we think it is dumb to save web pages as you surf around the Internet. As such, Spotify gift cards — available at Target, Walmart, and elsewhere in $10, $30, and $60 quantities — give you access to the world’s best source for streaming music, so you no longer have to stay up all night downloading virus-laden ported files. Fight piracy with access to everything.
Target.com Withings Pulse $99.95

From the makers of the powerful, easy-to-use Smart Baby Monitor comes Pulse, a pocket-sized activity-tracking tool for adults. The black matchbox-sized device weighs just eight grams and can be worn in a pocket, placed inside a bag, or clipped onto a belt, shirt, or bra. It monitors heart rate; tracks steps; detects running; and measures distance, elevation, calories burned, and even quality of sleep (when worn on one’s wrist). The front of the device is an OLED touch screen that allows you to access fourteen days’ worth of data, while the back is a heart-rate sensor. The device syncs via Bluetooth Smart with the free Withings Health Mate App in real-time. Two-week battery life.
Withings.com Playstation 3 “GTAV” 500 GB Bundle $269

We’re going reactionary this year: Buy the old Playstation 3 and not the new Playstation 4, which came out on November 15. Why? Because version 1.0 of anything is for fanboys and play-testers, and you’re better than that. (It took four years after Playstation 3 launched for the best games to come out.) Playstation 4’s paltry lineup doesn’t justify the $400 price tag, as its best games likely won’t be released for years. Meanwhile, the seven-year-old Playstation 3 is in its prime, and developers are maxing out the system with the jaw-dropping Grand Theft Auto V, The Last of Us, Uncharted 3, Batman: Arkham City, Red Dead Redemption, and a dozen other now-discounted greats. There’s also PS3’s thriving indie game market, in which titles like The Walking Dead: A Telltale Game Series are pushing forward the genre of narrative. The massive, half-terabyte hard drive also holds about 300 movies or 3,750 games, plus it plays Blu-Ray discs.
Amazon.com GoPro Hero 3+ Silver Edition $299.99

The best-selling camera on the planet deserves a second look if you’re not onboard yet. GoPro has upgraded its affordable line of high-performance cameras just in time for snowboarding season, and everyone seems to be rocking one these days. The GoPro Hero 3+ shoots HD1080p video at 60 frames per second and takes 10-megapixel photos at up to 10 frames per second. It’s also waterproof to 131 feet and fits more than a dozen mounts for riders, skiers, boarders, and the like. The Hero 3+ is also 20 percent smaller, 15 percent lighter, and has twice the processing power and four times faster wifi connectivity than previous versions. But the real innovation in the Hero 3+ is the software, giving the Emmy Award-winning camera a 30 percent longer battery life. It weighs just 2.6 ounces and pairs with your smartphone.
GoPro.com Marshall Hanwell Compact Active Loudspeaker $600

Think of it as an iPod dock for the dude who has everything in life. The legendary guitar amplifier-maker Marshall offers a $600 limited-edition “Hanwell” speaker with a 3.5 millimeter jack for your phone. The burly Hanwell comes in a wooden cabinet covered in black vinyl, with front fret cloth and gold logo borrowed from vintage Marshall amplifiers. The body is outlined with gold piping, and as a tribute to Marshall’s fifty-year legacy, each Hanwell is branded with a numbered anniversary commemorative badge. This 23-pound beast of a speaker roars with 100-watt, dual six-inch, long-throw woofers and ferrofluid-cooled hi-fi dome tweeters to keep sounds sharp and clear.
MarshallHeadphones.com MacBook Air starting at $999

Happy wife, happy life — and spouses love the MacBook Air. The latest edition of Apple’s ultra-light laptop line weighs just 2.38 pounds and is thinner than most smartphones. The $999 machine doesn’t sacrifice an ounce of performance, either. The new Intel i7 chip can run at a speedy 3.3 gigahertz, and is assisted by up to 8 gigabytes of RAM. The 128-gigabyte flash memory drive allows the thing boot up in one second, yet it can manage all the vacation videos you can throw at it. It’s Apple, so OS X Mavericks simply works, meting out an astonishing nine hours of battery life. The thirteen-inch model is perfect for Scandal binge-watchers, and will get your partner off the main screen in your living room so you can do some gaming. For all but the heaviest of laptop users, the MacBook Air is the way to go if you want to do so with impeccable style.
Apple.com