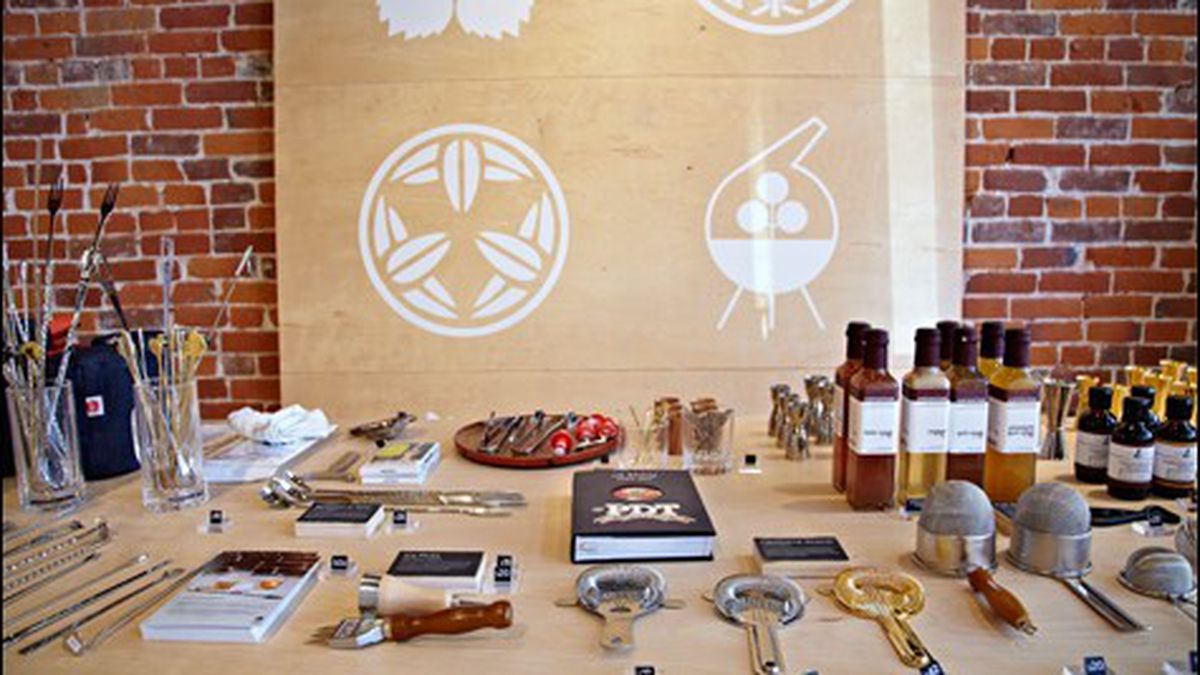 The Gift of Booze

With a little effort, gifts of alcohol can be thoughtful — not like an afterthought.

Any adult can buy a bottle of liquor at BevMo!, but thoughtfully giving booze requires a little extra effort. Thankfully, the East Bay is home to a bevy of outstanding producers and purveyors. St. George Spirits makes just about every spirit you can name these days, and breweries are in no short supply. The best boozy gifts are novel and, most importantly, tasty. If you’re giving someone a gift that’s meant to be consumed, you had better make every sip count. Here are our favorites: 2012 Roussanne Stone Crusher By Donkey and Goat Winery $30

“Orange” wines — which are more darkly hued than typical white wines because the skins of the grapes used to make them are left on during a portion of fermentation — are something of a cultish novelty in the United States. In other parts of the world, however, orange wines have been made for thousands of years. The 2012 Roussanne Stone Crusher, made by Donkey and Goat Winery with fruit from El Dorado Hills, is anything but a novelty: With chewy tannin and excellent structure, it’s a white that will delight and surprise lovers of red wine. It’s strong enough to hold up to the heavier foods of the season, such as meat, seafood, and roasted veggies, and has a delicious, lingering finish. The Stone Crusher is an exciting example of the forward-thinking winemaking in the East Bay that has garnered national attention. But mainly it tastes really great.
Available at Donkey and Goat Winery, 1340 Fifth St., Berkeley, 510-868-9174, DonkeyandGoat.com Bartender’s Tool Kit Gift Set $125

Bar tools last forever, and this set is immaculately crafted. So no, this is not a great gift for a friend who willingly takes shots of vodka, but it might be appropriate for someone who wants to elevate his or her five o’clock game. Because if the craft cocktail movement has taught us anything, it’s that good drinks require good tools. This set, available at Umami Mart, includes the essentials: a beautiful Yarai mixing glass, a strainer, a jigger, a bitters bottle, a barspoon, and a spherical ice tray. If it’s a little out of your price range, Umami Mart also sells individual items, including highball glasses, unique barspoons, a charming (but surprisingly hefty) bottle opener in the shape of a fish, and a variety of different sized spherical ice trays.
Available at Umami Mart, 815 Broadway, Oakland, 510-575-9152, UmamiMart.com 2010 Zinfandel Florence Vineyard, Dry Creek Valley By Dashe Cellars $35

Dashe Cellars has been quietly making some of the best Zinfandel in California for nearly two decades. Until recently, Zinfandel has had a bad reputation: It was largely (and rightly) written off as overblown. But the Dashes have done a lot to change that. They make wine in a more European style — meaning it’s higher in acid and less oaky than most Zinfandels. Their 2010 Zinfandel from Florence Vineyard in Dry Creek Valley is truly outstanding. Boasting dark fruit and spicy floral notes, it achieves an expert balance between fruit and acidity, which makes it an excellent wine to drink with food (the Dashes recommend grilled lamb and other foods that can stand up to its intensity). The Dashes’ wine could fetch a far higher price if their winery was located in Sonoma, where they source their grapes. So take advantage of their location in Jack London Square: This wine is a steal.
Available at Dashe Cellars, 55 4th St., Oakland, 510-452-1800, DasheCellars.com 25th Anniversary Edition of Adventures on the Wine Route By Kermit Lynch $28

In the wine industry, Kermit Lynch is a god among men. Natural winemaking is finally starting to gain influence in the United States, but Lynch has been cultivating relationships with French and Italian natural producers since the 1970s to sell in his North Berkeley store — he’s a humble visionary who is finally getting his due (in the mainstream, anyway). Nearly two decades after it was originally published, his quintessential book, Adventures on the Wine Route: A Wine Buyer’s Tour of France, was described as “one of the finest American books on wine” by New York Times wine critic Eric Asimov. The book has been redesigned for the 25th anniversary edition, which also includes an epilogue. Entertaining, sincere, and quirky, it’s a must-read for lovers of local history and wine. Good imported wine is annoyingly challenging to buy in the United States. Adventures sheds some on light on just how lucky we are to have Kermit Lynch in the East Bay. Hand-Selected Bourbons prices vary

When it opened in 1935, Ledger’s Liquors was issued the fourteenth liquor license in California. Few probably know more about bourbon than Ed Ledger, who has managed the family-owned and operated store since 2002. Each year, a coalition innocuously titled the “East Bay Study Group” gets together to hand-select the best bourbon barrels from makers like Elijah Craig, Four Roses, and Henry McKenna to bottle and sell exclusively at the store. Ledger said that he selects barrels based on uniqueness. “We’re looking for barrels that are different from anything else out there …. The flavor profiles vary, but they’re all one of kind.” If you have a friend who’s a bourbon aficionado (or an aspiring one), there’s no better place to go bourbon shopping: Ledger’s offers no fewer than three hundred different bottles of bourbon at its store, but you can guarantee that your gift is one-of-a-kind by purchasing one of its hand-selected bottles.
Available at Ledger’s Liquors, 1399 University Ave., Berkeley, 510-540-9243, LedgersLiquors.com &#8;