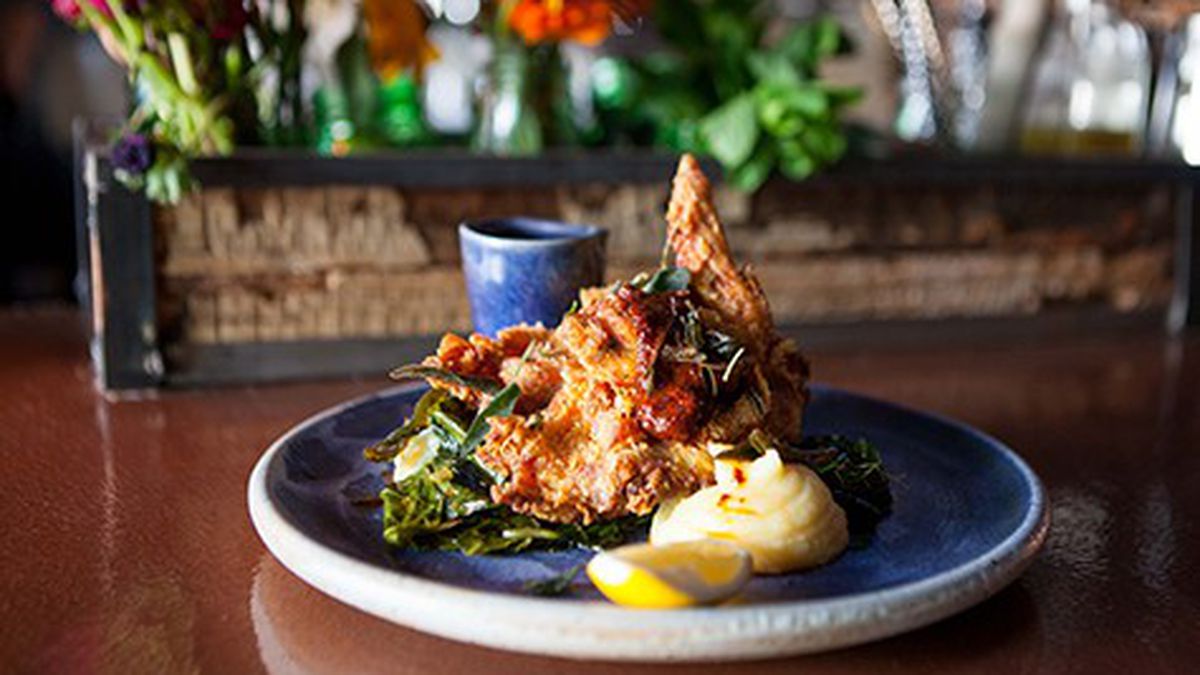 They say you know a tiger by its stripes. Tigerlily, a new upscale “Indo-Asian” restaurant in North Berkeley, has the telltale markings of a trendy Bay Area restaurant, circa 2015: an appropriately ingredient-focused menu, $11 craft cocktails, Edison bulbs, and lots and lots of succulents.

But Tigerlily — which replaced Mint Leaf, a traditional Indian restaurant, in January after a stealthy, months-long renovation process — aims to be more than just another handsome farm-to-table restaurant. Mint Leaf proprietor Deepak Aggarwal, who also owns the Khana Peena restaurants and East Bay Spice Company, said that the restaurant’s location next door to Chez Panisse gave him an admiration for the Bay Area’s time-honored everything-local-and-organic approach. Aggarwal did some of that at Mint Leaf, but he wanted to take things further — to create something different from every other Indian restaurant.

Besides, Aggarwal said, most of the Chez Panisse-style food that he’d tasted just didn’t have the kind of spice he was accustomed to as an Indian chef. “Why not do California cuisine, but put some flavor into it?”

At that point, Aggarwal asked Joel DiGiorgio of the Farm League Design and Management Group, his co-conspirator on the cocktail-focused East Bay Spice Company project, to revamp the menu and redesign the space. And DiGiorgio brought on an ambitious young chef, Joel Lamica (Ramen Shop, Pizzaiolo), to create a menu of fusion-y bar snacks — and eventually, as the scope of the new concept expanded, tapped him to be the executive chef.

The important thing to understand is that what Tigerlily serves is prettily plated modern California cuisine — along similar lines as a restaurant like Haven or Gather, but with a flavor palette mostly made up of South Asian spices: cardamom, turmeric, and garam masala. If what you’re craving is a traditional Indian meal, you’ll probably go home disappointed — in part because the prices are, to make a conservative estimate, at least 30 percent higher than even the fanciest Indian restaurants in town.

Still, if you can embrace Tigerlily’s self-styled “Indo-Asian” approach to California cuisine, with its tendency to highlight more subtle flavor profiles, then it’s easier to appreciate the creativity of the menu. One thing that’s clear is that Lamica knows how to put together a gorgeous plate. His root vegetable “carpaccio” (a salad of thinly shaved radishes, carrots, and turnips) was beautiful to behold — a brilliant kaleidoscope of pinks and purples, everything artfully arranged around a dollop of immaculately white house-made crème fraîche. I loved the tanginess of the simple lemon and olive oil dressing, but longed for some more assertive spice — a tad more salt, even — to make the flavors pop.

The kabocha squash fry bread, on the other hand, had no surfeit of flavor. Modeled after a Hungarian fried bread called langos, a recipe Lamica learned from a friend who cooks at San Francisco’s Bar Tartine, the bread came out thick and doughy, with crisp edges, and was topped with black sesame seed, a smoky roasted chili spread, and melted gruyere cheese. The best part was the turmeric chili oil that pooled on the bottom of the plate.

This is a restaurant that embraces the DIY aesthetic even more than the average farm-to-table restaurant, as Lamica and his team make their own yogurt, bake a variety of breads, and even churn the turmeric-spiked butter that eventually gets clarified and turned into the Indian staple ghee — delicious when slathered over a slab of jet-black squid-ink naan. Tigerlily has an entire wall of shelves lined up with jars filled with colorful concoctions that the cooks have created — whey, salted cabbage, ginger vin, and ginger oil were just some of the ones I could make out. It’s an approach that the restaurant has dubbed “Tiger style” — or, as it says on the menu, “a wholistic [sic] approach to cooking that emphasizes respect for the animal, crop, land and the farmer” and “embracing the challenge of using every ingredient to its full potential.”

Sometimes, this approach leads to dishes that are a little bit over-complicated. A lamb burger came on a perfectly excellent nettle-and-green-garlic brioche bun (though I couldn’t actually taste all that greenness), an oozy fried egg, and, as an optional add-on, an Indian-spiced, sweet-and-savory bacon that was incredibly addictive. But the garam masala-spiced lamb patty needed more salt, and ultimately the meat got lost under too many other extraneous elements, including pickled carrots and a raita that tasted like a strong chevre and, ultimately, overwhelmed the other flavors.

On the other hand, the pinnacle of Lamica’s Cal-Indian fusion cuisine can be found in a plate of his tikka masala fried chicken. The chicken (an “airline breast,” deboned with the wing drumette still attached, when I ordered it) goes through a two-day process — first brined, then marinated in buttermilk, hot sauce, and turmeric — before it’s dropped in the deep fryer. And it is just about perfect — juicy and full-flavored, with the kind of craggy but surprisingly grease-free crust that I associate with the best Southern buttermilk fried chicken. (Locally speaking, it comes closest to the style of fried chicken served at Brown Sugar Kitchen — but better).

Aggarwal, who still works in the kitchen every day, contributed the bright orange tikka masala sauce, a family recipe and perhaps the most traditional Indian element that you’ll find on the menu — rich, slightly tangy, and altogether wonderful. And, as befits a real California restaurant, the seasonal farmers’ market vegetables were no afterthought — tender braised cabbage and a creamy potato and celeriac purée when I ordered the dish. The only thing that gave me pause: the dish’s $24 price tag.

There are things about the restaurant that some may find irksome, starting with the fact that the remodel seems to have combined every trendy design element that one could possibly squeeze into a single restaurant — so many planter boxes and a dining area that’s set under a green canopy that seems intended to make you feel as though you’re eating in a rainforest. The Edison bulbs are attached to plumbing pipes, for God’s sake! The menu consists of long lists of ingredients and the name-dropping of farms. And the service, while affable, has kinks that need to be ironed out. It would have been nice, for instance, if our waiter could have warned us that our burger already came with vegetable chips before we put in an extra order, or if he’d let us know that the kitchen didn’t have the chicken leg and thigh we’d requested when he served us the breast. During weekend brunch, it took twenty minutes for a cup of coffee to arrive (out of a dispenser, not even individually brewed) while I watched the bar staff busily crank out brunch cocktail after brunch cocktail.

Still, all was forgiven when brunch actually came out. Hands down, the best thing I ate at Tigerlily was the fried chicken and waffles, which took the same impeccable chicken from the dinner menu (knocking the price down by $8) but paired it, and the tikka masala sauce, with an airy waffle and high-quality maple syrup. The genius of chicken and waffles is in its juxtaposition of the sweet and the savory, and somehow the addition of Indian spices only amplified those pleasures, with the syrup picking up a hint of heat from the tikka masala when the two blended together. Everything on the plate just went so well with everything else, and I spent an inordinate amount of time digging through the sauce to track down every bit of crispy chicken skin.

Every other dish from that brunch visit was a winner, too: a trout benedict that featured a tangy hollandaise, again spiked with turmeric, and one of the most gorgeously bright orange egg yolks I’ve had in a while, and a hefty square of cardamom-infused blackberry coffee cake — all flavors that somehow seemed born to go together.

Black Guys on a Beautiful Day: The Investigative Report