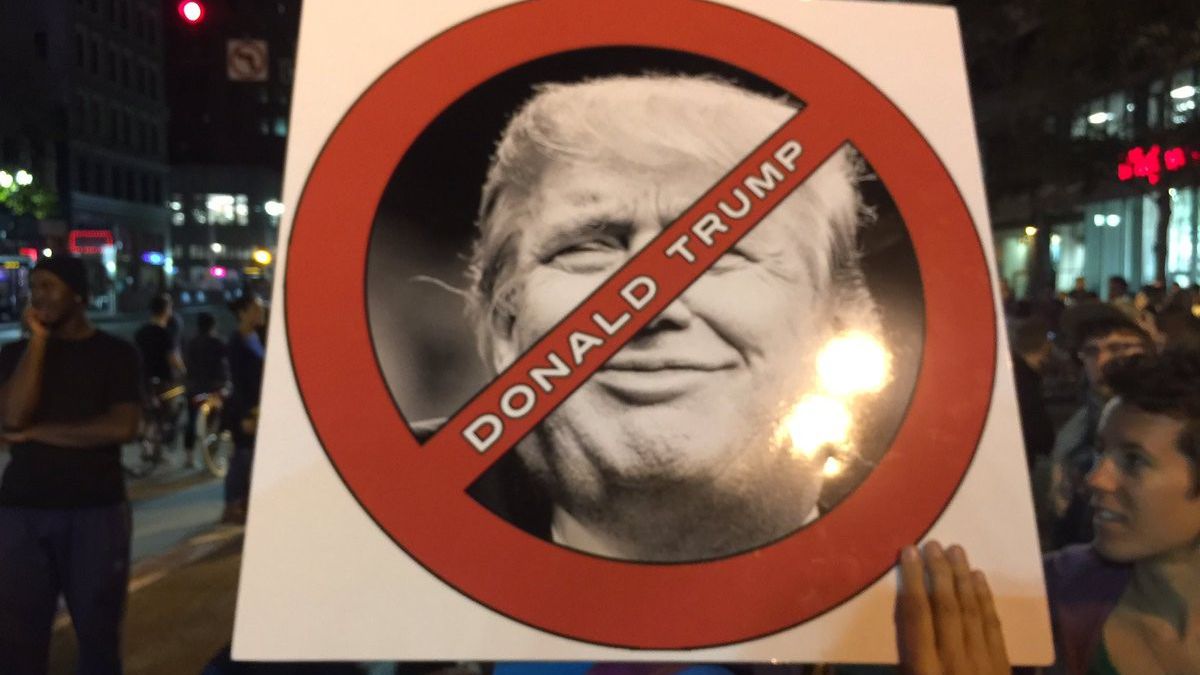 by Nick Miller
Nov 8, 2016
Thousands took to the streets of Oakland this evening in a massive demonstration against yesterday’s election of Donald Trump as U.S. president.
[embed-5]An estimated crowd of more than 7,000 marched through downtown just after night fall. Led by a flat-bed truck that blasted everything from Kendrick Lamar to Lil Boosie, at one point the march extended eight city blocks.

Activists of all ages toted signs and chanted “Not My President!” during the largely peaceful protest. A strong law-enforcement presence shadowed the marchers as they zig-zagged for several miles.

After 9 p.m., smaller groups of demonstrators began tagging buildings with anti-Trump graffiti. Multiple trash fires started in the streets, and individuals vandalized buildings. A statement from the Oakland Police Department stated that officers were attacked with rocks, bottles, and Molotov cocktails, and that there were many arrests for various charges.

Earlier in the evening, Maha Mizyed, a resident of Oakland for 23 years and dual American and Jordanian-Palestinian citizen, said she joined the march because Trump is going to harm not just the Bay Area, but also the rest of the country. “I worry about people,” she said. “He’s hurting the country and his own people.”

By 10 p.m., a fire had been started inside the Chamber of Commerce building, and several locally owned businesses were vandalized, including Oaklandish’s shop on Broadway.

There were also a few stand off-type encounters between smaller pockets of demonstrators and Oakland police officers. Glass bottles were thrown at police blockades, and cops used tear gas to disperse activists.
[embed-8]The area of downtown near City Hall, and the intersection of Broadway and Telegraph Avenue, was badly vandalized, according to images on social media.

Earlier in the day, Oakland Mayor Libby Schaaf released a statement about Trump’s win and the inevitable protests. “I understand the shock and dismay so many feel about a Trump presidency,” she wrote in a statement. “The best way to protest this election is to show that Oakland comes together and does not fall apart.”

Below are images and video from the protest and march:
[image-10] [image-13] [image-12]
[embed-7] [embed-2] [embed-3] [embed-4]Look for continued coverage of Trump’s election and the East Bay reaction throughout the week.