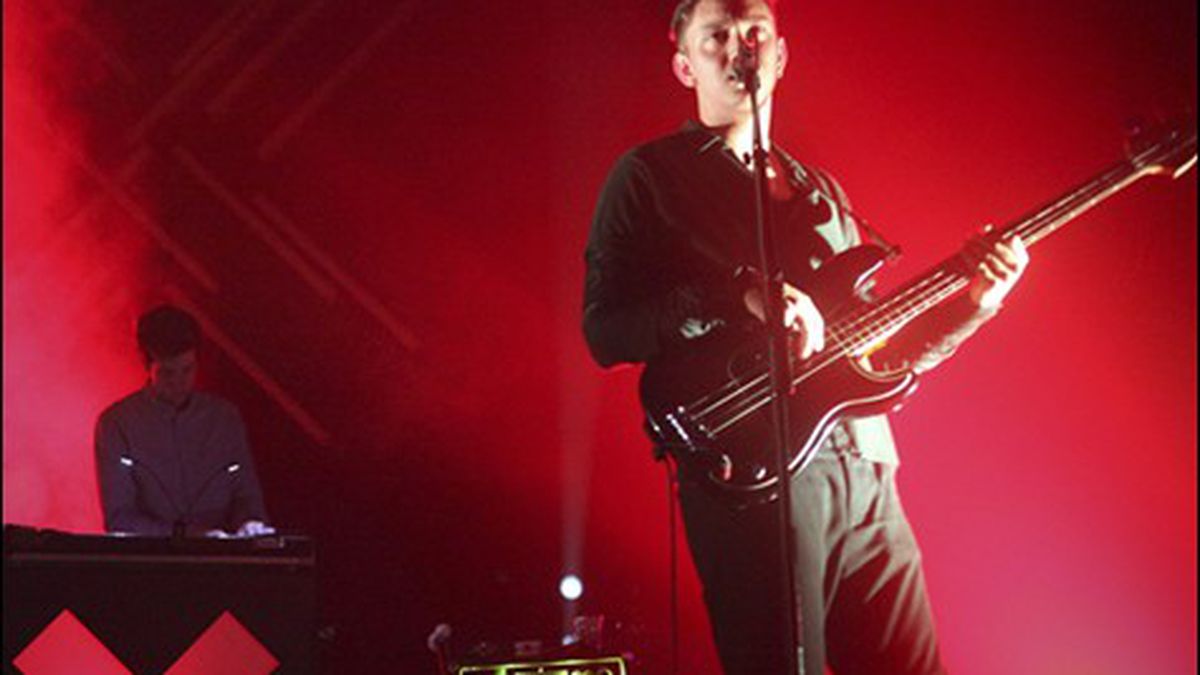 The XX’s Smoke and Mirrors

The XX waited all of thirty seconds into its show Thursday, September 23, at the Fox to reveal its objective, backed by the faintest clicking of a drum machine. The drums crescendoed and a black curtain dropped to reveal the trio illuminated onstage in front of a pair of ghost-white Xs. It was clear that it was crafting something dark and dramatic, as befits both its sound and its newfound mantle as critically acclaimed youth prodigies of goth-pop.

Those prodigies are singer-guitarist Romy Madley Croft, bassist-vocalist Oliver Sim, and producer Jamie Smith — all 21 and all from South London. Together, they make moody, minimalist techno-pop in the tradition of other downtempo acts like Portishead and Mazzy Star, to whom they are often compared. But the XX’s sound is better than both of those bands, rooted in a spare, stripped-down, push-pull aesthetic that, when done right, can be goosebump-inducing. What Smith’s synthed-out production might render antiseptic, Croft’s voice, saturated with lust and longing, makes anything but. Though she and Sim aren’t a couple in real life, their lyrics suggest otherwise. They sing almost exclusively about sex and the pursuit thereof, and their vocals, which go back and forth and occasionally meet in ringing harmony, evoke an intimacy that’s incredibly compelling (perhaps unsurprisingly, the crowd at the Fox appeared to be composed almost entirely of couples). Their sound is consistently good and sometimes brilliant: Loyal to its influences without being too literal about it; unique and innovative but not needlessly out there; self-assured in its use of silence and negative space; and unfathomably mature for a group whose members are freshly out of their teens.

It’s for all these reasons that the XX has managed to garner a sizable fanbase despite the fact that its songs aren’t at all catchy, at least not at first. Its self-titled debut album, released last August, achieved the rare “universal acclaim” ranking from Metacritic and made it darlings of the Pitchfork crowd. A couple months ago, it won the Mercury Prize, which is considered Britain’s highest music honor, essentially the UK equivalent of the Grammys‘ Album of the Year. Thursday’s show was the second time the band had been to the Fox Theater in six months, the first in April as Hot Chip‘s openers. Suffice it to say, the XX is headlining now.

Clad in black and leather, the members certainly looked the part. The smoke machine was on at full blast all night, and the light show was clearly — and expertly — choreographed, washing the stage in hypnotic, eerie purples and blues before alighting with tiny celestial pinpricks during the encore, “Stars.” The effect was moody and theatrical to be sure, but sometimes the whole act felt as though they were going through the motions. Perhaps band members were pantomiming their conception of what one of the biggest buzz bands around should be doing onstage, despite the fact that that kind of showmanship doesn’t really suit them. This is, after all, a group that appears to be philosophically opposed to the kind of musical pyrotechnics that make pop concerts fun. The band has said in interviews that before releasing XX, it assiduously combed the album for any stray bits of unnecessary sound. As artists, they’re willfully abstentious, bordering on ascetic; their sonic minimalism is deliberate, almost defiant, and it’s what sets them apart as so many other indie bands drape their music in dense orchestration. The XX is at its best when it’s quietest — when Croft’s voice slips to a near-whisper that’s at turns sultry and girlish, when Smith’s drum machines slow to a tick-tick-tick that feels much more viscerally suspenseful than something so wholly digital should.

There were a few of those moments on Thursday, when artist and audience hung in suspended silence, and they were transcendent. But by and large, the XX’s immense talent was obscured by billowing smoke, bright lights, and a throbbing bass that made the whole room vibrate. The band wasn’t off its game so much as out of its element. Aside from the pyroctechnics — and though, it must be emphasized, each of them played impeccably — the band didn’t do much to engage the crowd or offer up songs that we haven’t already seen from them. Though stage banter is usually meaningless, it’s a big part of the reason why people go to see live shows, and the XX’s chatter was minimal and almost entirely incomprehensible through their thick accents. Despite the addition of a cover of Womack and Womack‘s “Teardrops” and a few slightly stretched-out and souped-up songs, the setlist was lifted straight from the album.

Perhaps that isn’t a bad thing when the album in question is as good as XX. At 21, these kids have found what most musicians require two or three albums to finally put their finger on: a sound that’s preternaturally sophisticated, critically acclaimed, and all their own. They don’t need a smoke machine.