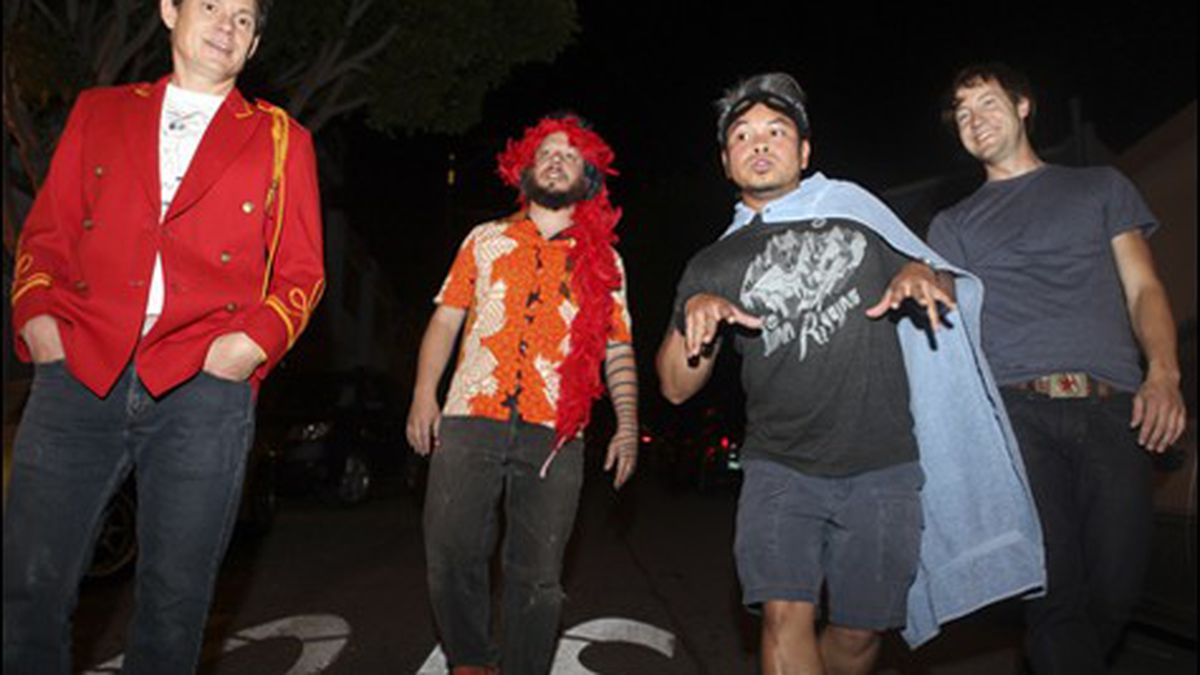 The Don’ts Just Do It

Collectively, The Don’ts are an odd bunch. Guitarist Joe Don’t is the skinny, self-effacing hipster who looks like he could have been a centerfold in Paste Magazine. (Needless to say, he hates hipsters — always a dead giveaway.) Bassist JJ Don’t is the failed standup comedian-turned-Internet tech guy. He grew up playing in school bands, and knows all the modal scales by heart. Singer Jonny Don’t is famous for horrendously strange lyrics — like a line he dreamed up during a recent jam session about how “everybody’s mom works at the airport.” Drummer Ken Don’t dyes his hair in bright primary colors, but says that swimming-pool green is his natural hue. According to Joey, he’s kind of a man-witch.

Somehow, it works. The four-tet formed about six years ago and became one of the more imaginative bands in San Francisco’s indie rock scene. Their music is catchy and glitchy, mixing traditional instrumentation with modern gadgetry: stomp boxes, foot pedals, a Casio PG 380 Japanese synth guitar, and a round doohickey that Jonny calls “the electric boob.” (It’s actually a theremin.) Their song “Blah Blah Blah” simmered through the blogosphere when it came out in 2007. It generated an equally infectious video that features JJ in full superhero regalia, complete with a towel for a cape. Their current album, Those Delicate Chemicals, garnered Top 20 airplay on KALX and KZSU. For a mid-level indie group, that’s not too shabby.

Some listeners would credit personality. Others would say it’s the tightness of their production. The Don’ts attribute their success to an unorthodox creative process, based on spontaneity. They don’t map anything out. They’re not planners. They use a methodology that’s usually associated with free jazz or noise bands, and apply it to a pop template.

“We just plug in, somebody starts something, and we just react,” Joe said. “Either it works or it doesn’t.” He says “Blah Blah Blah” was virtually unchanged from start to finish. Same goes for “AKA SOB,” which began as an ode to “Chimpy the Wonder Boy” (“aka George Bush,” Jonny said).

The Don’ts say they’re not a jam band. “We’re more of a jhaaam band,” Ken jokes. Yet, they do have characteristics of born improvisers: an ambient, Brian Eno riff and long, sputtery drumroll at the beginning of “Which Side You’re On;” a tendency to career between genre; long-ass albums (Those Delicate Chemicals clocks in at 51 minutes). And they have a scattered history, to boot. Joe and Ken both migrated to San Francisco from the East Coast by way of various other places. Ken spent eight years in Santa Cruz on a layover — he said his car broke down there, so he decided to stick around and form an underground theater company. Jonny originally hails from North Carolina. “I just kept running till I ran out of dirt, basically,” he said. “They put this ocean in the way.” His mother did, indeed, work at an airport.

Those Delicate Chemicals precipitated from three years of recording, hoarding, and filing tracks. The Don’ts made most of their new album at Ex’pression College for Digital Arts, an Emeryville complex of antiseptic studios and state-of-the-art gear. It’s a classy joint and a weird place to record an indie album — Joe bemoaned the prohibition against beer. But it worked out. The band members put more money into mixing and mastering this time around, and whittled each track down to a manageable length. For music born of “devised improvisation,” it’s remarkably well-sculpted. A lot of songs hover on two or three chords, but still have an implied bridge or rise. Ken’s chicka-chicka-bop backbeats help loft the guitar and basslines. Jonny has a pliant, radio-ready tenor and one of those faux-Manchester accents that makes all the songs sound like authentic Seventies punk — except you can actually comprehend most of his lyrics. He wrangles all the melodies and, in large part, shapes the band’s sound, if not its character.

The last three songs on the disc are completely improvised, and The Don’ts say that’s more the direction they’re headed in the future. “There’s a long tradition of music being improvisational,” he said, citing bands like the Rolling Stones, whose music started the old-fashioned way, with four guys sitting in a garage and jamming the hell out. But that form is gradually dying off. Nowadays, with the implicit mandate to create “viral” music, everything is engineered to have a certain ear-wormy quality. “Nowadays, usually the singer-songwriter fronts the band.” While Jonny can’t help but be the Don’ts’ tonal center, he insists on having an equal division of labor. The band has no leader and eschews the idea of a “frontman.” Everyone brings ideas to the table. Recordings are born from a long process of shambling and stumbling. The tape stops rolling when the beer runs out.

Earlier this year the band won a grant from local music blog The Bay Bridged, in conjunction with Tiny Telephone Studio in Potrero Hill. It covered two days of recording sessions, which was just enough for the band to record two-dozen crazy, ruminative, stream-of-consciousness tracks. Joe brought his trusty 1957 Gibson Hollow Body and a Fender Jaguar. Ken brought his 1970 Pearl drum set, a “smash” cymbal (his own invention, made of all the corpses of cymbals he’s smashed in his lifetime, piled together and screwed in place), and a touch-sensitive synthesizer pedal that he sometimes adds to the kick drum. JJ brought another whole arsenal of pedals. The Don’ts holed up for two days and recorded the whole time. Jonny crawled under the piano for one song, sang one in the hall, and did one in a fort that he’d built out of pillows and blankets. He hopes the vocals are still useable. “I just used a basic live vocal mic,” he said. “There may be a lot of — um, lead.”

He might send the final tape to a psychiatrist, to see if he can get it analyzed.