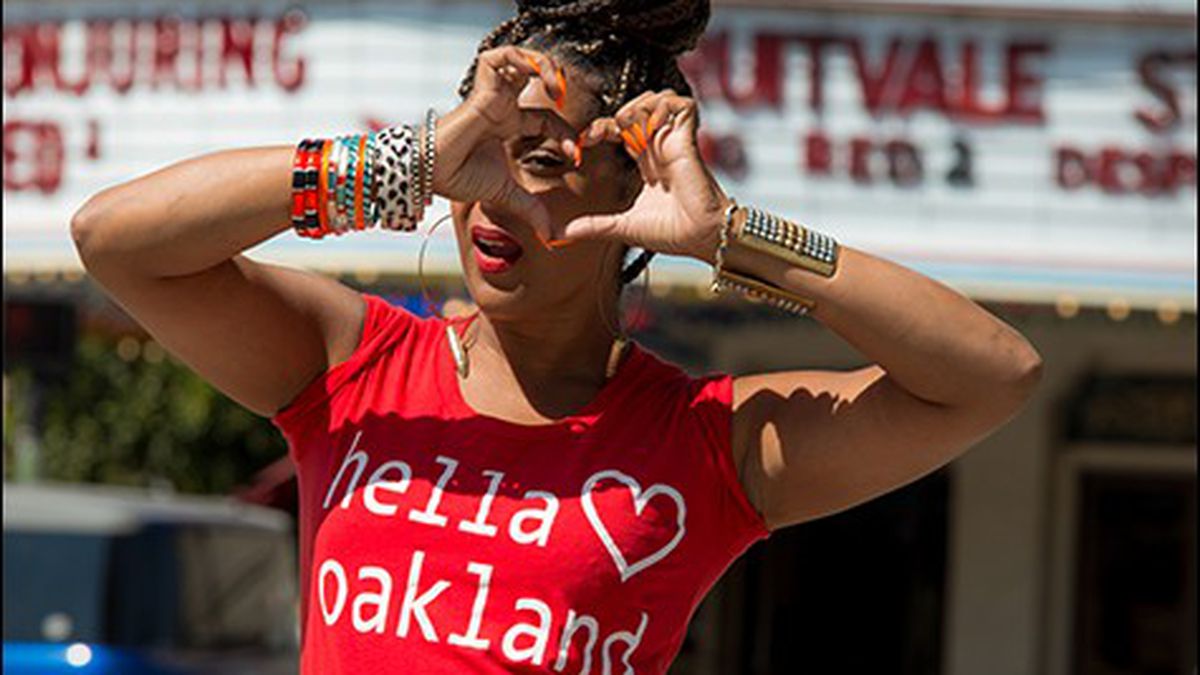 The Woman Behind Big Freedia

Oaklander Renee Moncada-McElroy is helping turn the Queen of New Orleans Bounce into a household name.

Renee Moncada-McElroy has an ageless beauty about her: Sitting at Geoffrey’s Inner Circle on a recent Wednesday, with braids coiled on top of her head, wearing tight jeans and a blue patterned shirt, the 46-year-old looked less like a mother of four and more like Beyoncé on vacation. But it’s not her looks, it’s the strength of her presence that’s most impressive. The woman exudes so much self-confidence that when she says, “I’m going to be the next big thing coming out of Oakland,” it sounds neither like a brag nor a hope, but rather a writ-in-stone fact.

Moncada-McElroy is the businesswoman behind Big Freedia, aka the Queen of New Orleans Bounce, which is a style of hip-hop known for its frenetic beats, twerking dance moves, and crowd-energizing call-and-response. She’s the subject of a new reality show, Big Freedia: Queen of Bounce (which premiered October 2 on Fuse TV), which will document Freedia’s artistic process, neighborhood roots, and journey to make it big. Not only will Moncada-McElroy be featured on the show as Freedia’s manager, but she’s also the executive producer and the engine behind Freedia’s expanding brand.

Geoffrey’s Inner Circle is an apt location for the Bay Area native to think about her trajectory over the last twenty years. She used to work at the club as a cocktail waitress in the Nineties, when her first daughter was still a young child. She said when she first got pregnant, at age eighteen, people pressured her to give her baby up for adoption. Instead, she decided to keep and raise the child with her boyfriend at the time. “The social workers came in and they’re like, ‘You can’t keep the baby, you’re not prepared, you’re too young!'” Moncada-McElroy recalled. “I was like, ‘I don’t care, I’ll find a way.'” Not that it was easy: Unable to afford a crib, she said she instead used the bottom drawer of a dresser, padded with blankets.

Still, Moncada-McElroy had dreams of working in entertainment, and for years she shuttled between New York and Oakland to pursue a career in acting and media. But she put her ambitions on hold again when she married the musician and music producer Thomas McElroy (who’s most famous for co-producing the Oakland quartet En Vogue), had three children, and stayed home to raise them. After her kids were grown enough, she landed an unpaid internship at Michael Hoff Productions, a television production and programming company in Emeryville. She rose quickly through the company’s ranks, and was soon producing documentaries and reality television shows like Chain Gang Girls and Man vs. Fish.

A few years later, around the time Moncada-McElroy started feeling a bit weary of reality TV production, she read an article about Big Freedia and the exploding bounce scene in New Orleans. In 2010, bounce was still on the outskirts of mainstream hip-hop, but in Louisiana, Big Freedia, the self-proclaimed Queen Diva, was killing it at nightclubs, one sexually charged and energetic set after another.

Moncada-McElroy believed strongly that, er, behind Big Freedia’s booty-popping act, there was artistic depth to the artist (born Freddie Ross), who, despite his humble beginnings and sexual orientation, was taking over the New Orleans airwaves with hits like “Azz Everywhere.” “[I was] just looking at a photo of him and thought, this person looks hella interesting, and two weeks later I found myself in New Orleans with a camera.” (Freedia identifies as male but uses the female pronoun for her stage persona.)

Believing that she had discovered the perfect charismatic character for video, Moncada-McElroy pitched a Big Freedia documentary to Hoff Productions. “They passed on it,” she said. “They didn’t get him.” So she decided to produce the documentary through her own company, RMM Media.

“I just think that people, when they look at him they go for the obvious: He’s gay, he’s flamboyant, and you know, it came off kind of cheeky and campy,” Moncada-McElroy said. “But I saw something in him that had more depth to it: He used to be fat, he’s gay, post-hurricane Katrina, a black gay man, and you see the culmination of all that on stage, but you really don’t understand what you’re seeing. I just think people weren’t asking the right questions. Like, ‘Where does this person really come from and this music?’ ‘What makes it so infectious?'”

Big Freedia said that he developed a close relationship with Moncada-McElroy during their initial work on the documentary, and so just six months into the project she started co-managing his act with promoter Melvin Foley. “We [Freedia and Foley] started to know her and trust her during filming,” Freedia said. “I work hard, you know, I’m always working, and Renee does, too.” Moncada-McElroy also had the industry connections to help expand Big Freedia’s bounce music beyond New Orleans’ borders. Soon after the three formed their partnership, World of Wonder, an international entertainment and television production company, approached Freedia to do a reality TV show, and Moncada-McElroy found herself executive producing the show and also appearing in it, something she was hesitant to do. “The challenge was being in front of the camera and being exposed, for both Freedia and for me,” she said.

Despite her nervousness, Moncada-McElroy felt the world would respond to Big Freedia, and so they signed on to make the show and take bounce worldwide. “Freedia is an artist,” said Moncada-McElroy. “I think he’s not just an entertainer, and people may argue with that, and say, ‘He’s not an artist,’ but he is art. He’s what you call performance art. That’s what good art does — it changes people’s minds about what they would normally think about something. People talk about him, they look at him and frown, but they just can’t fucking turn away.”

Moncada-McElroy also hopes that her presence on the show as a successful African-American woman will serve as a model for younger black women, especially in television, something that she feels is missing from the entertainment industry in general. “I really hate seeing black women fight on TV,” she said. “It bothers me. And cuss and act ghetto and act stupid. I hate it! I have daughters, they have friends, I have people in my family that are females that look up to me. I’m gonna carry myself in a certain kind of way.”

It appears that the Bay Area native’s initial instincts about Big Freedia and bounce were correct. Bounce and twerking, the music’s accompanying booty-popping dance, are having a moment, and surprisingly, it was a white, twenty-year-old former Disney star who introduced millions of Americans to it. Last month, Miley Cyrus caused a stir with an enthusiastic attempt at the booty-shaking dance on the MTV Video Music Awards stage. In the deluge of reactions that followed, some called her a slut and others dubbed her racist, but Big Freedia is supportive. “Miley opened another door for bounce music, [by bringing it into the mainstream],” Freedia said, but added that, as an artist and New Orleans native who has produced bounce music and represented twerking culture for decades, it was frustrating to witness a pop star, in one evening, emerge as the “face” of twerking. “A lot of people [in New Orleans] were really upset,” Freedia said.

Ultimately, however, Big Freedia and Moncada-McElroy believe that bounce music and twerking are for people of all races, ages, genders, and sexual orientations. Recently, they set out to prove just that by breaking the Guinness World Record for the largest number of people — 358 — twerking simultaneously. (The previous record was 250.)

For Moncada-McElroy, the event also helped solidify Freedia’s stature in twerking culture. “It was fun to see so many people come out, all ages, shapes and colors,” she wrote in an email, “and the Guinness Book rep there just made it that much more official as to who really is at the forefront of this twerking phenomenon. Done deal.”

Women in the Eye of History