A new pop-up art exhibit takes advantage of a building's transition from a medical office into residential housing. 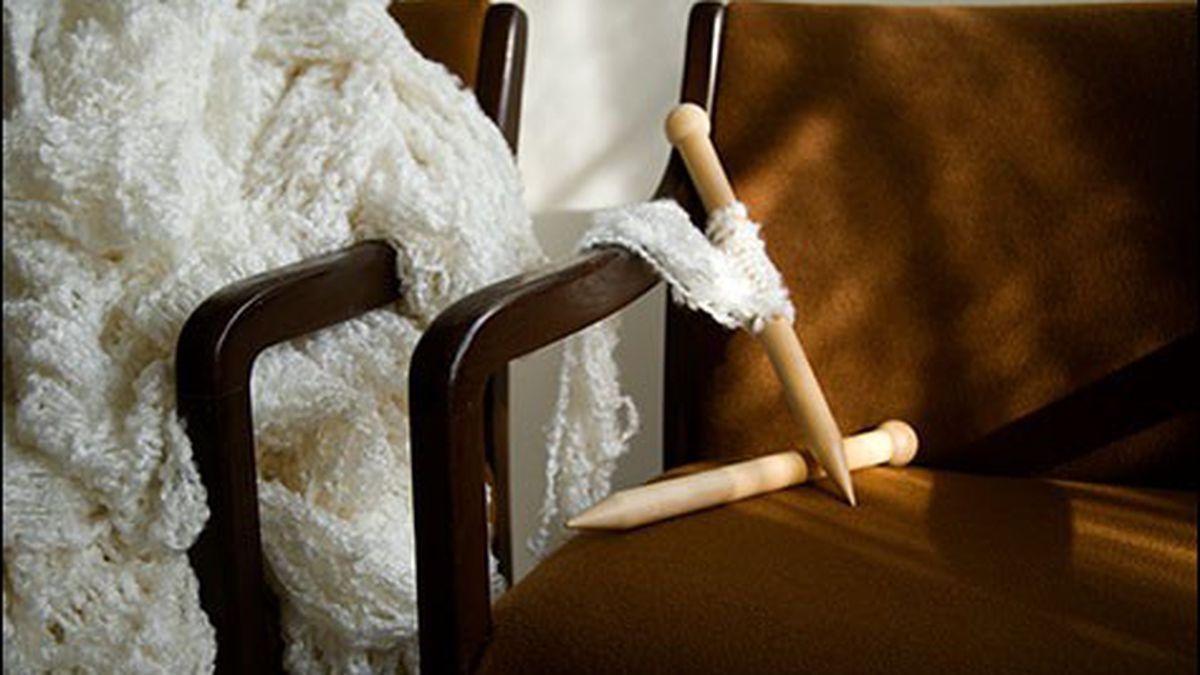 The pop-up art show ArtComplex may inhabit a former two-story medical building on Pill Hill, but step inside, and it’s anything but clinical-looking. To the left of the entrance, in what used to be a waiting room, you’ll find a nearly ceiling-high heap of knitted ivory yarn (nineteen miles’ worth, to be exact) piled next to a pair of office chairs, where you can sit and knit if you’d like.

There’s a palpable sense of time as a concrete object, as evidenced by a stack of old men’s magazines; by the cheesy, muzak versions of Nirvana and David Bowie songs playing overhead; by the dust shadows on the wall where art used to hang. Above the two doors are signs reading “Death” and “Eternity.”

Though playfully mocked in this installation by artist Modesto Covarrubias, the concept of time seems to be the organizing principle for ArtComplex — both its gift and its burden. During the exhibit’s open hours, weekends from January 18 to March 23, visitors can explore twelve rooms featuring twelve different Bay Area artists working in video, painting, performance, sculpture, and more. But when the exhibit is over, the entire building will be converted into residential housing.

“There are often empty storefronts, empty for one reason or another, going through the permit process with the city,” said Bill Bagnell, who co-owns the building. “Why not use them for art? What better thing could you do with them?”

Bagnell, a former president and current member of the East Bay Rental Housing Association, said he hopes ArtComplex will pave the way for other property owners and managers to open up their buildings for use by local artists on a wide scale. “I think it’s something a lot of people would be willing to do, they just haven’t thought about it,” he said.

Pop-up shows like ArtComplex are not unheard of, but when they do happen, they’re generally born of transactions between friends. The event’s organizers, artists Ernest Jolly and his wife Chris Evans, learned of the building from Bagnell, who is a close family friend. The project was hatched during a conversation over dinner in late 2013, shortly after the building’s purchase. Jolly and Evans agreed to a few lease details: They would provide their own insurance, monitor access to the building, and take out what they brought in. They’d also pay a nominal $1 monthly rent.

The fact that ArtComplex revolves around often-invasive installation art makes the project all the more suited to the good graces of trusting property owners. “This is not just about hanging paintings on the wall or placing sculptures on pedestals,” Jolly said. Carpets were ripped up, rooms were painted a deep blue, fragrant dried pine needles were plastered to the walls. Some artists, like Covarrubias, are responding directly to the space by incorporating the myriad skylights, doorways, closets, and reception desks.

Installation art’s inherent resistance to being collected (a major appeal for artists working in the form in the 1960s and ’70s) can make it unappealing for commercial galleries. “It’s hard as a collector to buy installation art, unless you have an empty garage on your property,” said Marianna Stark, one of the show’s organizers, who is also a board member of Oakland Art Murmur and the Berkeley Art Center.

ArtComplex is also something of a “test run” for Jolly, who is seeking to change the dynamic between collectors and installation artists. Part of that effort involves showing collectors that these artists aren’t necessarily a rogue, unpredictable breed, and that they can be more like interior designers.

Although ArtComplex‘s beginnings were serendipitous, the show had to come together very quickly. Jolly and Evans reached out to several artists, who agreed to be part of the show, and then had to visit the space, write up their proposals, and finish their installations over the course of two weekends.

Funding also remains a hurdle, but not an insurmountable one. ArtComplex‘s Kickstarter campaign is far from raising its goal of $5,000 — to pay artists’ honorariums and to cover insurance and utilities — although the show will go on regardless of whether enough money is raised. (ProArts is the project’s fiscal sponsor.)

Judging from ArtComplex‘s early stages of installation, the show is set to be a success, buoyed by a talented roster of imaginative, thought-provoking artists. Oakland-born artist Karen Seneferu’s second-floor installation explores the dualism of private and public spaces and how the status of people of color changes in those spheres.

The video projected on the wall depicts unspeaking “black faces and eyes gazing out on a public they didn’t have access to,” said Seneferu, who said she wanted to create the sense of an institutionalized setting. “I want the room to feel like a room in a museum, but when you go into the closet [where a memorial is set up], you feel like you’re in someone’s home.”

In a first-floor installation, her husband Malik, a Bayview-Hunters Point native, similarly deals with social issues, through a series of large, bright paintings and beautiful, glittering assemblages he calls “mobile shrines.” Made of commonplace items culled from dilapidated homes and modified into spiritual objects, these shrines are his answer to the ongoing gentrification throughout the Bay Area, he said.

And if Covarrubias gets his way, there’ll be a drag queen dressed in a nurse’s costume walking by the waiting room periodically and calling out dead artists’ names. “Can you just imagine someone coming around yelling,” ‘Cage? John Cage?'” he said, laughing.

It’s possible that in the future more Bay Area artists like Covarrubias will be able to participate in installation art-friendly pop-up shows like ArtComplex once more organized channels emerge for building owners and show organizers to work together. For now, Bagnell said the initial hurdle is making artists and property managers aware of the possibility of such a collaboration.

Until then, Covarrubias’ meditation on “the whole ridiculousness of waiting” seems instructive, as ArtComplex opens its doors and gleefully marks off time, living in the funny, transient, and liminal space between the building’s past and future lives.

Editor’s note: The previous version of this story incorrectly stated the end date of the exhibit; it’s March 23. Also, ProArts is not providing funding for the project but is its fiscal sponsor. This version has been corrected.