The Oakland First Fridays street festival attracts thousands of people to downtown and offers an economic boost to restaurants, bars, and participating vendors. For art galleries, it’s a different story. This is according to a new report released today by the Koreatown-Northgate (KONO) community benefit district, the financial sponsor of the popular festival. As the Express has chronicled, the monthly event has gone through a complex evolution in recent years, most notably when Oakland Art Murmur, the nonprofit entity that represents dozens of art venues, stopped overseeing and paying for the closure of 23rd Street in 2012. The street party, however, did not stop. As a result, the massive event has continued without consistent leadership and without stable funding, prompting regular threats from city officials of a potential shutdown.

Supporters argue that the event has improved Oakland’s image and economic development — and now they have some survey data to support these claims. (We’ve reported on the early findings of this study before, most recently in an article on a new fundraising campaign for First Fridays).

The results are not all that surprising: Some businesses in the neighborhood profit from the event, which, according to the report, attracts more than 10,000 people each month. Swift reached out to hundreds of people and ultimately collected responses from the relatively small sample sizes of 36 business owners, 30 First Friday vendors, and 61 attendees. 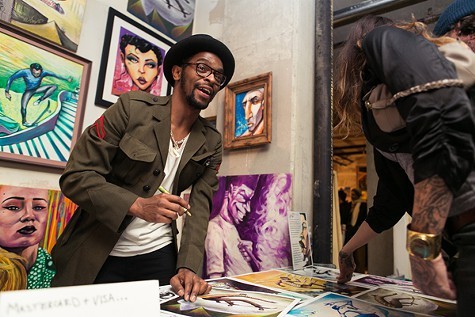 It is, however, the bars and restaurants that appear to benefit the most; one restaurateur said he makes 70 percent of his monthly profit during First Friday, the report noted. Business owners who actively take advantage of the monthly influx with various marketing efforts tend to benefit more, the report added: “Creative approaches include things like setting up display tables in the event footprint enticing attendees to stop by their business location, setting up large sampling spaces in front of buildings, and selling alternative menu items.”

Of the brick-and-mortar businesses, 61 percent of owners said the event affects staffing decisions, with most noting that they hire additional staff to meed demands during peak event times, the report said.

Other noteworthy findings directly from the report summary:

-The event has created a business incubator space, providing unique opportunities that allow new entrepreneurs to enter the vending market at minimal cost. Thirty-eight percent of vendors report Oakland First Friday as their first event; of those first-time vendors, all continue vending at other events throughout the city.

-The event generates a consistent income vendors rely on; if the event no longer continued, 48 percent of vendors would need supplemental income.

-Attendees are coming from all across the Bay Area to spend money in Oakland, creating a retail surplus. The average attendee spends $80 per visit on restaurants, shopping, and transportation.

-BART officials report ridership increases by 5,000 individuals at the 19th Street Station on nights of the event.

The event does not seem to offer much of a boost to the galleries that open their doors during the festival. Swift wrote: “It is important to note that Art Galleries reported extremely low revenue for event dates. The majority of transactions created from patrons that visit during Oakland First Fridays occur after event dates according to Art Murmur executive director David Abernathy.”

This has created some tensions, due to the fact that the galleries that first brought the First Fridays concept to Oakland — with the purpose of supporting artists — just aren’t benefiting from the event.

But Shari Godinez, KONO’s executive director, emphasized that the overall economic impact has been positive. In a statement along with the report, she attributed a rapid decline in commercial vacancies directly to First Fridays: “KONO’s vacancy rate went from 47% down to 12% in the last two years and many prospective business owners stated that they wanted to be in the foot print of the Oakland First Friday event.”

You can read the full report here.