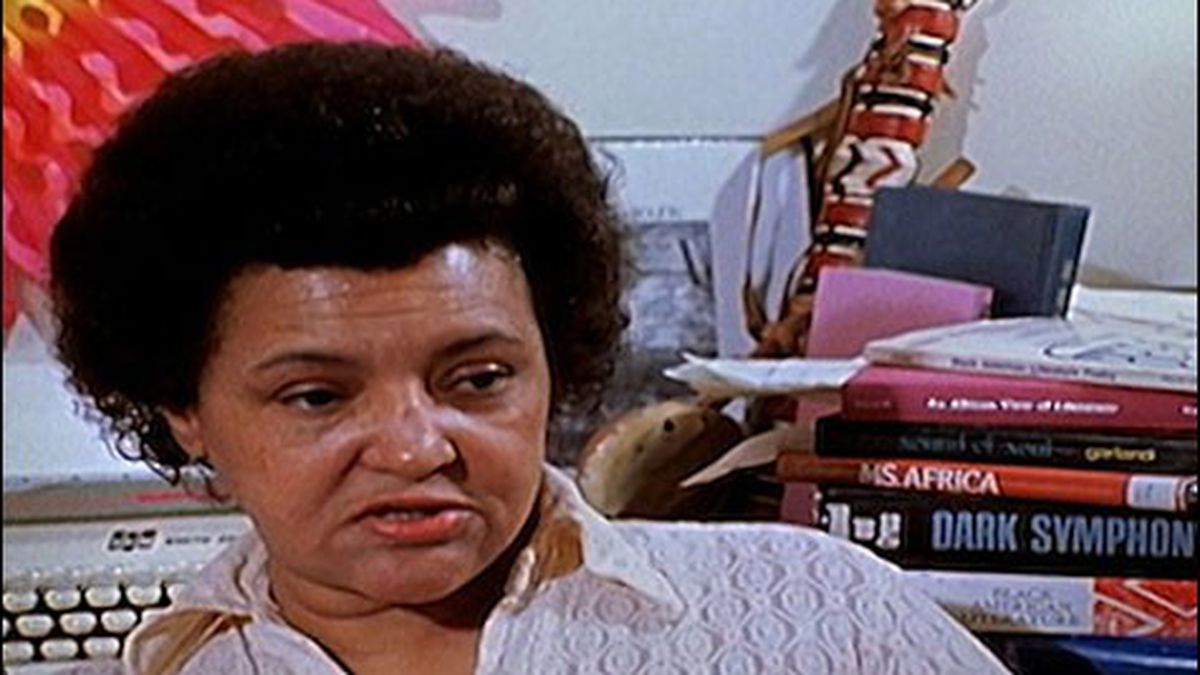 A screening of the newly restored documentary about a leader of the black arts movement serves as a fundraiser for a storytelling project for young men from prisoner reentry programs.

Cheryl Fabio was in her first year at Stanford University’s film school when her mother, Sarah Webster Fabio, a pioneer of the black arts movement of the 1960s and ’70s, asked her to make a film about her. While Fabio was initially intimidated by the idea that her role model’s story would be in her hands, she ultimately embraced the opportunity to capture her mother’s thoughts on film.

Now, almost forty years later, Fabio is hosting a public screening of a re-mastered version of the documentary she created about her mother, Rainbow Black: Poet Sarah W. Fabio, thanks to a grant awarded to the Black Film Center/Archive at Indiana University from the National Film Preservation Foundation. “As far as I know, these are the only moving images of a local writer who had a national impact,” said Fabio. “Whether it’s a great film or not, it is sweet to have preserved that image.”

The film depicts the life and work of Webster Fabio, who died in 1979, through interviews and clips of her recording poetry albums for Folkways Records. The poet and educator is often credited as being the “Mother of Black Studies” for helping establish programs at UC Berkeley and Merritt College in the 1960s, and the film portrays her as “a spirited woman, sassy one minute and scholarly and critical the next minute,” said Fabio.

The screening, which will take place on Sunday, January 19, at The New Parkway Theater (474 24th St., Oakland), will also serve as a fundraiser for a project Fabio is working on with the nonprofit she is trying to get off the ground, the Sarah Webster Fabio Center for Social Justice. Fabio was initially inspired to create the center back in 2003, when her son was attending high school in Emeryville. “I didn’t see a place for kids to learn how to use technology creatively,” she said. Taking cues from her mother’s cultural activism, Fabio wanted to start a media center for young adults where they could learn how to express themselves. When the economy took a turn for the worse, Fabio took some time off from the endeavor, but has now renewed her efforts to get the center up and running. Her first project, which she hopes to start working on with the Center for Digital Storytelling in May, is to help former prisoners re-entering society tell their stories through multimedia, such as music and photographs.

Her hope is that audience members will come away from the screening with a sense of the way her mother’s mind worked. Having taped the bulk of the film during a 48-hour marathon filming session in Iowa, Fabio acknowledges there are many unpolished moments, such as when her mother is being interviewed while wearing a bathrobe. However, she remains proud of the result. “It’s very personal, it’s very moving,” she said. “Even though as a filmmaker I would make a very different film today, never for a minute do I regret having made that film.”