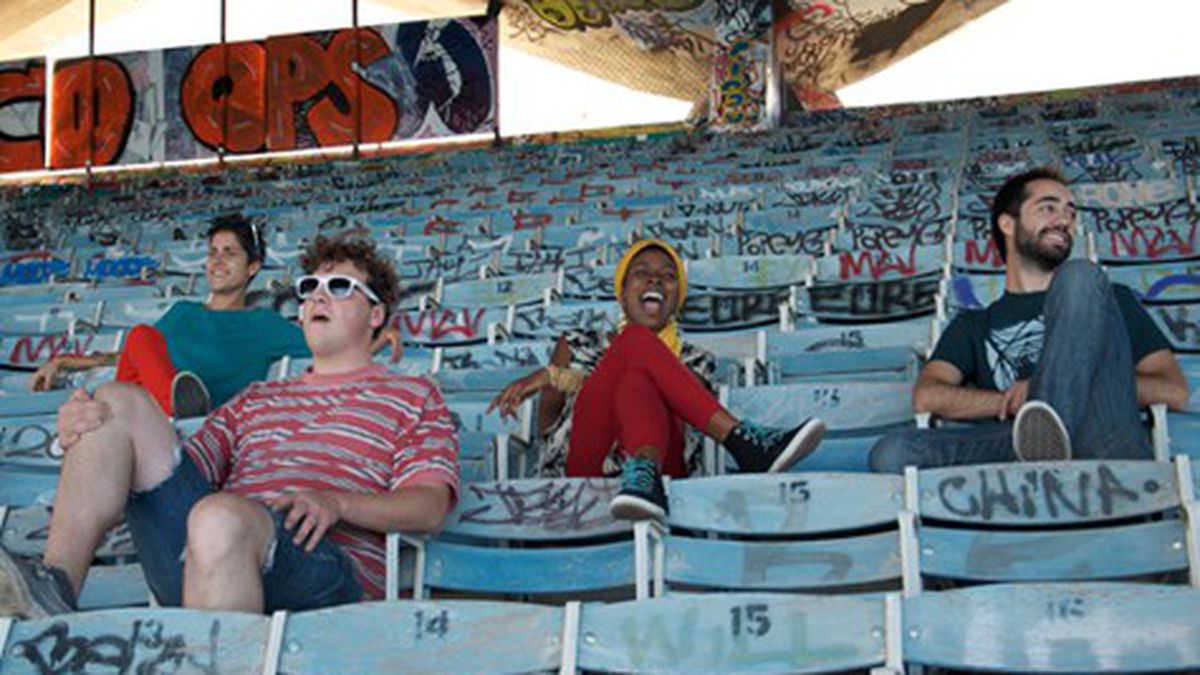 The United Rhythm of Bells Atlas

Strong bonds among the Oakland band’s members have transformed it into a powerful live act.

When nine musicians with enormous drums appeared on the balcony of The New Parish during Bells Atlas’ recent show, they were barely visible to most of the crowd. It was late in the Oakland band’s set, during the new track “Capable People,” but when the batería (the percussion section of a Brazilian samba band) joined in, it created an infectious high — a cathartic feeling that adequately captured the sense of accomplishment the band achieved upon releasing its self-titled debut album on June 18, after two years in the making.

Judging by the polished performance, it felt as if the band had rehearsed this collaboration for weeks, but rehearsals started only a week and a half before the show. The idea had been brewing in Bells Atlas drummer/percussionist Geneva Harrison’s head for several months. Typically, baterías perform with dancers in the street for days on end at Carnival. Harrison wanted to try to capture the raw energy that such a large drumming group can bring to the live experience, and lead vocalist Sandra Lawson-Ndu thought it could add to the “fullness” of the band’s music.

However, the week leading up to the performance was hectic, recalled guitarist Derek Barber on the blindingly sunny morning following the show. Despite the rehearsals, all the performers hadn’t actually been in the same room at the same time. “Is it going to work? Is something going to train wreck?” Barber said he wondered as the band began to launch into the song at The New Parish. “This is crazy!”

It turns out it wasn’t. But such creative risks are one of the hallmarks of Bells Atlas’ live shows, setting it apart from other young bands. Locally, people have taken note: Bells Atlas has booked upcoming gigs at the Redwood Grove Concert Series on July 25, The Independent on July 28, Brick and Mortar Music Hall on August 17, Oaklandish on September 6, and The Hemlock Tavern on September 13.

What most defines the band’s style, especially live, is its seamless vibing and sense of rhythm. Its sound escapes easy categorization, but includes elements of samba, West African highlife, post-rock, soul, and indie rock. In a live setting, it’s hard to pin down exactly what sounds are coming from which member, as the pace and style of the songs change quickly, often in unexpected ways.

The four musicians in Bells Atlas met in 2011, and they’re all transplants to the East Bay who moved here for common reasons: the diversity, open-mindedness, creative community, and good weather. Lawson-Ndu and Doug Stuart originally played together as a duo, with Stuart on upright bass, after she approached him at Guerilla Cafe. Stuart went to college at the University of Michigan in Ann Arbor with Barber, who joined soon after. They performed together only once as a trio. Harrison, who had just moved to the Bay Area and had recently been hired at Guerilla Cafe, saw the band play there, and knew she had to become a part of it.

The band’s lush sound is further set apart by Lawson-Ndu’s enigmatic vocals. Her smooth, rich voice anchors most of the new album’s tracks, almost as if she’s whispering directly into your ear and, by extension, your core. Although Bells Atlas sounds at first like a life-affirming pop album, a closer listen reveals there are darker, more complex lyrical themes of mortality and loss that bubble beneath.

According to Lawson-Ndu, her singing is directly inspired by the stories she hears in the “worlds of music” each member creates. “What’s awesome about this band is that when we say that we all bring something to the table, it doesn’t just have to do with our own instruments,” Lawson-Ndu said. “We really collectively talk about all the sounds that are happening. It’s not just about what we have our hands on.”

“There’s just enough of an overlap between everybody that it ties it together,” Harrison added. “I feel like I share a thing with Derek with the elements of post-rock and punk rock — not that that necessarily comes out in our music, but there’s an edge I feel we share in rock music. With Doug, I feel a connection between soul music and groove and also fourths — the interval of fourths, of the earth, of pentatonic scales. And with Sandra, I feel rhythmically there is such a bond there, and the cultural influences of West Africa and Brazil.”

It’s clear that the band has grown close over the past two years. “Outside of the band does not exist,” Stuart declared emphatically.

Harrison concurred: “It’s a family, it’s a relationship — it’s this ever-evolving getting to know each other as musicians and as people. It’s very webbed and deep, our connection with each other.”

Before it got too warm and fuzzy, Barber joked, “When you said that I thought of like a duck-billed platypus — webbed and deep.”

And they all laughed, in unison.