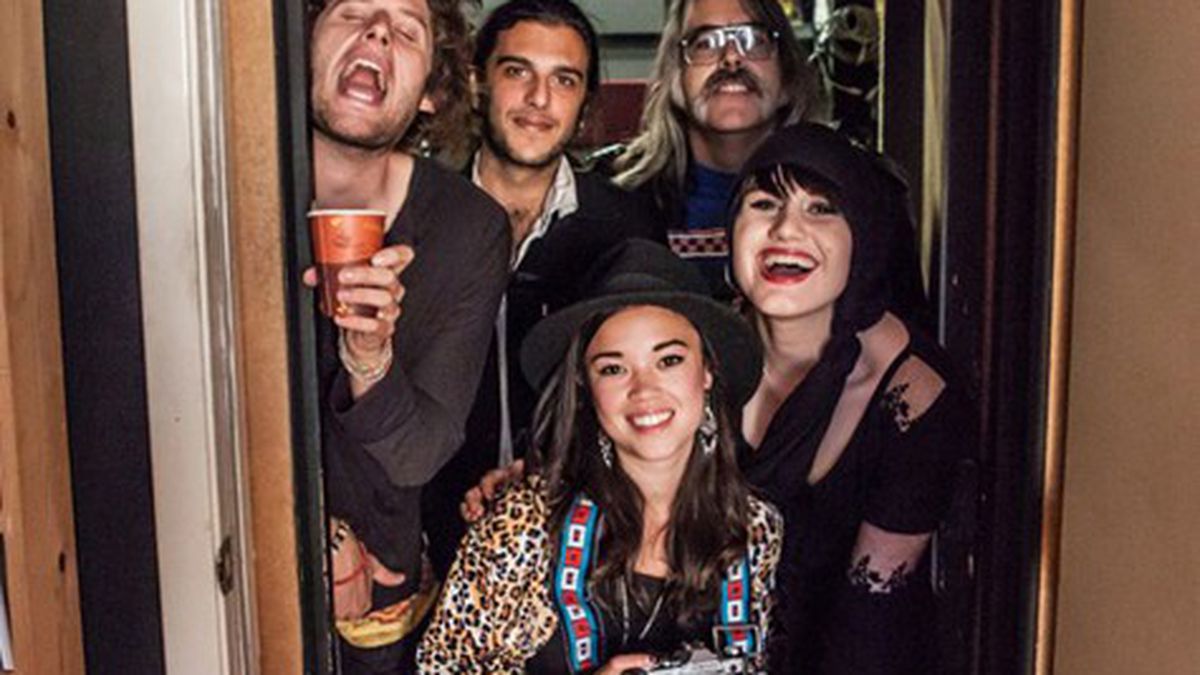 The San Francisco trio tours the country in a magic bus with a massive entourage.

The Coo Coo Birds were at a checkpoint in McAllen, Texas, when they thought they were about to get busted. Riding in their bright-red 1995 Thomas Built school bus retrofitted with a stage, custom windows, two stripper poles, and dragons spray-painted along its sides, they were stopped by police, whose dogs perhaps caught a whiff of their contraband. According to drummer Ryan Zweng, who recalled the story recently, the trio began ingesting the drugs. When the officer approached, the San Francisco garage rockers explained that they were musicians — though with all the dog barking and the fact that they were “super high,” the right words were hard to find.

“What kind of music do you play?” Zweng said the officer asked them.

They dubbed their good fortune “psychedelic immunity.” Whether or not you believe them, Coo Coo Birds have apparently had a lot of such luck recently: After playing their first SXSW, where they performed on and off the bus, for scheduled shows and impromptu ones, they’ve been traveling around the Southwest. Guerilla performances around Austin got the attention of The New York Times‘ ArtsBeat blog, where they were mentioned alongside The Yeah Yeah Yeahs and Iggy and The Stooges, just before KQED’s “The Do List” aired a sample of their “fuzzy guitars.” Host Cy Musiker said they made him feel “kind of dirty in a good way.”

Although Coo Coo Birds have recorded three albums in the past year and released one, their recent US tour was their first. It included gigs in Los Angeles, Vegas, Phoenix, and Marfa, Texas, on the way to SXSW. After the festival, they headed to McAllen, then to Little Rock, Memphis (where they recorded their third album at legendary Ardent Studios) and New Orleans — and back to McAllen, hometown and fan base of Coo Coo Birds’ bassist Charles Gonzales, where they played fifteen more shows. They’ve drawn crowds of several hundred in McAllen, and one local family donated its RV to the band, just in case they should need another vehicle. “We kind of flew in and played as many shows as possible,” said Zweng. “People get to know us that way.”

This weekend, July 4 and 5, they are hosting what they’re calling “The First Annual Coo Coo Fest,” in which they’ll be performing on the bus and at local venues around Lake Tahoe. On July 6, they’ll be back in San Francisco to open for White Denim at The Independent and celebrate the vinyl re-release of their first LP, Don’t Bring Your Boyfriends, which is being put out by Feedbands, a subscription service that sends its members limited-edition records once a month.

Coo Coo Birds booked their first gigs in 2011 at San Francisco strip club the Condor Club, where they played Friday afternoons before the strippers showed up. It was an appropriate venue; their songs are about drugs, girls, and likening girls to food, as in “Peach Bottom Girl” and “Marshmallow Pie.” Why the comparisons? Zweng, who goes by the nickname “Rock ‘n’ Roll Animal,” a tall, skinny, energetic twentysomething, explained with a laugh, “I have a big appetite.”

The trio formed when bassist/producer Gonzales was recording guitarist Jonathan Shaheri’s gypsy-jazz demos. Zweng, who had been living in France, met Shaheri at a party in San Francisco, where they had jammed in the basement. Back in France, he woke from a dream of Shaheri playing the piano “like a rock star” and decided to return to the Bay Area to seek him out. Coo Coo Birds came together at the Condor Club, but the Convent — the twenty-plus member San Francisco arts collective where Shaheri and Zweng have been living for almost two years — inspired most of their work. When Zweng first visited Shaheri at the Convent, they composed (and then forgot) the chorus to what would eventually become the song “Convent Girl”: It wasn’t until Zweng moved in to the arts collective that they remembered the chords and rewrote the song, a catchy, iconoclastic ode to roommate-on-roommate lust, and one of the better tracks on Don’t Bring Your Boyfriends. “Rumor has it ‘Convent Girl’ is about Nicole,” said Zweng, “Then we added the names of the other girls.”

Zweng was referring to videographer Nicole Salmeri, a roommate from the collective who films most of their gigs. Between the Convent and the bus, the band has developed a significant entourage, a bohemian group that expands traditional roadie-dom to the point where the crew seems as much a part of the band as the musicians. Most of them earn their passage: “Rock ‘n’ Roll” Nicole and “Hotter Than Hell” Joelle Wagner consolidated the Coo Coo Birds’ everyday mayhem into a still-unreleased reality TV series that convinced the camera company GoPro to equip the band with cameras and gas money for its trip to SXSW.

“People just stay on [the bus] with us,” Zweng said. “This kid Loc showed up in LA and started carrying our equipment. I think he’s still living at Dimonds’ house.” Neil Dimonds is a surfer from Santa Cruz who once worked as a tour bus driver in Hawaii. Dimonds, who often wears a taxidermied fox puppet with quartz eyes, bought a bus in August 2012 to ferry a group of friends to and from Burning Man. He met the band at the Convent, offered to let them play in the back while cruising around the Bay picking up strangers, and now serves as an unofficial manager on tour.

The concept of the magic bus and its revolving door of Merry Pranksters dates back to the Sixties, and the Birds have put a modern spin on it. They’ve replaced Ken Kesey’s acid-laced spirituality with neo-hippie indulgence: having fun. “We want to take their model and expand upon it,” Zweng said of the Pranksters, amid the tumult of trying to get to a show. Shaheri added: “Dude, they just drove around on a bus. We’re way crazier than what they did!”

The band is willing to admit to delusions of grandeur. Zweng laid out his vision for the next tour: “We’re going to Latin America, adding new vehicles to our fleet. Our goal in five years is to do an international waters tour, take a retired aircraft carrier from the Chilean Navy, do a completely sea-based adventure.” It sounds unlikely, but then again, they already have an RV and two more recorded albums to release and promote.

Coo Coo Birds’ music has been called garage rock, party rock, and psychedelic. It’s all of that, with echoes of Fifties surf, a debt to The Kinks, and occasional contributions from The Stooges’ Steve Mackay on tenor sax. All three members contribute vocals, though Zweng and Shaheri switch off as lead, and they give a manic performance. Zweng has a tendency to work his hands bloody on the drum kit, Gonzales clobbers the bass (he’s known for smashing guitars, too), and Shaheri makes complex riffs look easy, often smoking cigarettes and writhing on the floor during shows.

Coo Coo Birds will release Psychedelic Warrior, their second album of playful, dizzy rock, on October 31. It will be followed by the Southern-inspired Mexican Cowboys, which has a more polished sound, given that it was recorded at Ardent, a studio known for hosting bands like The White Stripes and ZZ Top (both Coo Coo Birds’ idols). A fourth album, tentatively titled Sultan of Cats, is practically written but still unrecorded. The guys said it might include a song about a pretty German friend who, in a rare collapse of psychedelic immunity, was pulled off the bus and deported near El Paso.

What Are The Implications of Taxing High-THC Weed?