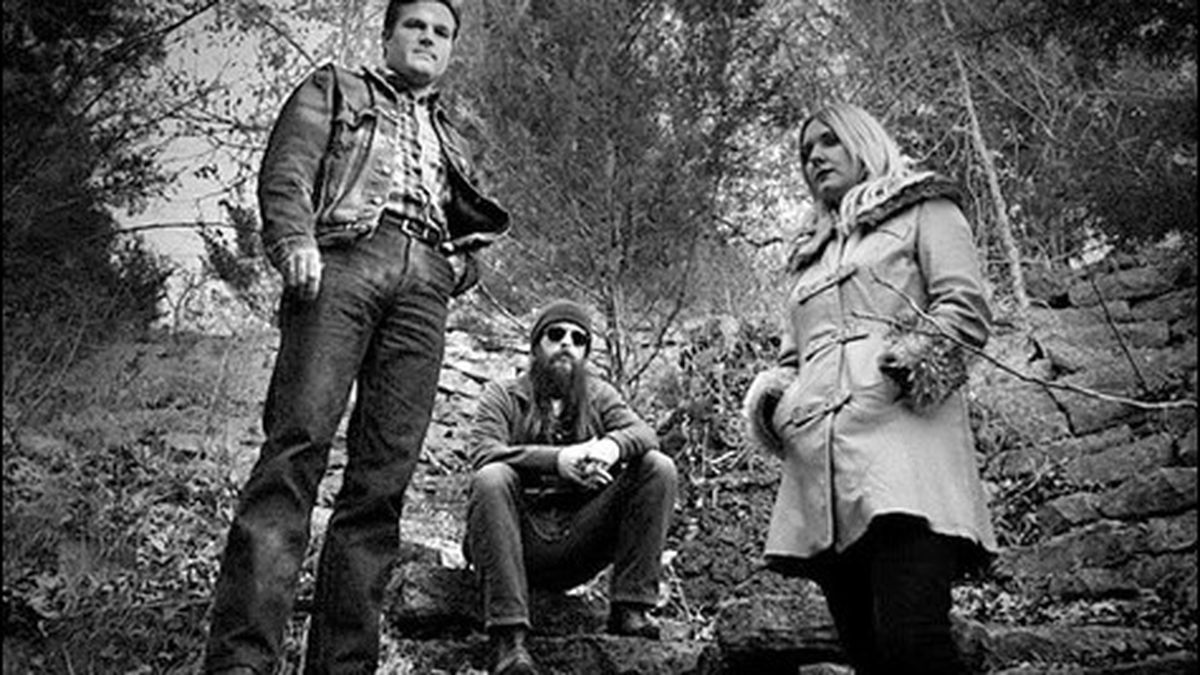 If you weren’t already Facebook friends with the band True Widow, you might not have known that the trio from Dallas, Texas, was playing two shows in the Bay Area in the last couple weeks. And yet, both shows — at somewhat unlikely venues (the Rickshaw Stop in San Francisco and Merchant’s Saloon in Oakland) — had plenty of fans in attendance. Considering that True Widow is still relatively unknown, that’s pretty impressive.

Credit the band’s holistic aesthetic, which extends from its thoughtfully chosen vintage gear to its guitar and bass tones to its music, which is drop-tuned, slow, repetitive, heavy, dreamy, and undeniably ear-wormy. It’s like a heavier, more reverbed, distorted version of Low. Or, as the band has coined it, “stone-gaze.” And while definitely not metal, True Widow’s music tends to appeal to fans in that scene, who often have an immediate, visceral reaction to its songs. San Francisco indie record shop Aquarius Records, which has been an enthusiastic supporter of the band, wrote of its first album: “Literally, from the moment we first heard this record, we have not been able to stop listening to it.” A friend referred to them as “the perfect band.”

That’s a lot to live up to. And, generally speaking, the band didn’t disappoint. At its first Bay Area stop, opening for Portland band Grails on Saturday, September 3, at the Rickshaw Stop, True Widow played mostly new tracks from its second album, As High As the Highest Heavens and From the Center to the Circumference of the Earth. The band stayed true to the recorded versions, and while the album isn’t quite as compelling or catchy as True Widow’s self-titled debut, audience members — largely hipster-metal dudes — nonetheless nodded their heads in approval. A young stoner-surfer-looking couple danced in dramatic gestures near the side of the stage, the guy pantomiming lower-abdomen punches as if the music was making him pummel some imaginary foe.

Bassist Nicole Estill, who trades vocals (but should more) and harmonizes with guitarist-singer Dan Phillips, held the rhythm section down with long-haired and bearded drummer Timothy Starks, whose sparse setup includes no rack toms but a giant 26-inch Ludwig kick drum, five cymbals (plus high hat), snare, and floor tom. Phillips, who’s boyishly handsome and almost preppy-looking save for the tattoos peeking out from underneath his long-sleeve shirt, covering his hands and knuckles, is, however, not the most compelling frontman in the world. As a guitarist and singer, he’s rather subdued, almost mumbling. But then, that’s in line with the band’s whole shoegaze vibe.

Local band White Cloud adhered to a more traditional psychedelic sound, albeit with an extra dimension of rhythmic texture thanks to a second percussionist — a growing trend in rock these days. Headliner Grails was an impressive group of musicians that played ambitious instrumental music, like a jam band from the Neurot school of heaviness.

True Widow’s second Bay Area appearance, last Wednesday night at Merchant’s Saloon in Jack London Square, was a much different experience. For starters, the audience (which was 75 to 100 people strong at one point) contained actual metalheads, with a high concentration of plaid shirts and tattoos. The setting was also far more casual and intimate. The venue is much smaller than the Rickshaw, with a tiny stage that can only accommodate a drummer. That leaves other band members on the floor with nothing between them and the audience save for a mic stand. And that didn’t stop someone’s dog from traipsing among the band’s gear.

Unfortunately, the smaller venue also meant a lesser-quality sound system. Local openers Glaciers, a heavy instrumental post-rock band, suffered the most because of it. The drummer’s kick sounded horribly flat, like a wooden plank being smacked against a wall. And it was the loudest thing in the mix.

This type of instrumental music is tough to pull off, and even accomplished bands like Pelican can be boring live. In Glaciers’ case, the band has too much ambition but not enough chops, songwriting skill, and cohesion to pull it off. The audience clapped politely between songs, but the band effectively cleared two-thirds of the room by the end of its set and left blank looks on those who remained.

Los Angeles trio Moab (labelmates of True Widow) blew Glaciers out of the, er, ice, so to speak. All three members — guitarist/vocalist Andrew Giacumakis, bassist Casey Barclay, and drummer Erik Herzog — were not only accomplished musicians, but they made it look easy, too. The band plays Seventies rock with a giant nod to Black Sabbath. Even Giacumakis sounded like Ozzy with his higher-pitched singing, except that Ozzy couldn’t play guitar and wail at the same time. It was an impressive set, and the audience responded appropriately, cheering and hollering between songs. At one point, a guy in the crowd released an emphatic “Fuck yeah!”

By the time True Widow went on at midnight, the diehards had crowded up front in anxious anticipation. But the venue’s limitations highlighted the band’s weaknesses as well. The lack of proper reverb stripped the band of some of its mystique, and Phillips sounded off key at times (especially when he and Estill tried to harmonize), perhaps due to lack of monitors. He also hit a few wrong notes on his guitar.

The fifty-minute set ended with the band’s strongest and most memorable track, “AKA,” which opens its first album. It was a final reminder of True Widow’s talent, but also of its challenge: whether it can continue to write such compelling material that keeps with its distinct vision, yet still grow as a band.

But even if the trio stopped now, it’s arguable that True Widow would leave a strong impression on the heavy music scene. At least for those who know about it.

Best Samba Class A complex dance made easy, sort of

What You Need to Know About the Fish-Shaped Ice Cream Cones...