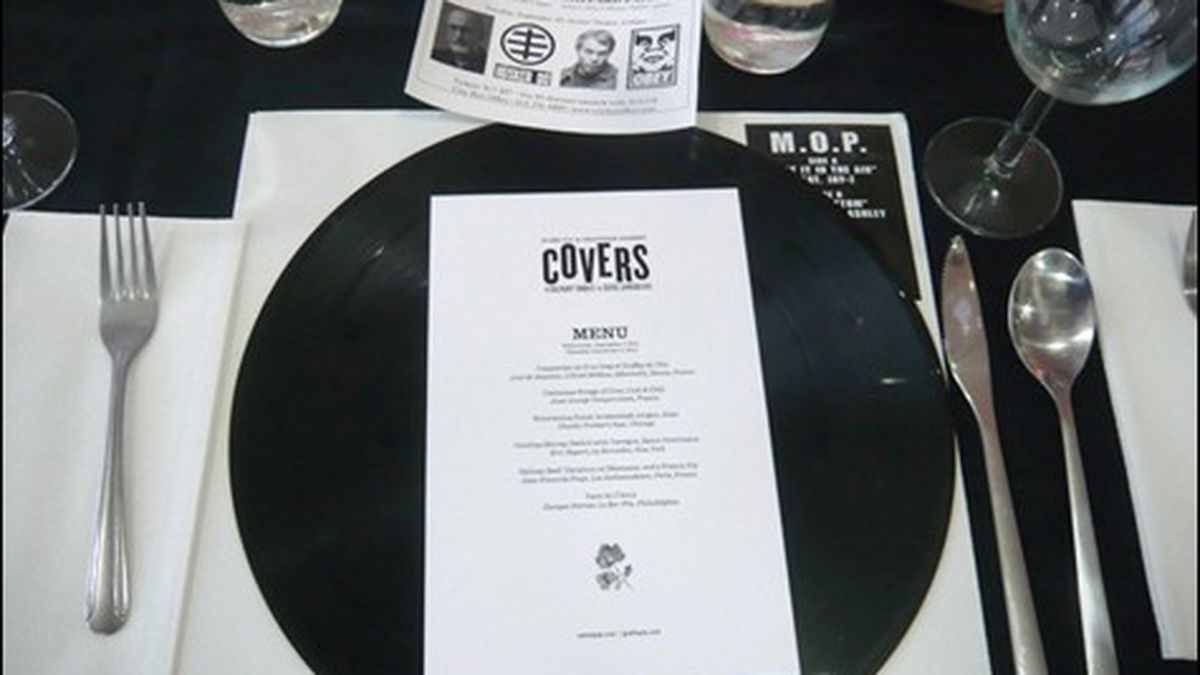 Accounting for Taste with Noise Pop

Festival promoters explore the meeting of music and food.

It’s getting dark in Dogpatch, in the eastern reaches of San Francisco. Outside of an ordinary mixed-use complex, there’s a guy smoking a cigarette. From time to time, a few people amble up, offer him handshakes, and get escorted inside. He leads them through a maze: up a flight of stairs, down a flight of stairs, around a corner, and into a large industrial elevator. The gate is slammed shut and the occupants are whisked up into the building. There, two more hushed ushers in black tees steer guests down one final stretch of hallway, and finally into a cavernous open kitchen.

They’re here to enjoy a gourmet meal presented by the music-festival luminaries at Noise Pop. The “Covers” dinner, a tribute to legendary French musician Serge Gainsbourg, is built around the idea of pairing food with music, instead of those old chestnuts wine or beer: the likes of Arcade Fire and De La Soul with a foie gras-truffle “cappuccino shooter,” Mike Patton and PJ Harvey with dinner, Michael Stipe and Cat Power for dessert — you get the idea.

Such a foodie-indie wedding might seem a bit like an arranged marriage, but anyone who attended this year’s Outside Lands Music and Arts Festival shouldn’t be surprised. The battalion of more than fifty food trucks and local eateries proved almost as much of an attraction as the bands, with hundreds of hungry fans lined up to discover the latest and hottest delicacy. And this weekend in the Mission district, the Rock Make Street Festival will feature tons of local food outlets alongside its all-day music celebration. For many artists and chefs, the pairing is a natural and constructive endeavor. But the result was somewhat mixed under Noise Pop’s purview.

Early on in the meal, a Cantonese potage of corn, crab, and chili and a watermelon salad smeared with horseradish, longan, and shiso were served to capture Gainsbourg’s zestier styles and late-Seventies Jamaican influence. Next, the cuisine took an American turn — Carolina shrimp ravioli with tarragon and sauce Americaine, a creation of New York chef Eric Rupert. The dish was meant to shepherd guests through Gainsbourg’s 1980’s stint in the Big Apple, and though it didn’t really scream “electro-funk,” it was tasty.

For the main course, graffEats rolled out a French dish with flair: Galician beef with fried béarnaise and a bite of fried potato. It was a variation on classic steak frites meant to accompany the big payoff: We finally heard some music from Serge himself. But there was a catch: Whereas the earlier artists had all covered, sampled, or otherwise referenced Gainsbourg, here he was covering other people’s songs.

The $85-a-plate affair was casual and spirited, with about forty people in attendance. Even with less-than-ideal audio quality, the food-music pairings were thought-provoking and added a contemplative layer to the meal. It was a bit of a puzzle trying to connect each song with whatever was in your mouth (some choices were more of a stretch than others), but each had its own “a-ha” moment, giving the meal a biographical outline.

Expanding upon the “covers” concept, graffEats’ seasoned underground chef Blair Warsham covered recipes by his favorite culinary heroes, with a French flair. Thematically, there was a hell of a lot going on. And trying to focus on every element while staying social and sober resulted in a bit of sensory overload. There were times when it all fit together with ease: digging into a piece of rare beef with Gainsbourg’s throaty whisper cutting through the crowd, for example, or sopping up tarte au citrone as sexy renditions of “Je T’aime … Moi Non Plus” and “69 Année Erotique” played in the background. Ultimately, though, if you dished out your hard-earned cash expecting a rich, Noise Pop-curated musical experience, you likely ended up disappointed. It was a strain to get the full effect of the songs over the din of the room.

But the dinner was only one part of a larger trend that Noise Pop is pursuing avidly. The local concert organizers, who have been herding heads into crowded rooms for almost twenty years, and more recently into the great outdoors via the two-stage, two-day Treasure Island Music Festival, are making a concerted effort to include food in their ever-growing program.

In addition to two sold-out dinners held on September 7 and 8, Noise Pop presented another music-food fusion event on Labor Day, teaming up with popular Italian/locavore favorite Flour + Water for what was billed as a “guest DJ night.” Noise Pop enlisted Thao Nguyen, a San Francisco-based songwriter known for both her band The Get Down Stay Down and her frequent collaborations with Mirah. The term “DJ,” however, turned out to be little misleading: The organizers basically asked Nguyen to turn over a nine-hour playlist that would be played throughout the evening, even in her absence.

Terminology aside, Nguyen said it was an interesting experience. She was instructed to let the mix evolve, shifting in mood as the dinner service waxed and waned. Despite the considerable work involved in preparing a nine-hour playlist ahead of time, Thao enjoyed bridging the gap between listening and dining: “It’s the same energy, and it’s the same sort of freedom and creativity,” she said. “Food connects people and brings folks together the same way music does.”

Of her own volition, she’s already put the theory to work. With the help of Bay Area artist-advocacy group Air Traffic Control, Thao designed her own intimate dinner-and-music series called The Supper Club. A recent iteration catered to about 25 guests, included a live acoustic set by Thao, and raised nearly $1,200 for Oakland food activists the People’s Grocery. Thao chose the menu (autumnal stew, shaved zucchini salad, baked pears) and cooked the food herself, capping off the dinner with five or six songs. Since then, Mirah has also curated a Supper Club event, and more are in the works. Thao says that food preparation comes naturally for many of her musician friends and collaborators, too. When on tour, cooking is what she misses most.

Even if this cultural confluence is just another trend, it’s one that feels fundamentally sound. People like food, and they like music. When the two come together in the right way, everyone benefits. And that may well be satisfying enough.