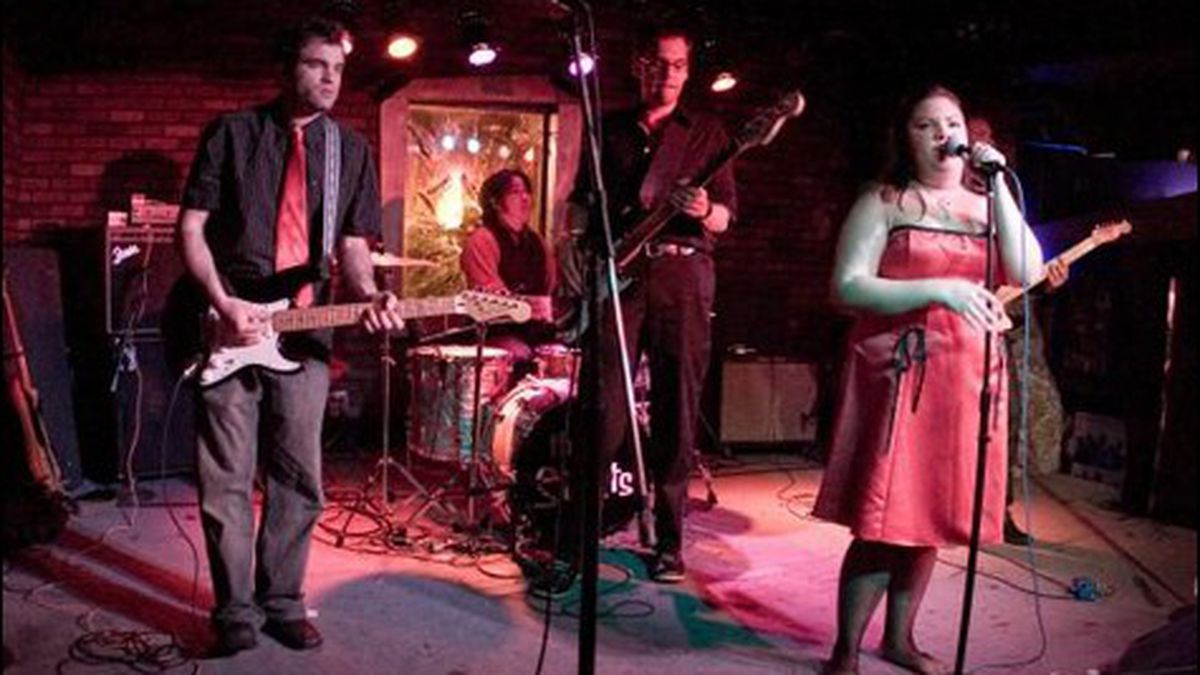 The Struts Got Soul

Without singer Farrah Ancell, The Struts look like a typical four-piece garage band. Four dudes, three amps, a big Brontosaurus of a sound board, one Yamaha drum set, one fantasy football game. The guys started rehearsing back in 2004, barricading themselves — and their gear — in the living room of guitarist Scott Goodell‘s apartment. Eight feet long by eight feet wide, the place sat behind a liquor store, right at the lip of the 580 freeway entrance. For a rockabilly-soul band from Oakland, it seemed like an apt beginning.

Individually, The Struts all spawned from their own separate musical dynasties. Goodell played in the well-known ska band Dancehall Crashers. Rhythm guitarist Emmett Schkloven and bassist Jonathan Lammers anchored a local country band. Drummer Chad Tamashiro played trombone in various ska outfits, and taught himself to drum for The Struts. “He was a hard hitter,” Goodell said, adding that it’s often hard to find a drummer to suit the personality of the band. (Or, as he puts it, the right mix of “personality and restraint.”) “I saw potential in it.”

But The Struts’ secret weapon is Ancell, an East Oakland native with a voice that crackles like an old record player. Ancell formed the band with Goodell shortly after his former outfit disintegrated. Goodell was in a funk, and Ancell was ready to court the muse. She’d grown up singing in show choir and briefly gigged with another rock group called In a Cage. She had chops enough to helm a quintet, but she was new enough to not approach it like a diva. Goodell liked the idea, so they posted an ad on Craigslist and began auditioning personnel.

Old soul never fell out of favor in Oakland, but it was certainly making a comeback when The Struts had their genesis. Local groups like Lord Loves a Working Man and Harold Ray Live in Concert were riding the coattails of a larger revival, spearheaded by bands like Sharon Jones & the Dap-Kings. As retro trends go, soul seemed promising. In some ways, it was a more direct appropriation of black music than rock bands had done in several decades, but the music itself was amazing: smart, hard-edged, bluesy, riff-based, poignant, and infectious. Groups emulated the old style with varying degrees of ornamentation. Some had full horn sections. Others included frivolous elements, like mandatory neckties or a guy banging a tambourine. The best had a singer — usually female — who could conjure the grit of eras past, without sounding like a cipher.

Ancell is one such talent. Raised in a mostly black part of Fruitvale, she grew up listening to disco from her mom, Sixties rock from her dad, hip-hop from kids in the neighborhood, and old blues from their grandparents. Her aunts were hard-core karaoke enthusiasts, so when they came to visit from the Philippines, they’d always bring a karaoke machine along — at that time, it consisted of a huge speaker and cassette player with a microphone. Ancell says that’s pretty much how she got started. “When I was about ten, my dad and mom and sister were all driving down to Disneyland in our big old Lincoln Continental,” she recalled. “I remember that Whitney Houston song ‘The Greatest Love of All’ came on the radio, and I started singing along. My dad almost had a car accident. He was like, ‘What the hell? You can sing? Holy crap!'”

Unlike the other band members, Ancell didn’t amass a huge CV of garage groups and warehouse shows. She went to Catholic school, sang in the show and gospel choirs, and checked out the music at a few non-denominational churches around town. “Honestly, I grew up in East Oakland,” she said. “I had ghetto fake nails, baggy jeans, and big hair. I came more from the rough and tumble ghetto side of town. For a big part of my life I was totally into rap.” But that rough side totally becomes her, say the other band members. “She’s not a prima donna,” Lammers said. The other guys nodded their heads, remembering past experiences with bad-attitude singers. A favorite bit of Struts lore is that Ancell’s middle name really is Diva, wholly by coincidence.

The Stuts cut their first EP in 2005, recording in the basement of Strange Manor, a band house in Richmond. Their repertoire was a mix of obscure covers — stuff by Chuck Berry, Bunker Hill, The Exciters, Larry Williams, or early-period Ike and Tina Turner — and originals that sounded like the obscure covers. They put a Ramones surf-rock spin on the song “Boy Can’t Dance,” which became the title track of their second album (released this month). Ancell worked her voice into a hard, knotty growl that most closely resembles Etta James or Big Mama Thornton. She began ordering old rare compilations from record distributors in Europe. Lammers dug for records at Rooky Ricardo’s on Haight Street. Tamashiro mastered the concept of a “wet” versus “dry” drum sound — basically, by opening or closing the high hat. He got a vintage Ludwig trap set for the band’s live shows.

As time progressed, The Struts got sparser. They tightened up their arrangements, whittled off sections from the original tunes, and used a small rhythm section to emulate a much larger band. With lead and rhythm guitar, they could create the same effect as an organ, without having the murkiness of another instrument. They toyed with the idea of horns and keyboards, but decided against it, opting instead to hire an occasional harmonica player. “The longer we’ve played, the simpler we get,” Lammers said. “There’s still space between every riff — that comes with age.”

It’s also Ancell’s preference. She likes material that errs on the rough side, so long as it has an interesting vocal line. She doesn’t cotton to the Seventies stuff, or anything that’s a little too layered, or funky. One time, the guys tried to cajole her to play a Rolling Stones song, but she wouldn’t have any of it. “She’s the only one who has veto power,” Lammers joked.

She’s the diva, after all.

A Dozen Cousins Wants to Bring Healthy Eating to a Wider...