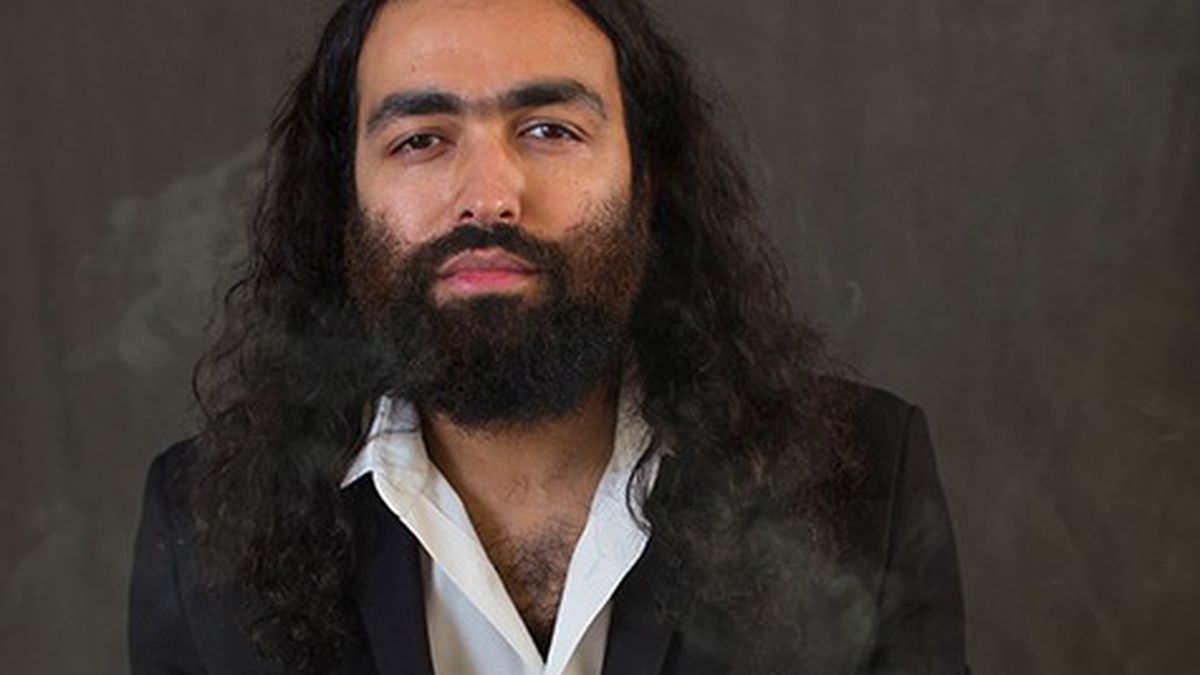 The Serious Jokes of Victor Vazquez aka Kool A.D.

The local rapper on his experimental novel, creative appropriation, and how we need a black James Bond.

Victor Vazquez strode into the Express’ New Year’s Eve photo shoot wearing a baggy Bad Brains T-shirt, its iconic yellow lightning bolt striking the capitol building just above his navel. Then, Vazquez, who raps as Kool A.D., changed into a suit, clutched a champagne flute, and owned the role of reveling year-end extrovert. Vazquez put on Ornette Coleman and rattled off movie commentary between shutter clicks. “I just saw Interstellar and the black guy dies first. I had to look at my phone. Like, is it 2014?” He added, “They need a black James Bond.” Shoulders undulating to Coleman’s free jazz, Vazquez stuck out his tongue.

It was a telling quip that played on the form of its delivery, and the same lyrical trait marks Vazquez’s many solo releases, as well as an experimental novel, O.K., A Novel, forthcoming in early 2015 through the New York publisher Sorry House. His album, Word O.K., released early this year, begins with “Open Letter,” in which Vazquez recycles a couplet from a Das Racist song. Yeah, I said it a second time/jazz, he raps, the admission itself echoing the title of a book, Jazz Anecdotes: A Second Time Around. Later in the track, Vazquez calls attention to his use of metaphor before navigating a series of dizzyingly figurative lines. To conclude, Vazquez glibly mimics the self-aggrandizing of other rappers: Kool A.D. best rapper in the world.

His hyper-referential style isn’t new. Even the central sentiment of Das Racist’s “Combination Pizza Hut and Taco Bell” was retread from a 2006 Kool A.D. track on Electric Kool A.D. Acid Test, which featured boldly pilfered rock instrumentals beneath Vazquez’s rapping. So when did Vazquez get interested in creatively redeploying material?

“Regardless of when, it was already occurring,” he said. “It can be seen as occurring anywhere you look. Postmodernism isn’t just a means of creating, it’s also a critical lens for perceiving and experiencing the world. … If you care to see the world as a network of links, there are multiple realities like that… but whatever.” “But whatever” is Vazquez’s favorite addendum.

Despite his wariness of biographical talk, Vazquez did cite an early, deliberate use of creative appropriation from his high school years in Alameda. “Before Kool A.D., I had some recordings under the name Encyclopedia Brown,” he said. Vazquez, who is of Italian and Cuban descent, copped the name from a fictional 1960s boy sleuth because, he said, “‘Encyclopedia’ and ‘brown.'”

Boy Crisis’ debut album has been shelved by B-Unique because, Vazquez speculated, “I think they were butt-hurt that they couldn’t get a piece of that ‘[Combination] Pizza Hut and Taco Bell’ action. … But who knows.” Done with Das Racist’s upper-echelon indie visibility and the opaque dealings of B-Unique, Vazquez returned to the East Bay.

Seizing newfound autonomy, Vazquez reinvigorated a high school punk band, Party Animal, and published a chapbook of aphorisms called Joke Book. He sells paintings on Instagram, licenses tracks, and said he’s finishing up a video album. Meanwhile, he’s issued a spate of solo releases online through Bandcamp as pay-what-you-want downloads, a model that he said entices people to kick down money who’d otherwise download it illegally. As he put it, “I’ve got to kowtow certain concepts of global capitalism — but whatever.”

The first of a mixtape trilogy named for East Bay bus routes, 51 featured a host of local producers, such as Main Attrakionz and Trackademicks. He described it as nostalgic — an opportunity for a guy known by the New York City-via-Wesleyan narrative to show his roots — but Vazquez’s style is too singularly eccentric to neatly fit into a regional heritage.

If anyone, Vazquez is akin to Lil B, but the comparison is often overstated. Sure, both rappers claim to be celebrities in song, but though clever nonetheless, there’s a seemingly arbitrary quality to Lil B’s references, while some critical theorist or another often lurks behind those of Vazquez. Vazquez’s ideas evoke artists such as DJ Shadow and DJ Spooky, who self-consciously likened instrumental, sample-based hip-hop with ideas of assemblage advanced by French theorists such as Gilles Deleuze.

But Vazquez’s citations are more oblique in song. In editorials, such as when Vazquez responded to a New Yorker article with an interrogation of white critics’ assumptions about hip-hop, he gets more didactic. Recently, he published a detailed examination of the causes, symptoms, and potential correctives for institutionalized and internalized racism in the United States on the website Wondering Sound.

His op-eds strike a different tone than his raps — a difference he attributes to their audience. “There are plenty of fools who would never sit down and read that from beginning to end. It’s not the language they’re accustomed to,” he said. “It’s not for people who already know it in their hearts and experience to be true.”

It’s tempting, but unfair, to categorize his editorials as serious and his rapping as silly. His forthcoming book, O.K., A Novel explodes the misleading dichotomy. Its bound format scans as serious, while the writing, which he described as “autobiographical in texture,” uses the strategic cultural bricolage, poached phrases, and satire that make his rapping such a provocative thrill.

It’s all reminiscent of a 1964 Supreme Court case, Berlin vs E.C. Publications, Inc., which determined that Mad magazine’s parody songbook was protected from publishing maven Irving Berlin’s allegations of copyright infringement. Parody is a vital form of cultural criticism, the court decided, a ruling that Vazquez’s joke books and songs affirm. Is Vazquez’s work in the service of jest or seriousness? There’s truth in jest, so, whatever.