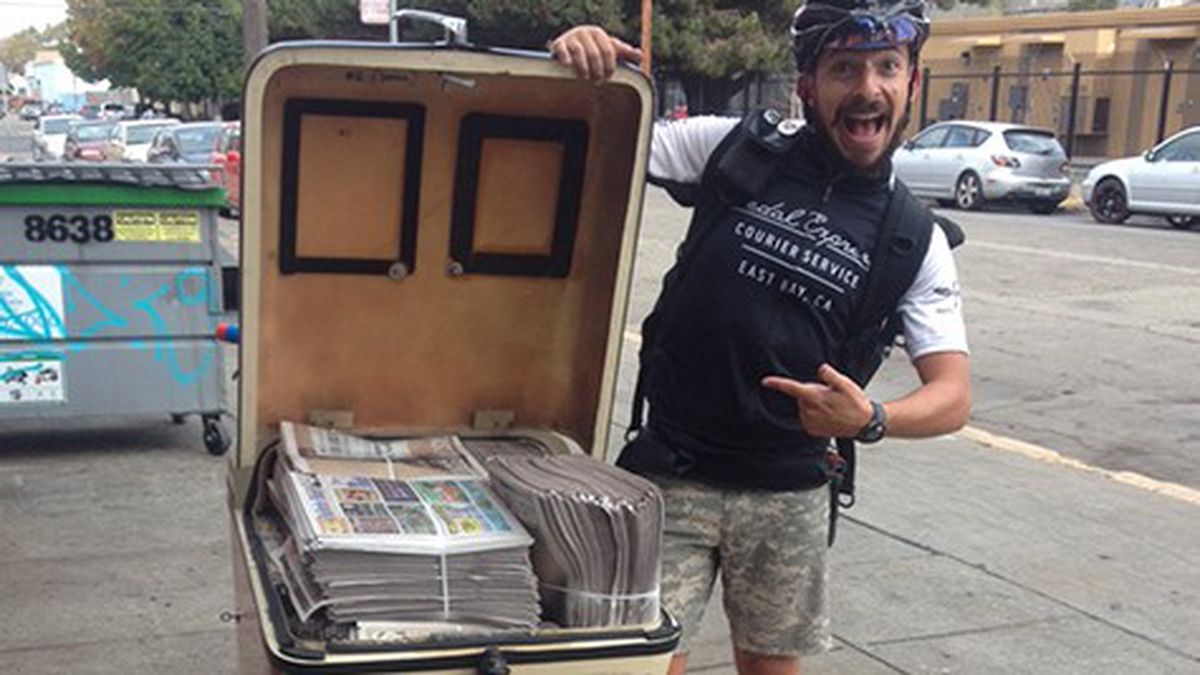 The Return of the Bike Courier

Technology was supposed to have signaled the downfall of the bike messenger, but the opposite has happened, and bike courier culture is going strong.

People in the East Bay who have ever found themselves in dire need of a sex toy no longer need to fret. Since May of this year, Feelmore Adult Gallery in Oakland’s Uptown district has offered same-day local bike delivery for many of its toys and accoutrements.

“Imagine being in the midst of some hot, steamy sex and requiring a bottle of lube,” said Nenna Joiner, owner of the sex-positive store and gallery. “Do you get up and leave your lover, changing the mood? Or make a call and have your needs delivered immediately?”

Feelmore is one of many establishments taking advantage of the recent surge in bike delivery in the Bay Area. “We thought to take it a step further as more and more people from metropolitan areas like New York, Detroit, LA, Baltimore, and New Orleans move into the Bay Area without their cars,” Joiner said. Feelmore already offers a 10 percent discount to customers who travel to the store by bike, and adding bike delivery to its list of services is another way to partner with the community and “pair our service with technology in order to truly be a unique business and continue to stand out,” Joiner said.

Bike messengering was supposed to go the way of the dodo, and publications such as The Economist, Wired, and the Washington Post prophesied that the internet and technology would be the death of couriers. As Wired put it in a 2008 article titled “Internet Endangers Big-City Tradition: The Bike Messenger”: “In a world where documents travel by email and the web, and electronic signatures are legally binding, the business of moving physical wood pulp from point A to point B is struggling.”

Instead of going gentle into that good night, however, bike courier companies have grown and adapted to the changing landscape. “While the number of full-time bike messengers has declined, bike delivery in general has exploded in the past few years,” said Jon Trembley, executive director of the San Francisco Bike Messenger Association. “I cannot even guess how many people are out on bikes delivering food, coffee, iPads, and ice cream. It seems like every week, some new startup wants to deliver you something by bike.”

It turns out that technology (along with our culture of instant gratification) is actually helping bike courier businesses. Some of the biggest tech companies, such as eBay, Amazon, and Google, are pushing their same-day delivery services, and many employ couriers to get the job done. “Fax machines, the internet, and emails were all supposed to kill the messenger industry,” said Trembley. “Not only are we still here, we are embracing those technologies and using them to our advantage. While there is still a need for traditional messenger services, it’s the emergence of personal delivery services that have really put people back to work on the bike.”

Feelmore partners with Pedal Express, a worker-owned bicycle courier service that delivers to Oakland, Emeryville, and Berkeley. Pedal Express recently celebrated its twentieth anniversary, and according to one of its owners, Dominic Lucchesi, “bike messengering never went away. It’s mostly that the packages have changed.” Lucchesi noted that delivery for documents, which can now be delivered digitally, is less in demand, but that, in general, “business hasn’t changed.” In the past, Pedal Express delivery items have included architectural drawings, sandwiches, small mammals, groceries, cakes, and even the Express. About a month ago, the Express partnered with Pedal Express to deliver our papers throughout downtown Oakland.

Feelmore also uses the mobile commerce app Postmates for deliveries that fall outside of Pedal Express’ business hours. Postmates, which was founded in San Francisco in 2012, is available on iOS and Android, and offers delivery of almost any product in about an hour. Postmates has been described as “Uber for bikes,” because it connects customers with local couriers who then deliver goods from most restaurants and stores in the East Bay.

“The internet made our lives easier, but at the end of the day, people still need to eat and they still have physical goods that need to be moved,” said April Conyers, Postmates’ director of communications. “Postmates is changing the way local goods move around a city, and bikes enable that process,” she said.

Bicycle Coffee, an Oakland-based coffee roaster and delivery service, is another example of a thriving two-wheeled business model. Cameron McKee, who runs the company along with his brother and cousin, said, “We’re happy with how far we’ve come and we’re very excited for the future. Beyond the Bay Area, we have set-up Bicycle Coffee chapters in Tokyo and LA. This model works and we’re excited to establish more chapters in the future.”

McKee also said he thinks the Bay Area was especially suited to deliveries by bike. “The community supports what we’re doing. While making deliveries, we get to ride through the streets and say hi to everyone. We give stickers to little kids. People dig it.”