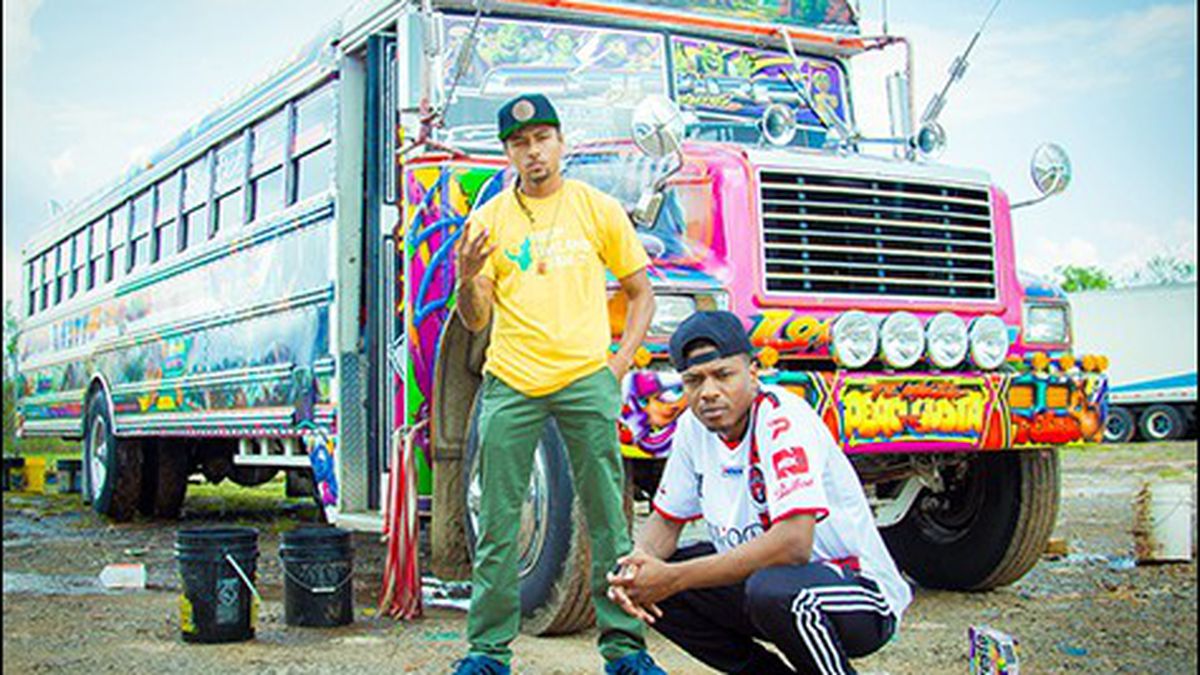 Oakland bilingual rappers Los Rakas signed to a major label for the release of their new double album. But can they maintain their revolutionary roots?

The young female fans at Los Rakas’ seventh anniversary show at The New Parish in November were trying to get closer to the stage. They pulled down their shirts to show off their cleavage, in hopes of getting noticed by one of Los Rakas’ two members — Raka Rich, who has frizzy curls and mocha-colored skin, and Raka Dun, whose masculine face is defined by strong cheekbones.

For the past seven years, the bilingual rap duo — whose distinctive style combines Dun’s strong flow with Rich’s undeniable charisma — has been building a steady following in Oakland, and beyond. Rich and Dun (who are cousins, originally from Panama City) have toured the country, performing in places such as Albuquerque and Philadelphia, as well as in Chile and in Mexico. On the night of their anniversary show, they seemed like royalty to the audience, which included teenage girls and DJs such as Chuy Gomez. The air was thick with marijuana smoke.

And now, Los Rakas appear ready to make it big. The duo signed with Universal Music Latin Entertainment, a subsidiary of Universal Music Group, for the release of its new double album, El Negrito Dun Dun & Ricardo, which comes out on April 15.

The album is divided into two sections, with each member getting his own eight tracks or so: Dun’s tracks are political, a dancehall call to arms, while Rich’s are intended for the club, and concern parties and women. The album is a huge departure from Los Rakas’ past efforts, especially their 2011 EP Chancletas y Camisetas Bordadas. “We were just playing around when we recorded that,” said Dun. Perhaps, but the result was excellent: gritty and hyphy at its core, with party-ready refrains like uno, dos, tres, cuatro/todo el mundo esta borracho! (Translation: One, two, three, four/everyone get drunk!)

In contrast, El Negrito Dun Dun & Ricardo is not playful. It’s a professional effort with a production team and an extensive publicity campaign. The band hopes that the album, and the deal with Universal, will help spread its raka movement, which Rich and Dun said is transnational, stretching down the West Coast to Chile. The term raka is taken from the Panamanian word rakataka, a derogatory term referring to someone from the ghetto. Dun and Rich have used it to christen their movement, which, according to their loose mission statement, is about empowering “villages with semi-naked women where children run barefoot … communities where there is no sun, where funerals call us.”

Dun thinks the raka movement is particularly needed in conservative Panama, where social norms dictate that a dark-skinned boy like him should find a nice white girl to marry in hopes of improving the race. “We were robbed of our history,” said Dun in Spanish. “It’s weird, you feel me? Because everyone’s mixed with everyone else.” He said that racism there is insidiously bound up in class, so all the telenovela stars, politicians, and yeye (upper-class) folks are white, or at least light-skinned.

But El Negrito Dun Dun & Ricardo is not exclusively about social justice. It doesn’t incite one to revolution. In a word, the album is uneven, right down to the duo’s use of Spanglish: Estos manes saben not to fuck with us, man! sings Dun with uncharacteristic choppiness over a dancehall beat on “No Tan Listo.”

The format of the double album also does the band a disservice. Dun is an expert rapper, but he needs Rich’s sense of melody to pull off a truly great cut, while Rich often delves too far into pop-electronica, with largely forgettable results. When he sings about a girl from Malibu, instructing the listener in Spanish to get back to the Eighties, it feels tired, like a push too far toward the hipster mainstream. However, there are some tracks that stand out, such as “Sueño Americano,” which is about Dun’s life as an undocumented immigrant during his early years in Oakland. It’s a highly nuanced description of the compromises immigrants are often forced to make for economic reasons, and it’s one of the band’s most emotionally honest efforts. In Panama, if you don’t have something, just ask and you’ll get it, Dun raps, here if you don’t have something, well then you gotta sin.

One wonders how far Los Rakas can get in the world of mainstream hip-hop, given that they rap in Spanish and that their medium is largely rooted in hyphy and Caribbean styles like plena and dancehall. After all, fans in the mainstream do not have the same taste as those in Oakland, where multiethnic audiences favor tracks with driving bass.

But Los Rakas’ publicist, Natalia Linares, said that the rest of the country is beginning to look a lot like Oakland. “Everyone knows the numbers are coming, right?” she said, referring to the fact that people of color are expected to make up the majority of the US population in the next thirty years, and many of them will be Latinos who grew up in diverse urban areas like Oakland, where rap and hip-hop are popular.

“The mainstream isn’t servicing this generation,” Linares continued. She thinks Los Rakas are riding the coming zeitgeist — that their music, which is neither strictly hip-hop nor Spanish radio-friendly, is actually the sound of the future.

Back at Los Rakas’ New Parish show, the teenage girls were going crazy. Los Rakas were on stage in front of a huge banner imprinted with their logo, and every so often one of them pulled out a huge flag with their name on it to rev up the crowd. But despite the enthusiasm from the younger audience members, the atmosphere felt more like a marketing event than a revolution. “It’s like they’re wearing their band’s shirt to their own show,” said a girl in the audience.

It was almost midnight, and Los Rakas had just started their set. When asked if the group has changed in some fundamental way, one fan responded, “I don’t know yet — get back to me,” with more than a little fatigue.

Los Rakas, in their growing popularity, are certainly a sign of things to come for pop music. But whether they themselves will lead this revolution remains an open question.

Fracking During a Drought Is Crazy