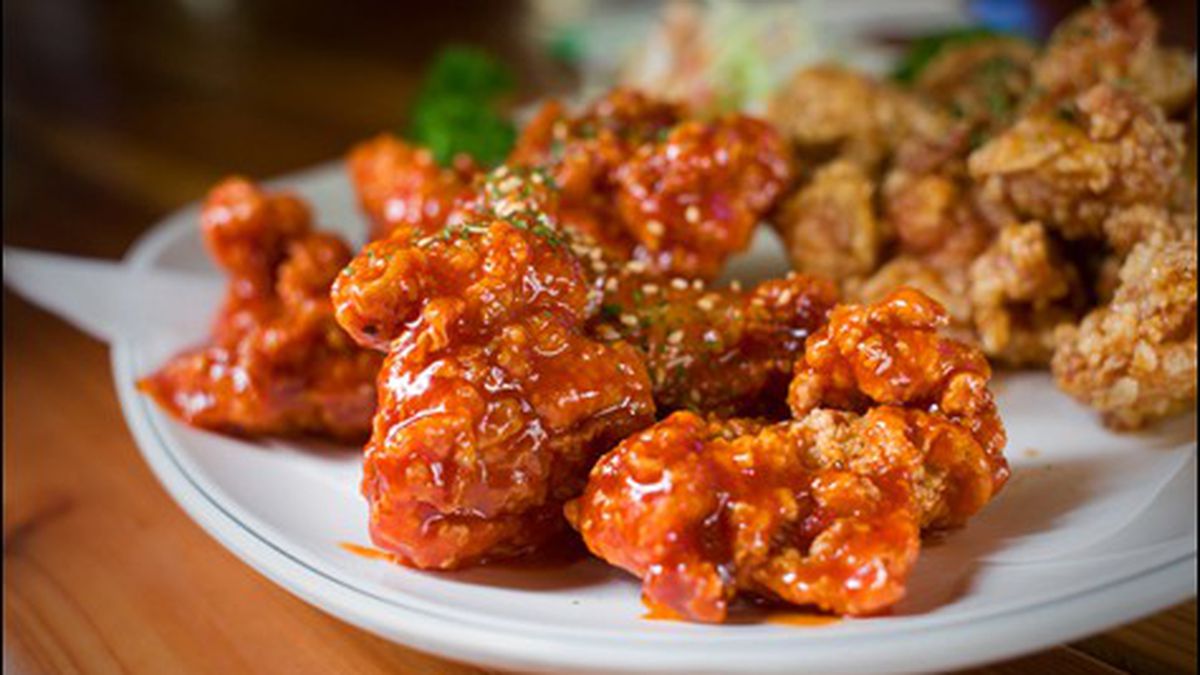 You’ve probably heard of the izakaya, the kind of Japanese pub that by now seems no more exotic than a tapas bar in the savvy food lover’s imagination, especially here in the Bay Area. Lesser known is the izakaya‘s rowdy Korean cousin, the soju bang.

While izakayas have traditionally been the province of the salaryman, soju bangs (literally, “soju rooms”) around these parts skew younger, catering almost exclusively to Korean-American twenty- and thirtysomethings: Think bubblegum-sweet K-pop and fruity soju-based cocktails (a version made with the Asian yogurt drink Yakult goes down extra easy). And unlike at an izakaya, where the food often aspires to elegance, soju bang fare is as down-home as it gets — fried chicken, grilled meats, and assorted street snacks.

There are fine examples of the soju bang here in the East Bay, up and down the long stretch of Telegraph Avenue that comprises Oakland’s diffuse “Kimchi Row,” yet by and large these establishments fly under the radar, hidden away on unlikely street corners. But if you’ve got the stamina for it — and a trustworthy designated driver — you can hit up several in a single night (they’re all open till 2 a.m.).

An Oakland soju bang crawl might start at the unfortunately named Oriental BBQ Chicken Town (OB Town for short), where picnic tables, paper lanterns, and an indoor “roof” create a tiki-bar effect. No surprise, chicken is the star — thirteen different versions, ranging from “extremely spicy grilled chicken” to several different takes on the über-crisp double-fried chicken that Koreans are famous for. For maximal crunch, order the standard batter-fried chicken; for a saucier experience, go for the soy-and-garlic marinated Gan Jang, whose only flaw is that it’s sometimes overcooked.

Other crowd-pleasers include the garlic fries (frozen steak fries, but loaded with fresh garlic) and the ramen dduk bok ki, a street dish that consists of toothsome rice cake sticks, instant ramen, tofu triangles, and a hard-boiled egg — all of it swimming in a bright-red sweet-and-spicy sauce. Wash it all down with a cold OB or Hite beer, both available in comically oversized plastic bottles.

Next, head over to Kang Tong Degi — if you can find it. The only signage is yellow Korean characters superimposed on big metal barrels, and the building’s dingy exterior belies the fact that there’s a restaurant inside. (Look for the Chinese restaurant called Big Daddy’s next door.)

Even more than Oakland’s other soju bangs, the place has the feel of a secret club. From the private booths (perfect for handsy young couples and backroom business deals) to the spare decor (papered-up walls covered with Korean and Chinese characters), there’s no other way to put it: The place is freaking cool.

Kang Tong Degi is also the one soju bang where humble dishes rise to the level of — and sometimes even surpass — the city’s better Korean restaurants: Sautéed chicken gizzards were grilled to chewy-crunchy perfection and served with sliced garlic, jalapeños, and lightly charred lettuce. We picked up a little of everything with our chopsticks and dipped it in a thick slurry of sesame oil, coarse salt, and black pepper — an addictive combo.

Then there was something called “cheese corn,” a soju bang standard: corn kernels (almost certainly out of a can) cooked in mayonnaise and sweet condensed milk — a weird but delicious thing, halfway between a stoner’s snack and a dessert. (Avoid OB Town’s savory version, made with actual cheese that congeals, unappealingly, as it cools.)

But the pièce de résistance is the spicy ham-and-noodle stew, which Koreans know as budae jjigae or “army stew”: a pot of soup filled with every imaginable thing: tofu, kimchi, rice cakes, instant ramen, Spam, hot dogs — I loved it for its ballsy, seamless blend of wholesome and not-so-wholesome ingredients. What sets Kang Tong Degi’s version apart is its deeply savory gochujang (red pepper paste)-spiked broth. Nothing’s more comforting on a cold night.

The weirdest thing on the menu is chrysalis soup: a spicy broth chock-full of maybe a hundred peanut-size silkworm pupae. I’d read Chowhound accounts that described the dish as resembling “cigarette butts in a watery ash tray” — an experience akin to eating a “very musty sleeping bag.” But hey, our waitress said she liked it, so my dining companion and I figured, why not?

I won’t lie: This was one of funkiest things I’ve ever eaten. The little buggers (they really do look like bugs) had the grainy, slightly crunchy texture of dried shrimp and a swampy aftertaste that permeated the whole bowl.