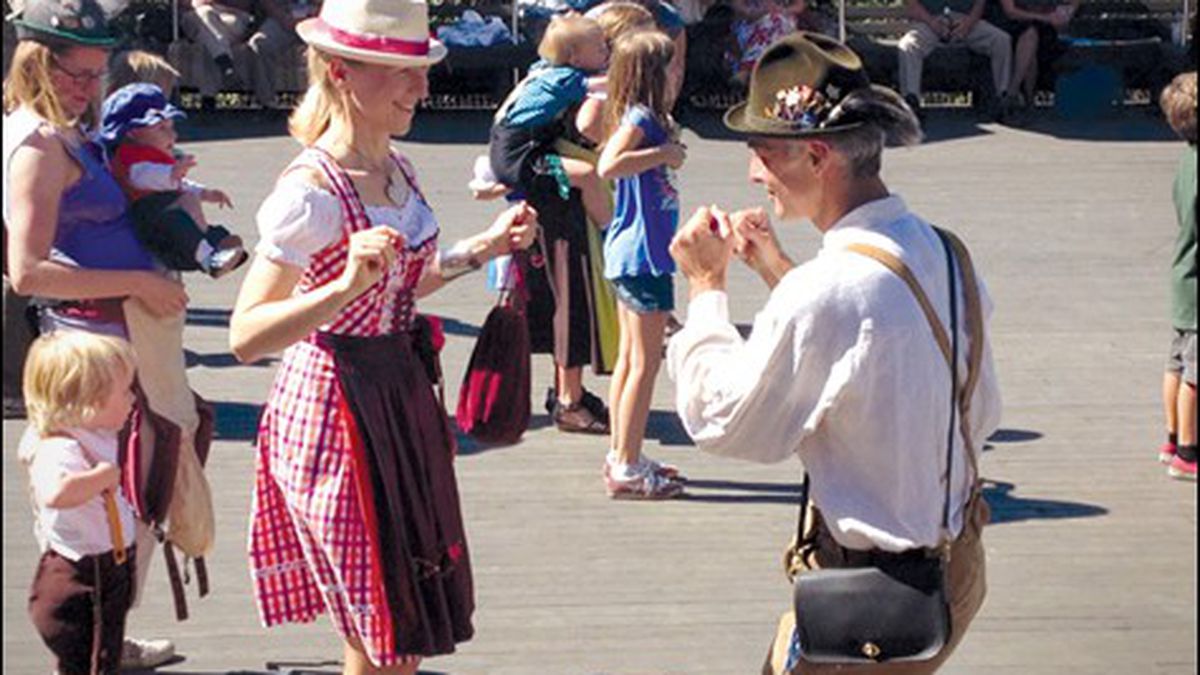 The Mountain Is Free

The Germanness of Oakland Nature Friends cannot be overstated.

There are an awful lot of misconceptions about lederhosen floating around these days, and they really ought to be cleared up — this, according to a man named Peter, whose lederhosen, it should be noted, are indeed quite nice. Peter is very emphatic once you get him going on the subject, and also, it turns out, spectacularly wasted, which is good for the emphaticness. First: The word itself is pronounced all wrong most of the time — it should be with a long a and a soft r, like lay-duh-hos-en and not like lie-der-hos-en or lead-er-hos-en. Second: They’re actually quite comfortable, despite all those straps and flaps and buttons you’ll see on the fancier pairs. Third: While leather is traditional, they can also be made from cotton or twill or pretty much anything else. Which is nice when your traditional German Oktoberfest happens to fall on a seventy-plus degree Oakland day.

There are certain moments that feel not quite real, and listening to a drunken 82-year-old explain his pants to you is one of them. It’s the kind of thing that happens a lot at Nature Friends, because the place itself feels not quite real, or at least not quite like it should exist in this place or this century. You really need to see to understand, but as a start, Nature Friends is part of a 1,800-city organization, founded by German and Austrian expats all over the world, and intended to, essentially, give blue-collar workers access to the wilderness. Their motto is “berg frei” — the mountain is free; The Oakland version was founded one hundred years ago way up high in the hills near Joaquin Miller Park. Peter has been a member all his life. It’s an unquestionably lovely little plot of land: Lots of trees, an extremely Alpinic-looking lodge, a raft of forest-green picnic tables, and a wooden deck built into the hill and overlooking the city. And the Germanness cannot be overstated: This place is to the kind of hiply/vaguely Bavarian “beer hall” you’d find closer to the city as, I don’t know, the ACTUAL WILD WEST is to a saloon-style bar, or really, as any real thing is to its themed counterpart — uncooler, maybe, and harder to understand sometimes, but also completely charmingly the best ever.

The signs at Nature Friends are all in German, to the extent that you might have to wait until someone more knowledgeable than you enters or exits a bathroom to figure out which to go into; the closest ATM, the Oktoberfest invitation warns, is two miles away. The food comes gloppy and porky and copious on a paper plate buckling with its own weight, not a cutesy garnish or a vegan option in sight, and there’s exactly one beer on tap, and it’s not particularly fancy: Spaten lager, which the volunteer barkeep explains is like the Budweiser of Germany, though, “you know, still a lot better than Budweiser.” There are lots of children and lots of older people and hardly any hipsters. Music is provided by a traditional German band doing mostly polkas and waltzes, though they did allow for a rendition of the venerable chicken dance — suffice it to say you haven’t had your heart broken into a million joyous pieces until you’ve seen ten to twelve men in lederhosen do the chicken dance with their grandchildren — as well as exactly one contemporary German hit.

And then it was time for a toast — it is almost always time for a toast at Oktoberfest, it seems — and all the Nature Friends got up, kids and grown-ups and plastic cups full of beer and the whole big forest laid out so far ahead you could kind of forget civilization even exists, and singsonged, in words an impressive number of them seemed to understand: “Eins, zwei, drei, g’suffa/Zicke-Zacke-Zicke-Zacke/Hoy, Hoy, Hoy!” That’s Peter’s favorite part. &#8;