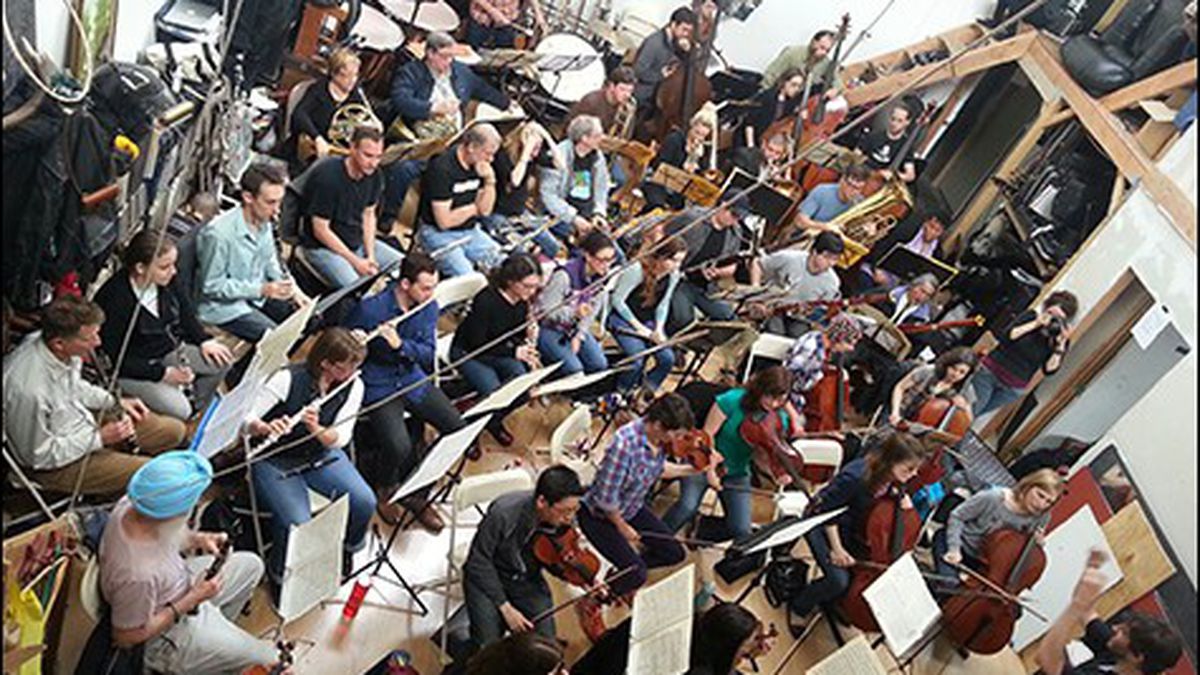 On a recent Saturday afternoon, a group of about 65 musicians had just finished playing an original orchestral arrangement of Björk’s “New World.” After the final chord reverberated throughout the rehearsal space, a hush fell over the musicians and the several dozen audience members in attendance.

Finally, conductor David Möschler broke the silence. “All music has only one test,” he said softly. “Do you want to hear it again? That’s the only test. … Do you just want to listen to that again? And I hope you agree with me — I want to hear that again.”

Immediately, the musicians and audience members packed inside San Francisco’s American Conservatory Theater Costume Shop erupted into loud applause and hollers. Then the orchestra quieted and once again played the eerie, anthemic song, which was originally featured in the 2000 Lars von Trier film Dancer in the Dark.

Such raucous enthusiasm encapsulates one of the reasons why Awesöme Orchestra is so popular. The Bay Area collective, which will celebrate its one-year anniversary next month, is grounded in the belief that the orchestra should be relaxed, fun, and accessible. No auditions are required and anyone is welcome to join the “reading sessions,” as long as they can “proficiently handle the part,” as the group’s website states. The casual setup seems to work: The quality of musicianship is high, and arrangements usually sound polished within the space of a short rehearsal. But while the craft is serious, the environment is not.

“We are an adventure-seeking orchestra,” said Möschler, the collective’s founder. “We want to make orchestral music more accessible to the community, whether it’s where we play, what we play … or how we play it.”

The key ingredient, Möschler continued, is a generous supply of free beer. “It sets the tone,” said the 31-year-old Berkeley resident. “We are relaxed here. Yes, we care about high musicianship, but we care about you more.” In many ways, Möschler wants the orchestra to feel more like a band. “It’s democratic,” he added. “You’re usually drinking beer. You’re playing music you like.”

The concept seems to be resonating among musicians. Since its inception, the orchestra has attracted about five hundred players, ranging in age from 15 to 85 and traveling from as far away as Sacramento, said Möschler. The constantly changing group meets on average twice a month in unconventional spaces throughout the Bay Area. They’re always open to the public — “non-playing guests,” or “muggles,” as Möschler calls them.

Musicians are encouraged to RSVP for the sessions ahead of time, and are given the arrangements to practice. Each session typically involves playing two to three pieces, usually a mix of classical and contemporary arrangements. In the last year, the group’s repertoire has included the Simpsons theme song, selections from Star Wars: Return of the Jedi, and a medley of Daft Punk tracks. That’s in addition to standards by Tchaikovsky, Beethoven, and Mozart, although they’re often interpreted through an experimental lens. Awesöme Orchestra also plays concerts and plans to do more of them in the coming months. (Musicians who play ticketed performances and professional recordings are paid, Möschler said.)

The concept of Awesöme Orchestra was born in March of 2012, when Möschler was hiking with a friend in Tilden Park. His friend’s father, a retired neurosurgeon, had just received a serious medical diagnosis, and doctors didn’t know how much longer he had to live. She mentioned to Möschler that her dad had studied music before he became a doctor and had always dreamed of conducting the overture to Mozart’s “Marriage of Figaro.”

“Immediately, I said, ‘I have the music to do that, and I know about a hundred players,'” Möschler recalled. “It’s the least we could do and it’d be so fun.” He got about thirty musicians to commit to the idea, and several weeks later, they surprised his friend’s father at the Ashby Stage in Berkeley. It turned into an emotional retirement party.

The musicians loved it, too, said Möschler, who also works as a freelance music conductor for several Bay Area theater companies. “Most of them had some sort of background in orchestral music, but they don’t always get to play in orchestras,” he said.

So with help from several of Möschler’s musician friends, Awesöme Orchestra was born in March of 2013, and met for the first time at a warehouse studio space in West Oakland. The name came from an enthusiastic email Möschler wrote with “awesome orchestra” in the subject line, which a friend interpreted to be the group’s name. It stuck.

Since then, Awesöme Orchestra has held sixteen reading sessions, and has become a member of the Intersection Incubator, a program of Intersection for the Arts. The San Francisco-based organization acts as a fiscal sponsor, meaning it extends its nonprofit status to Awesöme Orchestra so that donations to the group are tax-deductible. Möschler has brought on several paid interns to help with the group’s day-to-day efforts, and last week hired a part-time director of development and communications as well as a part-time operations manager. His own efforts have been on an entirely volunteer basis. Moving forward, he hopes to ramp up fundraising — mainly through grants and individual contributions — to help cover the basic costs of running the orchestra’s open sessions.

Even while relying primarily on word of mouth and social media, Awesöme Orchestra has generated a lot of interest, Möschler said, noting that the group follows in the footsteps of experimental orchestras such as Classical Revolution, Magik*Magik Orchestra, and Jazz Mafia. “In orchestral music … a lot of people play music by dead white guys. And most orchestras are made up of white guys,” Möschler said. The group aims to break down some of the many barriers and discriminatory practices that still exist in orchestras today, Möschler said. That means hosting sessions in accessible locations, featuring diverse composers and arrangers, and welcoming anyone who is interested in participating.

The informal atmosphere makes a difference, said Allison Gomer, who plays trombone in Awesöme Orchestra. “The laidback-ness of the group is something that might contribute to the high level of performance,” she said. “No one is stressing out.”

For Anna Ishida, who sang Björk’s “New World” at the Saturday session, the experience has been unlike anything she’s done before. “It was such an informal and wonderful opportunity to sing a song just for the love of doing it,” she said. “That was kind of the best day of my life.”