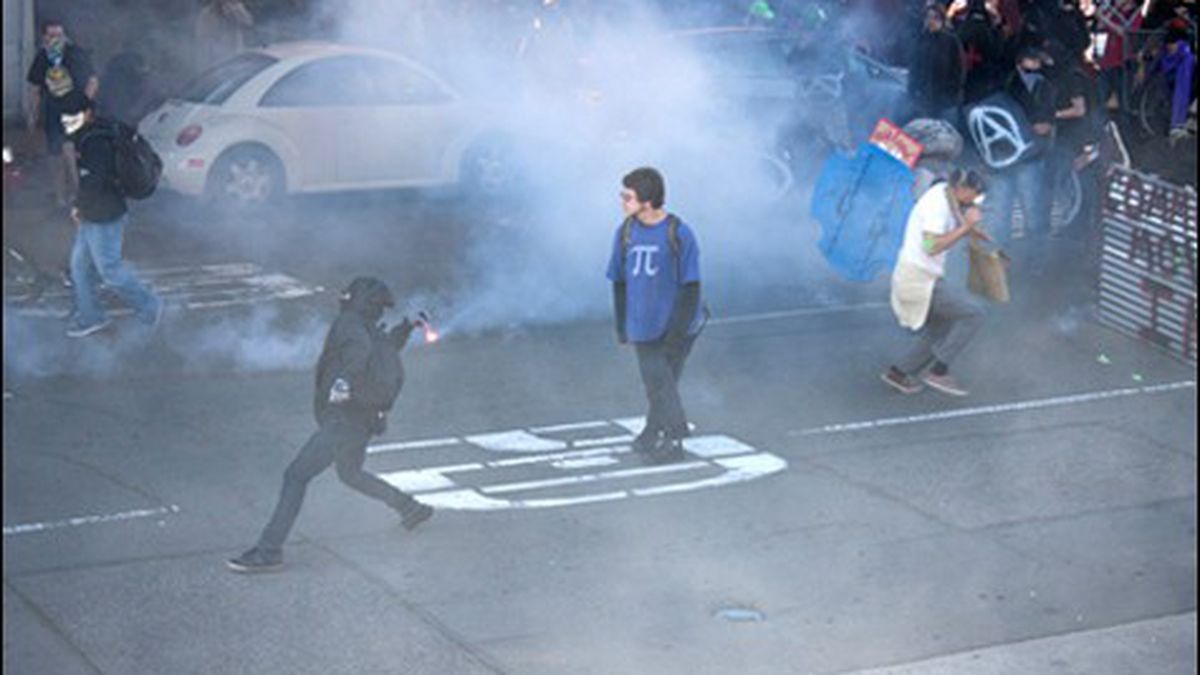 The Oakland City Council Was Right to Reject Occupy Crackdown

Even police brass and port officials opposed the idea.

Although support for Occupy Oakland has nosedived recently in the wake of violent protests, the Oakland City Council made a smart decision last week, rejecting a call for more police crackdowns on Occupy demonstrations. The measure likely would have resulted in additional violent confrontations between Oakland police and so-called Black Bloc protesters — which is exactly what the violent fringe of Occupy appears to covet.

It’s become increasingly obvious over the past month that a hard-core group within Occupy Oakland relishes violent confrontations with cops. These masked protesters show up at demonstrations armed for violence, equipped with shields and packs full of objects that they can hurl at police. However, they usually don’t unleash their fury until police act first — either by firing teargas canisters or other less-than-lethal weaponry at demonstrators. It’s almost as if the Black Bloc protesters realize that if they were the first to attack, then they would be viewed within Occupy as the aggressors, a development that might prompt nonviolent demonstrators to finally shun them.

Instead, the Black Bloc protesters appear to prefer to make provocative acts toward police designed to trigger crackdowns, so that they then can claim that police are the true violent ones. But when police hold their fire, remain calm, and allow protesters to march, demonstrations often turn out to be peaceful, like the ones that took place the last two Saturdays. Indeed, during the February 4 Fuck the Police March, Oakland Police Chief Howard Jordan and his new command staff showed indications that they’re beginning to understand this dynamic.

But the crackdown proposal, sponsored by Councilmembers Ignacio De La Fuente and Libby Schaaf, would have forced Jordan’s hand. It would have put significant pressure on police to use force against Occupy, and thus would have played directly into the hands of the Black Bloc. Jordan seemed to understand this, and Council President Larry Reid, the strongest backer of police on the council, did as well when he refused to vote for the crackdown proposal.

Along with De La Fuente and Schaaf, Councilwomen Desley Brooks and Jane Brunner voted in favor of the crackdown measure, while Councilwoman Pat Kernighan, who is generally viewed as being pro-police and is chair of the council’s public safety committee, abstained with Reid. Rebecca Kaplan and Nancy Nadel, the two most progressive council members, voted against the crackdown plan.

Last weekend the San Francisco Chronicle reported that the De La Fuente-Schaaf measure failed to garner the five votes needed, in part because Oakland police brass had quietly opposed it. Police officials were reportedly worried that more Occupy crackdowns could push the department into federal receivership. Port officials also reportedly opposed the crackdown plan because they were concerned it would prompt more violent protests at the port.

In short, it seems increasingly clear that police are starting to realize that if they maintain their poise during Occupy protests, hold their ground, and refrain from striking first against demonstrators, then the Black Bloc might lose steam. Even the anarchist group Anonymous posted a video last week strongly criticizing the Black Bloc in Oakland. Indeed, the Black Bloc acts at times as if its whole reason for being is to battle police and turn downtown Oakland into a war zone. But if police — and the city — refuse to play this ugly game, both Oakland and Occupy may emerge from this struggle peacefully.

Another Tax on the 99 Percent

Last week, we told you about Governor Jerry Brown’s semi-regressive tax plan, and how aspects of it will hurt low- and middle-income earners through a sales tax hike, but there’s another proposal vying for the November ballot that may be almost as bad. This measure is being pushed and financed by Los Angeles lawyer Molly Munger, and it would raise income taxes across the board, including for Californians who make as little as $14,642 a year.

Munger, like Brown, appears to be hoping that voters will approve her plan because the $10 billion in annual revenues it will produce will go directly to public education. Brown has said that if voters don’t approve his plan, he’ll have to cut education funding dramatically.

But it remains to be seen whether voters will endorse Munger’s proposal once they learn that it will raise their taxes, and is not just a tax on the rich. According to Munger’s website, her proposal would progressively raise taxes on incomes above $14,262 a year with tax hikes rising from .4 percent on low-income earners to 2.2 percent on incomes above $3.4 million.

Although Munger’s proposal, like Brown’s, taxes wealthier Californians at higher rates than it does low- and middle-income earners, both proposals fail to adequately address California’s unfair tax policies. As the Express reported last week, a 2009 analysis by the nonpartisan Institute on Taxation and Economic Policy showed that the effective tax rate for the lowest 20 percent of wage earners in California, when counting all taxes, including sales taxes, is higher — 10.2 percent — than it is for middle-income residents (8.1 to 8.7 percent) and the One Percent (7.4 percent). While Munger and Brown’s proposals would help close that gap, both plans would still leave low-income workers paying a higher effective tax rate in California than the rich.

There’s only one tax proposal vying for the November ballot that targets the One Percent and leaves the 99 Percent alone: It’s known as the Millionaire’s Tax, and it’s being sponsored by the California Federation of Teachers and the California Nurses’ Association. It’s the only true tax-the-rich plan out there right now; it would raise taxes on incomes above $1 million, but would leave everyone else’s tax rates intact. As a result, the Millionaire’s Tax would do far more than Munger and Brown’s proposals to address California’s rob-the-poor-and-give-to-the-rich tax policies.

The Millionaire’s Tax appears to be gaining momentum statewide. Last Friday, progressive activist and former Obama administration official Van Jones told the state Democratic Party convention that he believes that the Millionaire’s Tax will excite younger voters and get them to the polls, the Sacramento Bee reported. “The idea that the people who have already climbed that ladder have to give back to them, that’s the pathway forward I think to electrify that generation,” Jones said.

Richmond’s Chris Magnus, who is perhaps the most progressive police chief in the Bay Area, took the stand in a civil trial last week and denied that he was a racist who discriminated against black police officers. … Kathy Neal, a former Oakland port commissioner, pulled out the 18th Assembly District contest in a surprise move. Neal was one of four major candidates in the race, along with Alameda Vice Mayor Rob Bonta, Peralta Community Colleges Trustee Abel Guillen, and AC Transit board member Joel Young. … And Tim Rood, a critic of the large sports field planned for Blair Park in Piedmont, lost his bid for the Piedmont City Council by just 26 votes. Rood’s defeat may be an indication that the sports park controversy has died down.