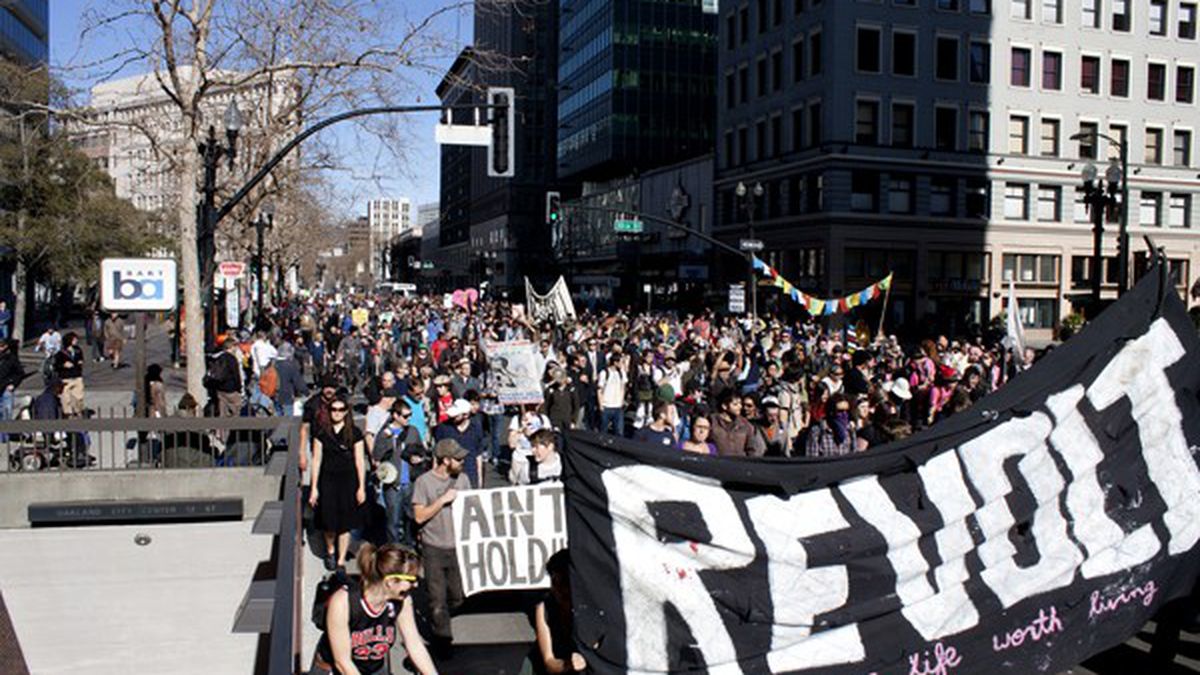 Real Change is Complicated and Messy

Throughout the country, those concerned with social justice have been furiously debating Occupy Oakland. The last few weeks seemed to be bad ones for the occupiers. The tactics of the Black Bloc were critiqued in our paper and by respected national commentators on the left like Chris Hedges, and vandalism at City Hall was roundly criticized by city officials and local liberals.

But it is a serious error for local progressives to use mistakes in tactics or the lack of a “sensible” program to trash Occupy Oakland. Neither recent events nor the criticism of them changes the nature of the bubbling cauldron that feeds the Occupy movement and which is fed by the Occupy movement. Occupy remains the most important political event in our country; and Oakland and New York are its centers.

Like activists of the 1960s and 1970s, occupiers are metaphorically throwing down the gauntlet to other progressive activists, especially former activists who are now in government. Much of the sound and fury we hear from liberal naysayers comes from the inner voice of their psychological realization that they have little to offer to the problems that Occupy is highlighting. Can one honestly say that pre-Occupy progressives had outlined an effective avenue for social change for the youth, poor, and minorities in our community? If you have one, please let Oscar Grant’s family know about it.

The militant movements of the Sixties and Seventies were fed by the anger over racial discrimination, the military draft, and economic injustice, but personal concerns are always a part of political movements. Youth today are less likely to have a job than at any time since World War II, and minority youth suffer from police brutality in the East Bay. Advocates for social justice faced similar questions in the much more turbulent 1960s. They reacted strongly and decisively. In March 1968, a few weeks before his murder, Martin Luther King Jr. spoke about those in the “Other America” who were more militant than the establishment wished. His words need to be heard today:

“It is not enough for me to stand before you tonight and condemn riots. It would be morally irresponsible for me to do that without, at the same time, condemning the contingent, intolerable conditions that exist in our society. These conditions are the things that cause individuals to feel that they have no other alternative than to engage in violent rebellions to get attention. And I must say tonight that a riot is the language of the unheard.”

Some in the audience that day called him a traitor. Today, he is called a hero.

But strong activity for social justice makes many liberals and progressives nervous today just as it did in the earlier eras of protest. Oakland City Councilman Ignacio De La Fuente, who earns a nice salary as a union leader, has pushed hard for a resolution calling on Oakland authorities to stop any Occupy picketing of the port. What is really going on when a top union official is calling for a police crackdown on picketing against economic inequality? Bizarrely, De La Fuente’s resolution even borrows from the phrase “by any means necessary” used by Malcolm X and others, though De La Fuente inserts the word “legal” into it.

And some in the city decry the cost of the city’s response to the occupiers — a pittance when compared to the costs of poor policing or stupid financial deals that Oakland made with Wall Street. Egging them on, the Chronicle is impersonating the Drudge Report. My favorite recent Tea Party-like headline of theirs was “Occupy Oakland’s Costs to Residents Spells Disaster.” Disaster, huh?

George Monbiot, a columnist for the Guardian newspaper, which has surprisingly done some of the best reporting on Oakland Occupy, wrote of timid American progressives who have little to offer and are not even standing up to the Rovian machinations of the far right. “Tied up in reticence and self-doubt, they will not shout stop. Doing so requires an act of interruption, of presumption, for which they no longer possess a vocabulary.” The occupiers have found such a vocabulary.

Another reason for the Sturm und Drang is that Occupy is opening up discussion on questions that have been unseen since the 1960s and 1970s. For example, in that earlier period, activists debated whether workers, who labor yet receive little of the profit from their labor, can make change. One of the most famous political films of that period discussed this issue in the context of a strike at the Richmond oil facilities. Often the heated discussions between activists turned physical, as conservative union officials and workers fought with leftist activists and workers. While this violence was extremely painful for those involved, physically and emotionally, its existence was a symptom of robust debate over real issues. And last month we saw one of the first repetitions of this kind of activity, as union officials in Seattle apparently tussled with workers and occupiers, including some from Oakland, at a meeting there to discuss the port shutdowns.

Intra-movement fisticuffs are a bad thing. But their appearance here is an indication that discussions are deepening between unions as institutions and the non-institutional activity of activists in a way that has not been seen for many years.

Violence of all kinds sucks, and observers are rightly concerned about violence and Occupy. Why haven’t the cops who hurt Scott Olsen been prosecuted? But the violence issue is not a simple one. It’s likely that law enforcement agencies have undercover people in Occupy and some may even be operating in the Black Bloc, pushing for violence. This was a serious problem with the Black Panthers, especially toward the end of their most active period. Numerous police agents infiltrated the organization and promoted harmful actions. Occupy will need to successfully confront this possibility.

Today, like in previous movements, Occupy activists throughout the country are discussing the importance of nonviolence and how to make change. Lisa Fithian, one of the civil disobedience trainers at Occupy Wall Street said: “It’s important for people to understand that these struggles around violence and nonviolence are historic and every movement that’s building its power faces them. … We now have a new generation coming in that has to relearn, or learn on their own, a way to be in relationship to people that are different than themselves.”

Finally, when thinking about Occupy Oakland, let’s remember where we are. The East Bay is a laboratory of radical politics — always has been, and probably always will be. City streets and parks have witnessed the emergence of political movements and been a testing ground for political strategies and tactics. There was the Oakland General Strike of 1946 and the socialist writings of Jack London. It is not so long ago that Mario Savio and Huey Newton walked the streets of the East Bay, flags and draft cards were burned, and confrontations between police and advocates for justice were common. Scorned by many when they were active and excoriated by the press and politicians at the time, the inspiration and legacy of the Black Panther Party and Berkeley student activists fueled the Civil Rights and student movements that helped end the Vietnam War. In doing so, these actions contributed to the greatest progress on eradicating racial injustice that had been seen in the history of the country since the end of slavery.

Change is messy. And please, please — if you’re concerned about the turmoil, propose an alternative that you think will work. But if what you have to offer consists of a vote for President Obama, lobbying the wealthy for a philanthropic donation, or a walk in a Susan B. Komen event, don’t be surprised if the youth in Occupy don’t take you seriously.