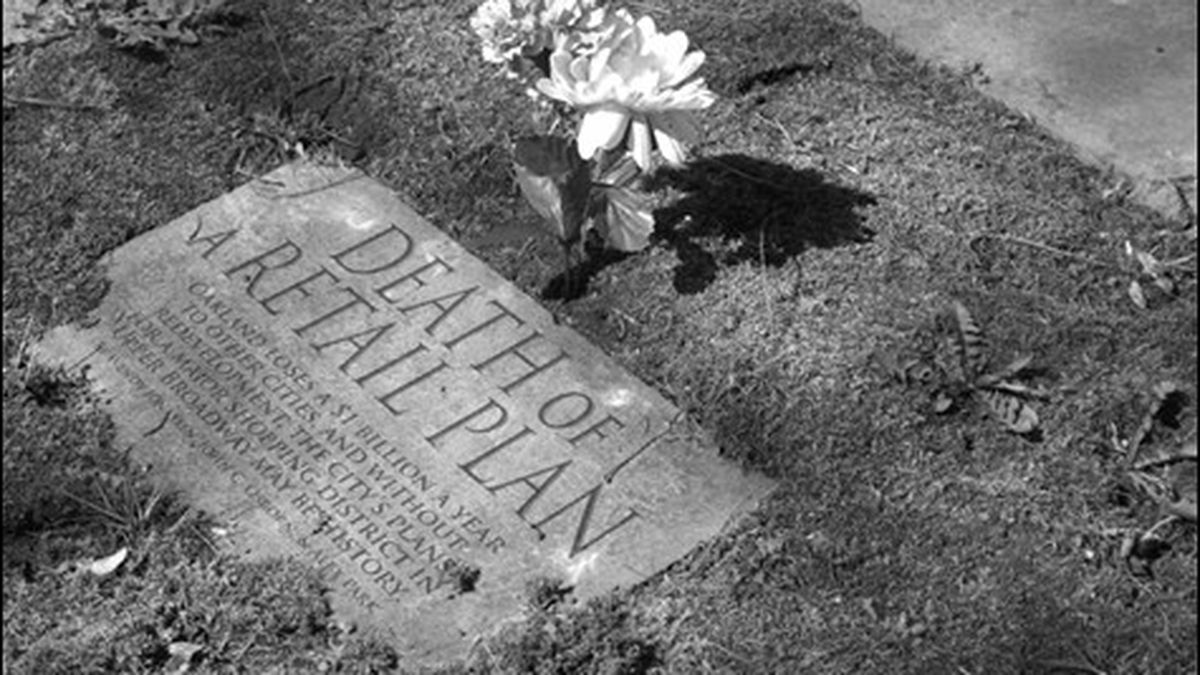 Oakland loses a $1 billion a year to other cities, and without redevelopment, the city's plans for a major shopping district in Upper Broadway may be history.

Glenda Barnhart and her partner Clay Wagers dreamed of opening a bicycle shop. In 2008, as the economic meltdown started to spread nationwide, she feared that she would lose her income as a consultant and noticed that a bike shop was for sale around the Valdez Triangle. She took one look at bike shop and walked out. The area also known as Upper Broadway — failing auto dealerships, vacant storefronts, desolation — reinforced the thought it would be a horrible idea to buy that shop.

Six months later, Barnhart noticed the bike shop was still for sale. But this time she saw signs that the area was springing back to life. The nearby Whole Foods on 27th and Harrison streets had become a vibrant attraction for area shoppers. Condos were popping up close by, new restaurants were opening, and a nascent art community was blooming. It was time, she concluded, to buy that shop — Bay Area Bikes. “If we do this now,” Barnhart recalled thinking, “we will be getting on the ground floor of something big. It was my dream to retire and do what I love.”

Barnhart may not have realized it at the time, but officials from the City of Oakland were already planning a major project for the Valdez Triangle that promised to accelerate the growth it was experiencing. It was going to be the largest retail development in city history, known as Broadway-Valdez. The proposal would have transformed 74 acres of Broadway between Grand and West MacArthur into a bustling retail core, featuring apartments, restaurants, and shops.

The Broadway-Valdez development was going to be Oakland’s answer to Emeryville’s Bay Street, Walnut Creek’s Broadway Plaza, and San Francisco’s Union Square. For decades, the City of Oakland has watched its residents drive or take mass transit to other cities to shop. Oakland, according to The New York Times, may be the fifth best place to visit, mainly as a result of its diverse cuisine and lively night scene, but it ranks as one of the worst “leakers” of retail dollars in the country.

A 2008 city commissioned report on the state of retail in Oakland found that the city loses about $1 billion a year to neighboring cities because of its lack of retail, translating into at least $10 million in lost tax revenues each year for Oakland. “If I am an Oakland resident and I want to shop, I have very few options to do that,” noted Eric Angstadt, deputy director of Planning and Zoning. “So I look outside of Oakland.”

Years in the planning, Broadway-Valdez was designed to help Oakland recapture a substantial portion of that leaked revenue and economic activity. The development proposal also enjoyed overwhelming support from Oakland political leaders; it was championed by many of the 2010 candidates for mayor; and last year, Jean Quan made it a keystone of her economic revitalization plan.

The project excited environmentalists, too, because it was to be a smart-growth, sustainable development built along a major transit corridor. It also was designed to complete a vision for Broadway as a “grand boulevard” that seamlessly connected North Oakland to Jack London Square, offering shoppers a variety of transportation options as they traveled from destination to destination without having to use their cars.

But the future of the Broadway-Valdez project is now cloudy at best. The reason is that it depended heavily on redevelopment funds to get off the ground, and as of February 1, redevelopment has been eliminated statewide because of a decision by former Oakland Mayor and current Governor Jerry Brown and the state legislature to use the funds instead to help balance California’s budget.

Although the demise of redevelopment may not completely close the curtain on the Broadway-Valdez idea, it certainly will make it much more difficult to attract developers and small businesses to the area. In fact, the death of redevelopment has prompted city officials to begin a new strategy, moving away from a focus on large, national retail to a plan that would attempt to foster growth of small businesses in the Upper Broadway area in a more organic way — and thus keep dreams like Barnhart’s alive. “The plan,” Angstadt said, “is to build from the ground up.”

The annual estimated spending power of the nearly 400,000 people who live in Oakland is $1.6 billion, according to city reports. But Oakland residents tend to spend a considerable amount of their incomes shopping outside the city’s limits, often at large-scale retail centers in nearby communities. This retail leakage has worsened over the past several decades as the city failed to establish a major retail destination, while its neighbors built them rapidly. “It just didn’t happen,” Denise Conley, an economic analyst who worked on Oakland’s highly referenced retail implementation study in 2008, said of retail development in Oakland. “It’s getting worse.”

Sure, the city has successful neighborhood shopping districts, like Rockridge and Piedmont Avenue, but those small commercial areas have struggled over the years to compete against larger destination retail centers around the Bay Area. Oakland’s failure to diversify its sale tax base also is likely a reason why the city was hit harder during the Great Recession than its neighbors, losing 27.8 percent of taxable sales compared to San Francisco’s 8.5 percent and San Jose’s 10.7 percent, according to the San Francisco Business Times.

Perhaps no city capitalized more on the absence of major retail in Oakland than Emeryville, a tiny community that rapidly transformed itself into a major shopping hub. More than two decades ago, Emeryville city leaders embarked on a long-term program to use retail as an engine for growth, while also laying the foundation for a strong high-tech cluster that now sports such well-known companies as Novartis and Pixar.

Nora Davis, a councilwoman who first took office in 1988, said that voters in the late Eighties understood how important it was to adapt to the loss of the city’s heavy industry. She worked with two other councilmembers and ran on a platform to fundamentally transform the city’s economic base. “It was a conscious design to develop a mixed-use city,” Davis said, “and no way in the world could we have done it without redevelopment money.”

Although Emeryville arguably sacrificed the opportunity to develop an identity like its neighbors and instead became a shopping mall mecca, it managed to successfully avoid financial ruin while building a strong tax base at the same time. And if it weren’t for redevelopment money, it’s unlikely that Emeryville would have been able to accomplish what it did in such a short period, said Josh Simon, president of the Emeryville school district Board of Trustees. The elimination of redevelopment, Simon said, will be particularly harmful for “communities like Emeryville that are transitioning from industrial to an office/retail economy.”

Oakland, by contrast, failed to use redevelopment funds to build one or more major retail destinations in the city before redevelopment was eliminated. Instead, the city, under then Mayor Brown, focused much of its energy into revitalizing Jack London Square, downtown, and Uptown. Under his 10k Plan, Brown used redevelopment cash to fix up and reopen the Fox Theater and attract developers with enticing deals to build apartments, catalyzing the development of what is now a thriving arts and entertainment scene.

But with at least 14.5 percent of its workforce unemployed as of last November, Oakland still has the highest percentage of jobless residents in the area.

Designed in part to replace the city’s decaying Auto Row, the Broadway-Valdez project was to be behemoth in scale and scope. It called for close to a million square feet of retail and commercial office space in the Valdez Triangle, with room for hotels and 900 to 1,800 units of housing.

But without redevelopment, such grandiose plans may be now impossible. Redevelopment, for example, allows cities to combine disparate plots of land into one large plot that could then be handed over to private developers, either for free or at a reduced cost. The Broadway-Valdez project, as it was envisioned, would have required such “land assembly.”

The lack of redevelopment also will make it much harder for the city to attract capital investment in the Upper Broadway area, because investors may be concerned about not making profits down the road, said Larry Rosenthal, assistant adjunct professor at UC Berkeley’s Goldman School of Public Policy. He added that when the economy picks up, retailers will be more attracted to areas where there is already a vibrant, bustling commercial district. “It is correct to look at this shift as profound and an extremely harmful change for revitalization of depressed urban areas,” he said of the end of redevelopment.

Then there’s infrastructure. Simply put, redevelopment money helped subsidize the construction of sidewalks, bike lanes, and other improvements that are more likely to make a project feel like a “destination,” Angstadt explained. The Broadway-Valdez project called for significant infrastructure developments, including bike lanes, expanded sidewalks, and parking.

Angstadt noted that the loss of redevelopment also hampers other enticements that the city has used to attract businesses — large and small. For example, facade improvement grants, money used to make the outside of small businesses look fresh and clean, have been wiped out. Tenant improvement programs, which assisted local businesses that need cash to spice up their locations, also are now gone. In short, the elimination of redevelopment will not only make it very difficult for the city to bring in large retailers, but it also will be an obstacle for attracting mom-and-pop stores. “The elimination of redevelopment is not going to be good for small business, probably the reverse,” Angstadt noted.

So what will Oakland do? One way around the redevelopment problem, Angstadt said, may be to hard-wire entitlements into development proposals, essentially packaging pre-approved perks and conditions, such as cutting through bureaucratic red tape, in order to slash the costs of opening a major retail center, or even a small store. “That becomes one of our bigger developer incentives once redevelopment disappears,” Angstadt said.

But while the city figures out how to incentivize development in the Valdez Triangle without redevelopment dollars, artists and business owners are already plotting their own organic course that would fuse Uptown with Auto Row.

The onset of the Great Recession hit the Valdez Triangle hard. Auto Row lost dealerships, but the area has since started to experience a renaissance as entrepreneurs, artists, and restaurateurs open shops in the area.

John Mardikian, the general manager of Mua, a trendy eatery on Webster Street right where it meets Broadway, says he prefers that the area develop on its own, rather than have the city embark on a massive effort to attract large retail. His establishment has become a popular post-work hangout for local workers and residents living in the nearby condos, and he thinks that when the city steps into development issues, it “fucks it all up.”

Still, there is reason for hope. Quan said last week in her state of the city speech that retail sales were up 12 percent in Oakland.

And while Barnhart is a supporter of redevelopment, the slow and steady growth that is happening in the area is helping keep her dream, and her store, Bay Area Bikes, alive. “Retail begets retail — just like restaurants,” she said. “As more stuff has grown around them, it has helped our business.”