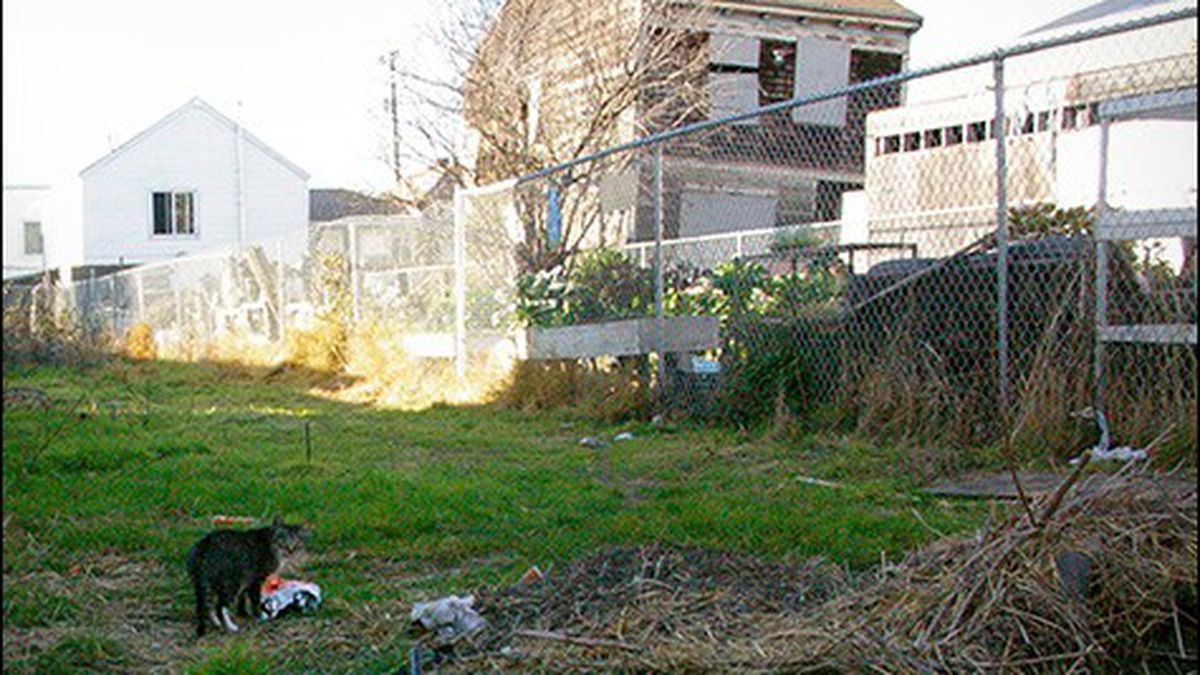 Five cats emerged from the shadows of an abandoned West Oakland backyard. “It’s party time,” whispered Syar DaLi, one of five volunteers who were attempting to trap a large group of stray cats living near a burned-out house on a residential street near Interstate 580. The team had just begun lining the dimly lit sidewalk with small cages filled with cat food when the strays scurried in their direction. Soon, four more cats appeared.

The presence of the volunteers drew the attention of people who were hanging out on the otherwise quiet block.

“There’s a million of them!” one onlooker shouted at the volunteers, gesturing toward the stray cat colony.

Sarah Rogers, the ringleader of the group, began to worry that all the commotion would frighten the cats away. Getting the strays to appear, it turned out, was easy. Getting them inside the cages, however, was a different story.

“There’s no perfect science,” said Rogers, after the group considered whether it was worth jumping the fence of the backyard to get closer to the cats. (They decided it wasn’t.)

This tactic is called “trap-neuter-return,” or TNR for short. As the name suggests, it involves trapping feral cats, sterilizing them via spaying or neutering, and returning them to their original location — or, when possible, getting them adopted.

On a typical TNR excursion, Rogers explained, volunteers place traps close to the cat colony and wait for the strays to step inside. On this particular night the volunteers had the help of a couple who lives nearby and has been taking care of the cats.

“We need all the help we can get,” said the wife, Maria Mejia. She estimated that there have been about twenty stray cats in the yard for the past several years. “I want the cats to be okay.”

Mejia and her husband helped summon the cats with food and attempted to pick them up in order to put them in the cages. The kittens were largely cooperative, but some of the adult cats were resistant. Rogers said handling the cats is not typical or ideal in TNR, but that she made an exception in this case since the residents who have taken care of the cats were helping. Ultimately, the tactic paid off.

In fact, the volunteers ended up trapping more strays than they had originally planned: five kittens and eleven adults. Later that week, Rogers took them to get spayed and neutered, but instead of releasing them, all of the kittens and six of the adults were chosen to be put up for adoption. She said she returned the remaining five adults to the original location because they weren’t socialized enough to be adopted.

Rogers is one of a handful of animal rights advocates who devote a significant amount of time and energy to TNR in the East Bay. Although she works full-time at a consulting firm for nonprofit organizations, she founded the volunteer-run Feral Change, which is dedicated to TNR, last May, and this year she’s expanding its efforts with a more regular trapping schedule. Last year, she estimated that she trapped around 75 cats. This year, her goal is to capture ten to twelve a week with the help of a core group of ten to fifteen volunteers. Feral Change operates out of a small space in the warehouse American Steel Studios in West Oakland, where Rogers can temporarily house up to a dozen cats. The East Bay nonprofit Island Cat Resources and Adoption pays for the rescued cats to be fixed; in exchange, Rogers does fundraising for the organization.

Advocates say TNR is the only humane and effective way to manage stray cats in an urban environment. The alternative is to do nothing and let the homeless population multiply, which can lead to high levels of feces and fights between strays. Sometimes residents get so frustrated that they poison the cats. Another option is to euthanize feral cats, which animal welfare advocates say is both cruel and does not solve the problem. Killing off an entire stray colony can create a “vacuum” of unclaimed territory that attracts unneutered cats from nearby neighborhoods, according to the website of Fix Our Ferals, another East Bay TNR group.

“It is about controlling and managing the feral cat population to the best of our ability for the benefit and health of the Oakland community, as well as the cats,” said Rogers, who said that the initialism TNR should have an “M” tagged on for “manage.” She tries to periodically check in on colonies that have gone through the TNR process.

Her main motivation, she said, is saving cats. While some argue that euthanasia can be done “humanely,” Rogers said, “It’s still killing a living being.”

Mariah Dancing, a resident of West Oakland who volunteers with Feral Change, explained it this way: “Trap-neuter-return is the most respectful way to deal with a problem that [humans] created.”

Stray colonies exist all over the East Bay, said Rogers, and their numbers are growing in West Oakland. It’s difficult to count the exact number in a given area, but there could be tens of thousands of feral cats in Oakland, according to the US Humane Society’s population formula. And residents who live near these colonies see firsthand how rapidly feral cat populations can increase. Dancing said when she first moved into her West Oakland home in the fall of 2009, there were just a few strays in the area. But by spring of 2010, there were about twenty.

“It was pretty extreme for a while,” she said, noting that after the cats were sterilized and some were adopted, the stray population has leveled out at eight.

Officials with Oakland Animal Services, the city-run shelter, reported that its euthanasia rate for cats has decreased slightly over the last four years. In 2011, OAS euthanized 894 cats, which was roughly 40 percent of the total amount of cats it took in that year. In 2013, the agency euthanized 571 cats, roughly 31 percent of its total intake for the year, according to interim OAS director David Cronin. (OAS takes in more than 6,000 animals per year and houses 300 to 400 on a given day.)

Advocates hope that TNR will help reduce the number of cats that end up at shelters and rescue organizations — and thus prevent many from being euthanized. If Rogers meets her target, she’ll fix more than five hundred cats — primarily those from West Oakland — this year.

However, Rogers isn’t alone in her efforts. Some TNR volunteers don’t publicize their work and often trap alone, she said. Rogers has been trapping strays on and off for eight years in Oakland, but was fairly discreet about it before last year. More advocates are now open about their TNR initiatives in the East Bay and are increasingly collaborating, she said, partly because the practice has become more widely accepted. The cities of Oakland and Berkeley have both embraced it as an effective method to control the feral cat population.

Rogers said she first got interested in TNR when she was trying to manage a massive cat colony in her Rockridge neighborhood, but she has been rescuing animals since she was a young girl. She grew up in San Francisco in a home that her parents also ran as a homeless shelter. “Service to the community runs in my blood,” she said.

“She’s like nobody I’ve met before,” Dancing said of Rogers. “She’s really an incredibly kind-hearted person, and I think that is what motivates her the most. She just clearly really feels for the cats — and has no shortage of energy for them.”