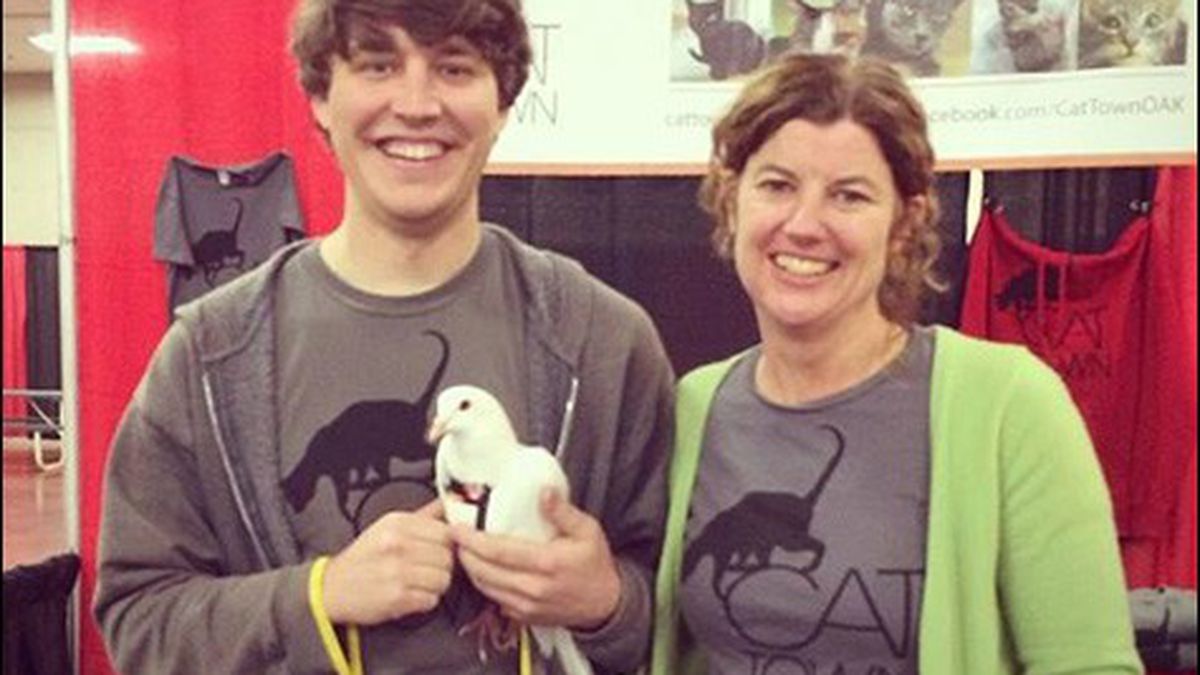 Cat Cafe to Open in Oakland

Local musician Adam Myatt teams up with Cat Town to create a "playland for cats."

Last week, Bay Area residents who’ve longed to pet a cat while sipping tea received some good news: a cat cafe, KitTea, is coming to San Francisco. What people didn’t know is that the “cat and human oasis” will have an East Bay counterpart. Yes, a cat cafe is coming to Oakland.

The East Bay project is the work of Adam Myatt, an Oakland musician, recording engineer, and “cat-tographer,” and Ann Dunn, founder and president of local rescue organization Cat Town. Although the two Bay Area cat cafes aren’t related, it’s also not just coincidence that their arrivals come so close together. Myatt said enthusiasm for cat cafes has reached a fever pitch. “It’s a pretty weird concept and a lot of fun,” he said. Also: “The Internet loves cats and people are on the Internet.”

Cat cafes have long been popular in Japan, where small living quarters means fewer people are able to keep pets, creating demand for human-feline interaction. And while cat cafes have begun popping up around the globe, none have yet opened stateside. Dunn said the high cost of maintaining the cafes and taking care of the cats, along with the health-regulation challenge of having food and animals in the same location, have proven to be formidable obstacles — until now.

Dunn and Myatt said they have sufficient support to make their business — which they’re calling Cat Town Cafe — a reality: Pet Food Express has offered to cover the cost of their rent, and Oakland’s zoning and health departments have given them assurances that their plan is feasible, so long as they follow strict health-code guidelines.

Unlike many cat cafes around the world, whose main purpose is to allow humans to pet cats (often for a fee), Cat Town Cafe’s main goal will be to facilitate adoptions. Dunn said they’ll work with Oakland Animal Services to identify socialized, highly adoptable cats that will live at the cafe, cage-free, attended to by staff and volunteers. The space will be divided into two separate areas: a cat-free cafe, which will sell coffee, espresso drinks, and, potentially, food prepared off-site; and the “cat zone,” which will take up the majority of the space and will allow humans to play with the felines. Although the goal is to encourage adoptions, Myatt said he also wants the space to be a “playland for cats.” His design plan includes a mini skyline of Oakland on a scale that will allow the cats to “be like Godzilla.” But the structures will also be functional: He imagines making the iconic port cranes double as cat beds. Dunn said cat behavioralists Feline Minds will assist with the layout.

Dunn and Myatt also have the endorsement of animal lovers. Myatt’s photos of feral cats in West Oakland, which he posts on Instagram and Facebook, have attracted hundreds of followers, and his popular calendar is sold at street fairs, local stores, and online. Dunn, a former volunteer at Oakland Animal Services, also has connections through her rescue work. She started Cat Town three years ago as a way to rescue cats that are less likely to be adopted through Oakland’s municipal-run shelter. Her organization receives grant money from Maddie’s Fund, which allows it to waive or greatly reduce its adoption fees.

At Cat Town Cafe, there will also be clearly marked hand-washing stations for patrons to use upon entering and exiting the cat zone. Litter boxes will be located in a room away from the main cat area, and patrons who want to watch cats but not interact with them will be able to do so through a window from the cat-free side. (The cats will also be able to retreat to a human-free zone.) Visitors will be able to visit Cat Town Cafe for free, but depending on demand, may be subject to a time limit.

But first, Myatt and Dunn need to locate the right space. They’re currently focused on the Telegraph Avenue and Broadway corridors from Jack London Square to 51st Street, and are aiming for a spring or summer opening. They’ve just launched a Indiegogo campaign to help with the build-out of the space, with a goal of $60,000.

Myatt is confident the cafe will come to fruition: “Oakland is just the right amount of crazy to make this happen.”

Kathleen Richards
Previous articleUnder-the-Radar Soup in Oakland Chinatown
Next articleMid-Week Menu: A Provencal-Style French Bistro on Lakeshore, the New Phat Beets Market Location, and a Brick-and-Mortar for No No Burger
18,638FansLike
0FollowersFollow
66,993FollowersFollow