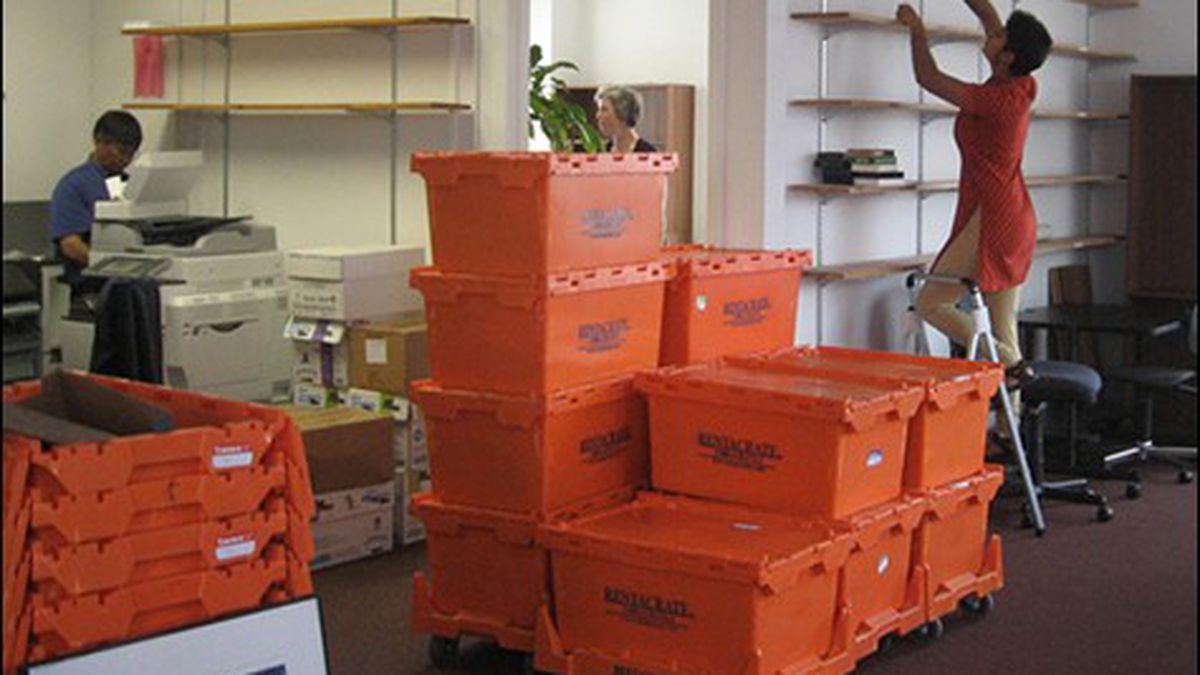 Clean Water Action might have been willing to stomach a 20 percent increase in rent to renew the lease on its downtown San Francisco location this year. But the landlord’s demands were much higher: In order to stay, the California chapter of the national nonprofit organization would have had to pay three times as much. “It was just completely impossible,” said Miriam Gordon, California director for Clean Water Action. “Tripling our rent was certainly out of the question.”

The group searched for new locations in San Francisco, but found nothing feasible. So in March, the environmental nonprofit packed its bags and headed across the bay to its new office suite in Frank Ogawa Plaza in downtown Oakland. The space is much nicer, Gordon said, and the organization is paying roughly the same price in rent per square footage as it was in its original San Francisco lease.

There was another important benefit to the move: Many of its partner nonprofits were also relocating from San Francisco to Oakland for the exact same reason. “I call it the great nonprofit diaspora,” she joked.

In the environmental sector alone, there are at least four additional nonprofits that have recently moved offices from San Francisco to Oakland: Food and Water Watch, the Pesticide Action Network North America, As You Sow, and Green Corps. The trend over the last year, however, extends to organizations that do a diverse range of work, including direct social services, national LGBT policy advocacy, faith-based activism, prisoner’s rights work, and more.

The common denominator is skyrocketing rents as leases signed during the height of the recession expire. As of October of this year, the average asking rental rate for office space in San Francisco was $50.30 per square foot annually, according to Garrick Brown, director of research for Northern California for Cassidy Turley, a commercial real estate company. In downtown Oakland, that equivalent average is $29.28 per square foot annually. The current average for office rent in San Francisco reflects a nearly 60 percent jump since 2010 when rents fell to a low of $31.51 per square foot, Brown said. According to his firm’s data, one nonprofit organization that moved across the bay in the spring signed a lease in Oakland with a rate of $20.40 per square foot — a fraction of the current average in San Francisco.

Additionally, the vacancy rate for office space in San Francisco is now at 8.4 percent, which is the lowest level Cassidy Turley has recorded since 2001, Brown said. And while there’s more than two million square feet of new office space under construction in the city, it’s unclear if this real estate will be affordable for nonprofits once they are on the market, he said. Given these factors, Brown predicted that companies will continue to be priced out of San Francisco through the first half of 2015.

In addition to anecdotal evidence of relocations in 2013, Cassidy Turley’s research shows that organizations are continuing to look to Oakland as an alternative option. The firm said it is tracking nine different office tenants — some of which are nonprofits — that currently reside in San Francisco and are actively exploring new Oakland locations, representing a total interest of 185,000 square feet.

The Pesticide Action Network North America moved in fall 2012 to a downtown Oakland office where rent was 30 percent cheaper than that of its downtown San Francisco home of twelve years. The group’s lease was set to expire in spring 2013, and rent was expected to rise by 50 percent, said Steve Scholl-Buckwald, chief financial officer. “We have always had more staff living in the East Bay than anywhere else,” he noted, adding that three employees have since moved here from San Francisco, so that about 85 percent of the staff now live on this side of the bay. This shift comes after the organization spent nearly three decades in San Francisco. In the new Oakland office, he said, “Generally, people are way happier.”

For some longtime San Francisco activists and organizations, however, the movement to the East Bay is a somewhat depressing sign about the state of advocacy efforts and social services in the city. “It’s only the really super endowed … organizations that can afford to stay in San Francisco,” said Gordon. “As someone who has always worked in downtown San Francisco, it’s incredibly disappointing to see San Francisco become this monotonous center for young, startup techie people — and I also think it’s unbelievable that these young startups are willing to pay such high prices for rent. The landlords are getting a great deal with these companies.”

Indeed, the nonprofit departure from San Francisco coincides with the city’s rapid growth as a hub for technology startups. In 2012, private tech startup companies across the Silicon Valley and San Francisco region raised $8 billion total in venture capital funds — and are on track to raise nearly $9 billion in 2013, according to data from research firm CB Insights.

The surge in this sector helped create an environment that made it increasingly difficult for City of Refuge United Church of Christ, which runs a nonprofit foundation, to remain in San Francisco. The church recently sold its SoMa building on Howard Street and bought a space in East Oakland on Enterprise Way near the airport. The organization was able to purchase the new property for roughly two-thirds of the San Francisco selling price and gained an additional 10,000 square feet in the process. And a lot more parking spaces.

“It became clear what the neighborhood was saying to us: This is not a haven for social services,” said Yvette Flunder, senior pastor with the church and CEO of the Yvette Flunder Foundation, the nonprofit affiliate. “By and large, if you look around, there has been a degree of exodus of social services from the city. … So many [organizations] have been horribly defunded, anyway.”

At the same time, she said, “There has been an exodus from San Francisco of people of color.” That means more potential clients — the foundation supports people with HIV and often works with LGBT people of color — are living in Oakland and throughout the East Bay, she said.

City of Refuge actually got its start in Oakland 22 years ago, but almost immediately moved to San Francisco where it had remained until this fall. The return to Oakland, where the church opened its doors in September, comes at a time when more than half of the roughly 600-member congregation lives in the East Bay, Flunder said.

Advocates from several organizations pointed out that one of the positive impacts of the high San Francisco commercial rents is that nonprofits are bringing critical services closer to people that need them. As the Express reported in a recent feature on discrimination against transgender people in the East Bay, City of Refuge was one of three nonprofit organizations that work with this population to relocate from San Francisco to Oakland in 2013.

“We’ll continue to do that work, and God knows that work is needed in Oakland,” said Flunder. City of Refuge prides itself on being a faith-based organization that is inclusive of LGBT people, she said, adding that there’s a demand in Oakland for this kind of liberal church community.

Jo A.S. Loss, executive director of the Volunteer Center of the East Bay, which connects volunteers to nonprofits, said there is increasing recognition that poverty is widespread in the East Bay, even in more suburban areas, and that agencies and charities have to look beyond the urban core of San Francisco. That makes relocations to this side of the bay a win-win, she said, considering that nonprofits are always facing pressure to be as efficient as possible with their operating budgets.

“It’s really important that you can prove to your funders that you are providing as much direct service as possible,” she said, “and that you’re also operating in a method that is enhancing your sustainability.”