Inside the meaty, fatty, deep-fried center of the East Bay's latest dining upheaval. 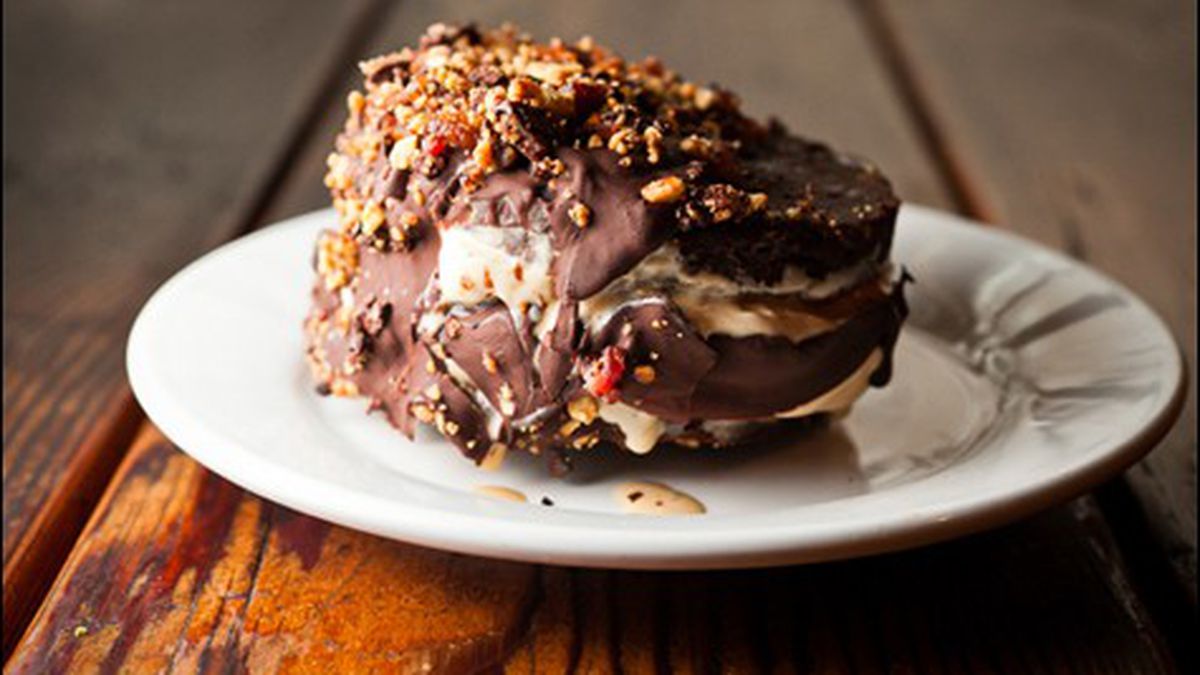 Twenty, ten, or even five years ago, any diligent alt-weekly food writer may have devoted these pages to a specific vision of the East Bay’s food future, one in which healthy food reigned. This is, after all, the place where school-lunch reform was born and “organic” was all but invented; where people are, statistically, among the most health-conscious in the country; where the hopes of America’s food future have been pinned for decades. As broad prognostications go, it wouldn’t have been all that unreasonable to predict that the Bay Area was set to be ground zero for some kind of big upheaval, all of us abandoning our Big Macs en masse and embracing kale salad.

But a funny thing happened on the way to the health-food revolution: namely, it didn’t happen. Or, at least, not fully. Of course, super-healthy, vegan, vegetarian, and organic food abounds in the East Bay and beyond: We’ve got vegan soul food and carob sorbet and natural-foods stores on practically every corner. But we’ve also got deep-fried Twinkies, bacon ice cream, fine-dining entrées composed of little more than one kind of animal fat slathered in another, entire restaurants devoted to mac ‘n’ cheese and cinnamon buns. And none of them appear to be going away anytime soon. While we did, by and large, abandon our Big Macs, we appear to have replaced them not necessarily with raw greens and sprouted bread, but with grass-fed burgers smothered in artisan mayo and boutique cheese. The East Bay may be health-food heaven, but it’s also home to a growing number of midrange and upscale restaurants that are making a killing serving delicious, fatty, meaty, rich comfort food, often to out-the-door lines and rave reviews.

At least some of the credit/blame/attention for the trend, at least locally, goes to Sumo Grub, which occupies a tiny storefront across from Berkeley High School and which has managed to spin a business model out of, essentially, tempura-frying everything its chefs can get their hands on: Twinkies, Ding Dongs, ice cream, hot dogs, Oreos, pizza, mac ‘n’ cheese — or anything else, for that matter, seeing as Sumo Grub proudly and generously offers a “you bring it, I tempura it” policy. A few blocks up the hill, on the Cal campus’ West side, Cinnaholic makes sure everyone can partake in the fatty fun with what must be the world’s only vegan cinnamon bun restaurant; meanwhile, Munchy Munchy Hippos hand-delivers calorie bombs like bacon mashed potato cheeseburgers and Philly nacho cheesesteak fries late into the wee hours and largely to students.

High school and college kids can, of course, always be expected to be fans of all that is cream-filled, deep-fried, covered in mayo, and otherwise stoner-friendly — but what’s changed recently is that finer-dining establishments have been getting into the game, too, with dishes that often subscribe to the sustainable-local-high quality holy trinity but are about as far from quinoa and tofu as you can get. Chop Bar, for example, has long gotten full-mouthed raves — not to mention a Best of the East Bay nod — for its oxtail poutine entrée, which is composed of deep-fried potato chunks, oozy-chunky-rich oxtail gravy, and melted boutique cheddar; the restaurant also recently debuted a dessert that it’s billing as a “bacon brownie ice cream sandwich, served with burnt caramel ice cream and dipped in chocolate and cocoa nibs.”

The afore-alluded to Homeroom attracts hour-long waits with its classed-up takes on mac ‘n’ cheese, which employ ingredients like Point Reyes Blue cheese and Niman Ranch hot dogs. Plum Bar, Daniel Patterson’s new, neutral-hued experiment in (slightly) more casual drinking and dining, has on its ever-changing menu dishes like grilled cheese, double cheeseburgers, and the aptly named “fried stuff” (Brussels sprouts, pig’s ears, chicken skin, and beef chicharrón, at least when our food critic visited); all together, out of the thirteen items listed on the menu currently posted on the bar’s website, only two could reasonably be construed as “healthy” — and one of them, a soup, comes with fried chicken skin on top.

Emeryville’s Honor Bar also offers bone marrow (in this case, served with — wait for it — bacon relish), as well a side of (delicious) French fries that comes with both aioli and ham jelly in addition to ketchup for dipping. (The bar and grill even cheekily acknowledges its allegiance to all things animal fat with a menu admission: “we honor…fresh vegetables — although you’ll have to look hard, they are there!”) And both Hibiscus and Miss Pearl’s both recently reoriented their menus from Caribbean to American Southern, thereby joining the ranks of several other Bay Area restaurants — including Thomas Keller’s! — offering upscale takes on fried chicken. (Miss Pearl’s also offers as a bar snack what may be the single best crystallization of the trend: ham and cheese grits, deep-fried and served with bacon mayo. For those of you keeping score at home, that’s simple carbohydrates mixed with two different kinds of animal fat, fried in oil, and then topped with a mixture of egg yolks, oil, and bacon.) All told, the East Bay’s a veritable explosion of bacon, butter, and bone marrow, and there’s no end in sight.

The somewhat obvious, pop-sociological explanation for all this is that in a recession, people crave comfort foods. (That idea certainly holds some scientific water: In a nutshell, sugar and fat stimulate the brain’s limbic rewards system — and so, the logic goes, during difficult times, we tend to turn toward foods that are more likely to provide those quick mental rewards.) Or maybe it’s a backlash against all those years of health-food supremacy. Another theory is as simple as food trends’ tendency to snowball quickly (remember cupcakes?). But more likely, it’s all that and more, a series of cultural shifts working in concert.

According to Honor Bar’s Jordan Grosser, one cause of the comfort-food resurgence may be the rising popularity of whole-animal cooking — that is, the idea that the most humane and sustainable way to cook meat is to use as much of it as possible. As that ethos continues to gain traction, especially among the progressive-minded chefs of the Bay Area, restaurants can no longer get away with serving just the leaner, often more popular parts of the animal and throwing the rest away. In that light, it makes sense why Grosser serves bone marrow. (It also helps explain Plum Bar’s fried beef tendons, chicken skins, and pig’s ears.)

And at the same time, with organic, fresh, ethically farmed, and sustainable ingredients becoming better, cheaper, and more common, chefs now have options — and ambitions — they may not have had before. While there was a time in not-so-distant history when “organic” only existed to modify garden-grown vegetables and “artisan” only applied to, well, art, the high-quality ethos has now spread to all facets of the food world, with purveyors like Cowgirl Creamery and Niman Ranch proving, respectively, that there’s more to cheese than Tillamook and more to beef than factory-farmed meat and frozen hot dogs.

Those advances are undoubtedly what made places like Cinnaholic possible, and they also appear to have empowered chefs to buck and bend the slow-food movement in significant ways. If, forty years ago, Alice Waters pioneered the then-radical idea that the best food was the simplest, freshest, and healthiest, a new generation of cooks and restaurateurs — many of whom trained with Waters or at least grew up in the shadow of Chez Panisse — is now taking that a step further, showing that quality (in the holistic sense) doesn’t necessarily need to mean organic greens for dinner and fresh fruit for dessert. “What Alice Waters did was take these really high-quality meats and vegetables and essentially let them speak for themselves,” said Chris Pastena of Chop Bar. “And what we’re doing is taking that same high-quality product and tweaking it.”

Customers are, of course, eating it up. Pastena described the response to Chop Bar’s bacon-brownie dish as “insane,” and according to Homereoom co-owners Allison Arevalo and Erin Wade, the single most-requested addition to their menu is a lobster mac ‘n’ cheese. As Arevalo put it: “I feel like people are really excited about simple things that can be done really well — so in our case, you’re nostalgic for mac ‘n’ cheese, but you don’t necessarily want the Velveeta you had as a kid.” Call it childhood comfort food for adult palates, or a health-food backlash, or maybe just evolution. At any rate, enjoy it. Though probably in moderation.