.The Long Division of Jonestown Survivors

Thirty-five years after the horrific mass suicide in Guyana, former Peoples Temple members and relatives of the deceased are conflicted on the best way to honor the dead at the East Oakland gravesite. 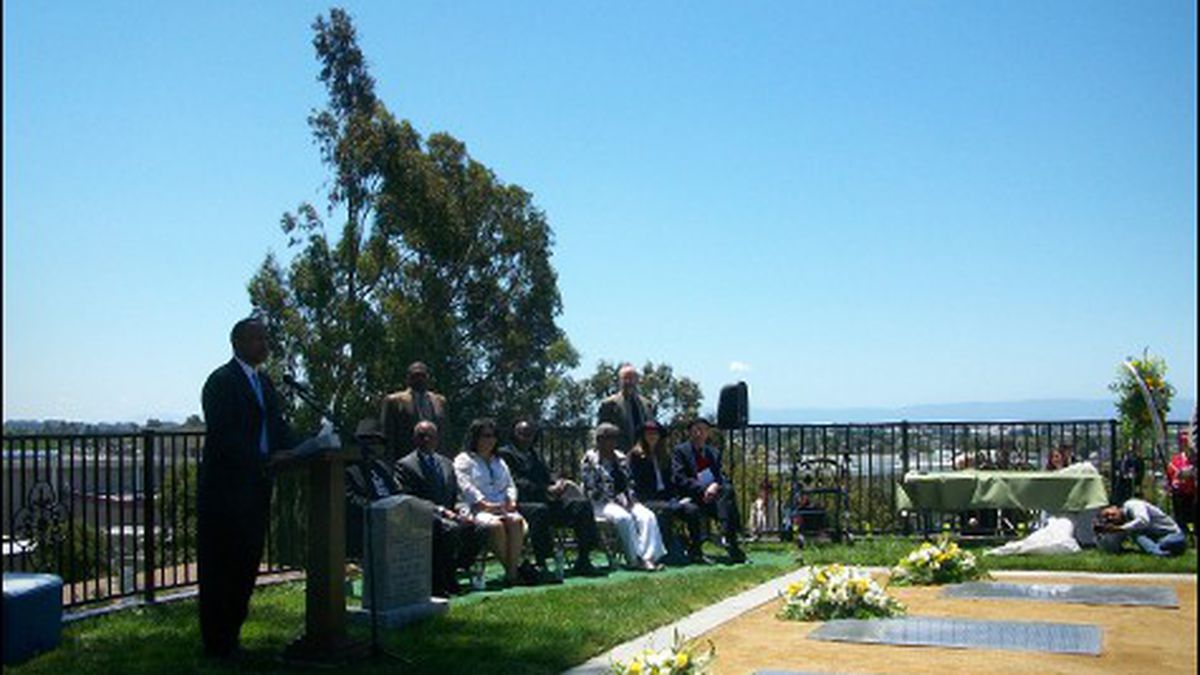 On May 29, 2011, Jim Jones Jr. felt a new kind of peace regarding the mass murder-suicide led by his father, the Reverend Jim Jones, three decades earlier. That Sunday two and a half years ago, he and several family members of the deceased unveiled a simple memorial at Evergreen Cemetery in East Oakland — four stone panels listing the names of the 918 people who died in Guyana on November 18, 1978 in the event that became known as the Jonestown Massacre.

“It gives me a sense of closure that their names are recognized somewhere in this world for trying to do a positive thing,” said Jones, who now lives on the Peninsula and was a member of the fundraising committee that brought the memorial to Evergreen. “It didn’t work out. The ending was horrific, but you know something? Everyone’s name that is listed on there was trying to make a better world. And it went terribly wrong.”

Monday is the 35th anniversary of the massacre, and since the placement of those stone panels at Evergreen, a divide among the survivors and relatives of the dead has grown — a chasm most evident in the two separate events that will take place next week at the cemetery. At 11 a.m., Jynona Norwood, a Los Angeles-based pastor who is said to have lost 27 family members in the massacre, will lead a “victims memorial service,” as she has done for decades. And at 2 p.m., former members of Peoples Temple, the group the elder Jones founded and brought to the South American nation Guyana, will hold a separate service at Evergreen, billed as a “casual gathering with no planned program” for survivors, family members, and close friends. This division stems from a fundamental disagreement on how to commemorate Jonestown — a tension greatly exacerbated by the controversial inclusion of Reverend Jim Jones’ name in the new memorial stones.

Jones orchestrated the deaths of the nearly one thousand Americans — including hundreds of children — in Guyana. Among the fallen were 907 Jonestown residents who drank or were forced to ingest potassium cyanide mixed into a vat of punch and tranquilizers, as well as two who died of gunshot wounds. Congressman Leo Ryan (D-San Mateo) and three journalists — whose trip to Guyana inspired a panicked and mentally ill Jones to lead the poisonings — were shot in an ambush at a nearby airstrip, where a Jonestown “defector” trying to escape was also killed. (Four others died in a murder-suicide that day in Georgetown, the capital of Guyana, bringing the death toll to 918.) The event, which marked a violent end to Jones’ attempt to build a utopian society, was the largest non-natural-disaster-related single loss of American civilian lives prior to September 11. The massacre has been the subject of documentaries, books, and more.

The anniversary ceremony in East Oakland, where about four hundred Jonestown victims are buried, often gets some local media coverage, but the group that has branched away from the high-profile morning service has generally received less attention. Individuals who are coordinating and attending that later event told the Express that Norwood’s service has over the years become too religious and too focused on the evil of Jim Jones — as opposed to remembering and honoring those who died.

“For a long time, there really was a single service and everyone felt welcome,” said Fielding McGehee, chief researcher with the Jonestown Institute, an online hub — sponsored by the Department of Religious Studies at San Diego State University — that contains a wealth of information and essays on the event. “But five to seven years ago, there really seemed to be a shift in tone in Jynona [Norwood]’s service. A lot of people who were former Peoples Temple members really felt disrespected.” Rebecca Moore, McGehee’s wife and a professor of religious studies at San Diego State who lost two sisters and a nephew in the massacre, argued that November 18 should be a simple day of reflection.

“It’s about people that we loved and knew, people that we miss,” Moore said. “I really don’t want to use their deaths as the platform for discussing any other issues. … The agenda [of Norwood’s service] has been to focus on Jim Jones and the dangers of cults, and, to be honest, the message seemed hate-filled.”

Laura Johnston Kohl, a former member of Peoples Temple who survived the massacre, will help facilitate the afternoon ceremony, which, she said, has evolved from a group of survivors who grew increasingly uncomfortable with the tone of the morning event. “I wanted it to be a day that I could actually get some peace.”

Jordan Vilchez, who joined Peoples Temple as a teenager and lost her sisters and nephews in the massacre, added of Norwood’s service, “The tone of it was not a memorial tone. It was not an honoring tone. It was more a tone of anger. … It was like a show.”

Reached by phone, Norwood repeatedly told me over several weeks that she would agree to be interviewed for this story, but eventually stopped responding to my inquiries. Through her website Jones-Town.org, and through press releases and letters online regarding her independent efforts to raise money for an Evergreen memorial — without Jim Jones’ name — she has made clear her disdain for the current memorial.

“Injustice has been done in the annals of history. Revisionists have made a stance against truth and righteousness and the shedding of innocent blood caused by their leader, Jim Jones, by memorializing his work as noble and ‘good,'” she wrote in a letter posted on her site last fall. In a “911 CALL TO ACTION” posted on her site, she wrote, “Who among us would sit quietly while a memorial was built to honor Adolph [sic] Hitler whose demonic acts killed so many innocent people during the Holocaust? In the same manner, how can we sit quietly while another madman is being honored in one of the most shameful massacres of our people in recent history?” Congresswoman Laura Richardson (D-Los Angeles) penned a letter last year in support of Norwood, arguing that “immortalizing” Jones was an “insult to the memories of those deceased.”

Norwood has gone so far as to sue Evergreen, the private nonprofit cemetery, arguing that it violated an agreement for her own memorial. The cemetery, in court documents, has pointed out that Norwood had funding troubles and that, in her efforts to implement a memorial, did not abide by a basic provision of the cemetery — that the structure be approved first to ensure it would not be physically damaging to the site. The courts have ruled in the cemetery’s favor, but Norwood has continued to pursue litigation, according to case records.

“There’s no conceivable way that this memorial is coming down,” Ronald Haulman, executive director of Evergreen Cemetery, said of the one with Jim Jones’ name on it. Evergreen agreed in 1978 to bury the unclaimed bodies from Guyana — a task that sites around the country refused to take on. While Haulman emphasized that the cemetery is not interested in eulogizing someone who committed these heinous crimes, he said that the inclusion of Jim Jones on the memorial stones — with no special fanfare — seemed reasonable. He added that the cemetery is happy to help facilitate different ceremonies on November 18. “We do really appreciate both of the organizing groups that have come out to the cemetery in the spirit of what they’re trying to accomplish.”

The feud over the memorial, however, has solidified a divide, Moore said. McGehee and Jim Jones Jr., who is the adopted son of Reverend Jim Jones, both argued that it was a matter of historical accuracy to include Jones’ name.

“I’m a purist. I don’t believe in altering anything,” said Jones Jr., who was eighteen years old and in Georgetown on the day of the massacre, which also killed his mother and four of his siblings. “It’s a statement of loss. It’s a place that people can come and take their time to think about their loved ones.”

He added, “At the end of the day, he is still my father. I can’t change that.”

McGehee, alongside Jones Jr. and John Cobb (who also lost relatives in Jonestown), helped raise more than $20,000 for the memorial. McGehee emphasized that Jim Jones is one of 918 names listed in alphabetical order with no special treatment. “Our position was Jim Jones died that day. Jim Jones was a victim of his own madness as well as anybody else. Our feeling is this is a memorial. This is not an opinion piece.”

While the inclusion of Jones’ name sparked a fair amount of debate, for some survivors and relatives, it was important that the site have some kind of memorial implemented after so many years. McGehee and the other fundraisers say they ultimately had about 120 different financial contributors to their project.

“Some people went every year waiting to see something permanent put there,” Haulman said.

Those who have chosen to skip Norwood’s service have formed something of a community of former Peoples Temple members. This year, for example, they will host a potluck the Sunday before the memorial service, and a conversation and reflection at a nearby restaurant afterward. And for some, having this group is part of the long process of recovery.

“We were trauma victims and we survived,” said Kohl, later adding, “In a way, I’m still on the search. There are certain parts of Peoples Temple that I have not been able to replace. … There was a part of Peoples Temple that Jim couldn’t screw up, which was our friendships. I don’t underestimate his insanity. … I blame it for many things. But I haven’t been able to find what he had put together — this huge, really fascinating diversity, [a group of] non-judgmental friends. I want to honor that.”

Vilchez, who lives in Richmond, said that part of her own process of moving on with her life post-Jonestown has involved letting go. “It doesn’t do any good to hold on to anything,” she said. While she emphasized that she cannot excuse or condone the actions of Jones — and all those who poisoned others that fateful day — she added, “I have been able to forgive him for his part in this. … That is the best way I can honor all those who died.”