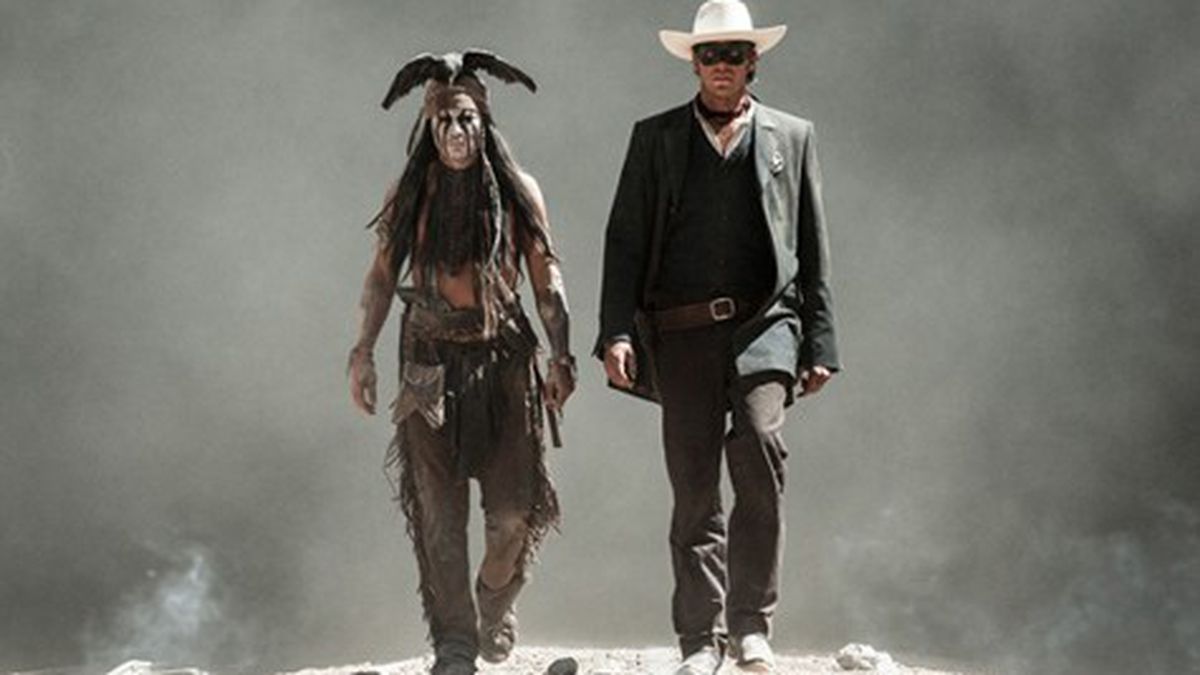 Johnny Depp. Gore Verbinski. The Lone Ranger and Tonto. The star and filmmaker of three out of the four (so far) Pirates of the Caribbean movies. Can you imagine any circumstances in which The Lone Ranger could possibly be any good?

Well, maybe if we squint at it long enough. Depp/Verbinski’s Western has a few drawbacks. It’s hopelessly corny, stuffed to the gills with wasted special effects, and a good forty minutes too long – in other words, the ideal Disney summer movie. Authentically made up as the title hero’s faithful Comanche companion Tonto, Depp resembles the missing member of KISS. While he minces around the desert with a dead bird on his head, sprinkling dried corn and performing slapstick routines with Silver the horse, his vocals recall Charlie Chan, Hunter S. Thompson, and, once or twice, Jay Silverheels, the original TV Tonto. His tag line is “Nature is most definitely out of balance.” Chalk up another impenetrable Depp performance.

Tonto’s job is enabling brave-but-awkward nincompoop John Reid, aka the Lone Ranger, aka Kemo Sabe (Armie Hammer), to fight scrofulous outlaw Butch Cavendish (William Fichtner) and squelch the schemes of greedy railroad magnate Latham Cole (Tom Wilkinson). Capitalist marauder Cole wants to steal a mother lode of silver, blame everything on the Native Americans, and turn the West into some sort of theme park. Verbinski samples Sergio Leone, Sam Peckinpah, his own animated Rango, The Searchers, Barry Sonnenfeld’s version of Wild Wild West, and Little Big Man (the framing device with Tonto and the little buckaroo). Composer Hans Zimmer recycles a few Ennio Morricone themes, too. At one point the US cavalry slaughters an entire Indian village, but we’re hustled right past that to focus on Tonto’s soul-sickness.

The Lone Ranger has all that going against it, but as the hours pass we can’t help noticing that someone — presumably Verbinski, producer Jerry “Ka-Boom” Bruckheimer, or some combination of the three screenwriters — has taken some time and spent a lot of money to ensure a wealth of historical detail. Further, there’s a skeptical attitude toward rich old men rapaciously devouring the land and its people for profit, with the backing of the law and the army. With just a few changes — like ditching the Lone Ranger, Tonto, and Silver — this could have been an entirely different movie. The outlines are there. Is there a provocative, socially conscious, rabble-rousing adventure spectacle inside this mess, struggling to break out? Perhaps. But who has time to hypothesize about a Johnny Depp movie at this point?