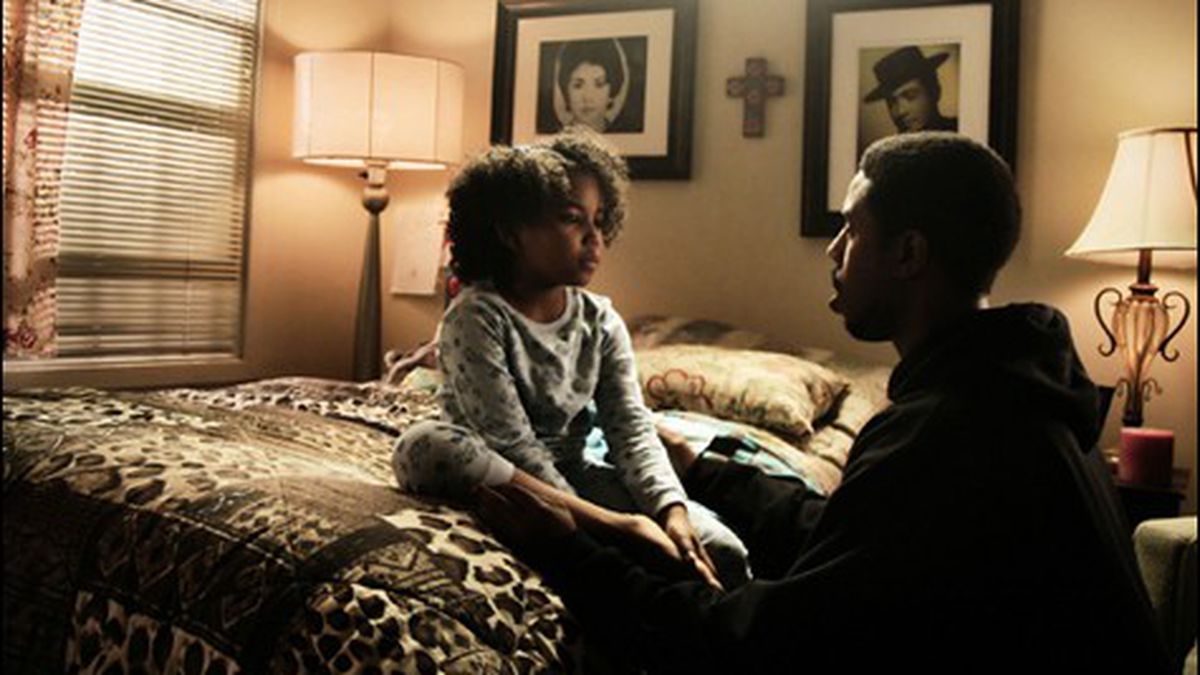 It happened in Oakland.

The thing we need to continually remind ourselves about Ryan Coogler’s Fruitvale Station is that it is not a documentary, but a dramatized work based on a real-life event. The killing of Oscar Grant in the early hours of New Year’s Day, 2009 is the epitome of a loaded topic, especially in the East Bay, but that doesn’t mean that a filmmaker shouldn’t explore the meaning and context of Grant’s death in a narrative framework, with complete freedom to add or subtract characters and scenes to suit his artistic purpose.

Writer-director Coogler’s goal is clear — to put a human face on Grant, to make him recognizable, to sketch in a few of the details of his life (the factual details, but also some metaphorical ones), so we can try to understand how a young man’s life can be so hurriedly wasted. We need to know who Oscar Grant is, not only to discover the truth about him, but about ourselves and our construction of everyday social reality.

Oscar, as portrayed by TV actor Michael B. Jordan, is no angel. From strategically placed flashbacks we learn that he has served time in San Quentin for drug dealing, and as we follow him in the last days of his life we see him reverting to his familiar connections, but at the last moment throwing away the bag of weed he was going to sell. Oscar has a short fuse, and there are those from his days in prison who consider him a snitch. But at age 22 he’s trying his best to patch things up and lead the family life with his girlfriend Sophina (Melonie Diaz) and their toddler daughter Tatiana, better known as T (Ariana Neal). Oscar is especially tender with his little girl, and relates warmly to his in-laws.

But his closest relationship is with his mother Wanda (actress/co-executive producer Octavia Spencer), the only one in his family who really stands up to Oscar — as when, in flashback, she refuses to visit him in prison after he scuffles with a fellow inmate in the visiting room. It so happens that Wanda’s birthday is on New Year’s Eve, and Oscar is intent on giving her a fine party. It is also Wanda’s suggestion that rather than driving into San Francisco for the festivities, Oscar and Sophina should take BART.

Fruitvale Station wasn’t screened much in the US before this week’s commercial release — it won prizes earlier this year at Sundance and Cannes, and had a special showing last month at the Grand Lake Theater — and yet there’s one scene that has already attracted some heat. On the last afternoon of his life, Oscar visits Farmer Joe’s market in Oakland, partly to buy some crab for the birthday dinner gumbo and partly to lobby his former boss, who fired him for being late to work once too often, to give him another chance and rehire him. While there, he strikes up a conversation with a pretty blond customer named Katie (Ahna O’Reilly). She has never fried fish before, and Oscar offers advice. The exchange is friendly, flirtatious, and low-key. In another movie the chance meeting between a bruised-but-hopeful young black man and an open, seemingly guileless young white woman might have led to any number of plot developments. Here, Oscar and Katie’s encounter appears to be the calm before the storm.

Nothing further happens, and yet some viewers (including people who have obviously not seen the movie) have objected that Katie is a made-up character and thus has no relevance to Oscar’s story. The character has every relevance, both as a grace note to indicate Oscar’s frame of mind on the verge of leaving this world, and as a sign of hope, a possible bridge between races in what is essentially a crime story about racial misunderstanding. Later that night on BART, when Katie coincidentally spots Oscar again and calls out to him minutes before he is gunned down, it seems at first to be a clumsy device. But we come to realize that Katie represents Oscar’s one last fleeting chance for a new beginning. The chance whistles by and is lost forever. But we remember it.

Coogler, a Richmond-based filmmaker whose day job is as a youth guidance counselor at San Francisco’s Juvenile Hall, treats the sad tale of Oscar Grant with delicate dignity and even a trace of ironic humor. Oscar and Sophina’s New Year’s Eve skylarking night on the town, the packed BART car full of partiers, Oscar’s confrontation with an old adversary and the subsequent fight that empties out onto the platform and the jittery BART police — it all passes in a blur, like a recurring nightmare.

We feel we get to know Oscar, but what’s the story behind Johannes Mehserle, the BART policeman tried and convicted for his death? We never find out. According to Coogler, Mehserle refused to sign an agreement with the production. And so his character was fictionalized as a monster, a hard-charging stereotype of the trigger-happy cop, scared to death and armed to the teeth.

We asked Coogler whether any of the attitudes and conditions that led to Oscar Grant’s death have changed. “You look at places like Oakland, where there are officer-involved shootings,” Coogler said in a phone interview. “We should look at where the officers are from. Mehserle was from Germany. He lived in Sonoma. People look at other people in these situations as someone who is different. It’s the dehumanizing factor. Gangs do it, and it’s the same thing with police. You’re not looking at them as human beings. If you come from an area where you have no interaction with African Americans, you’ll look at them differently. If someone doesn’t know any African Americans, how [is he] going to behave?”

Fruitvale Station is built to prompt questions. A quick lesson in what it means to be “underclass,” “ghetto,” poor, profiled, under suspicion, etc., it’s a violent gloss on Peter Nicks’ equally provocative documentary The Waiting Room. In a world of never-failing justice, a police officer who is sitting on a prone suspect whose hands are cuffed behind his back, who then shoots that suspect in the back and kills him, should serve more than eleven months in prison. Oscar Grant never reached his dream. It’s up to us now.