The creation of an "outlaw" pop star. 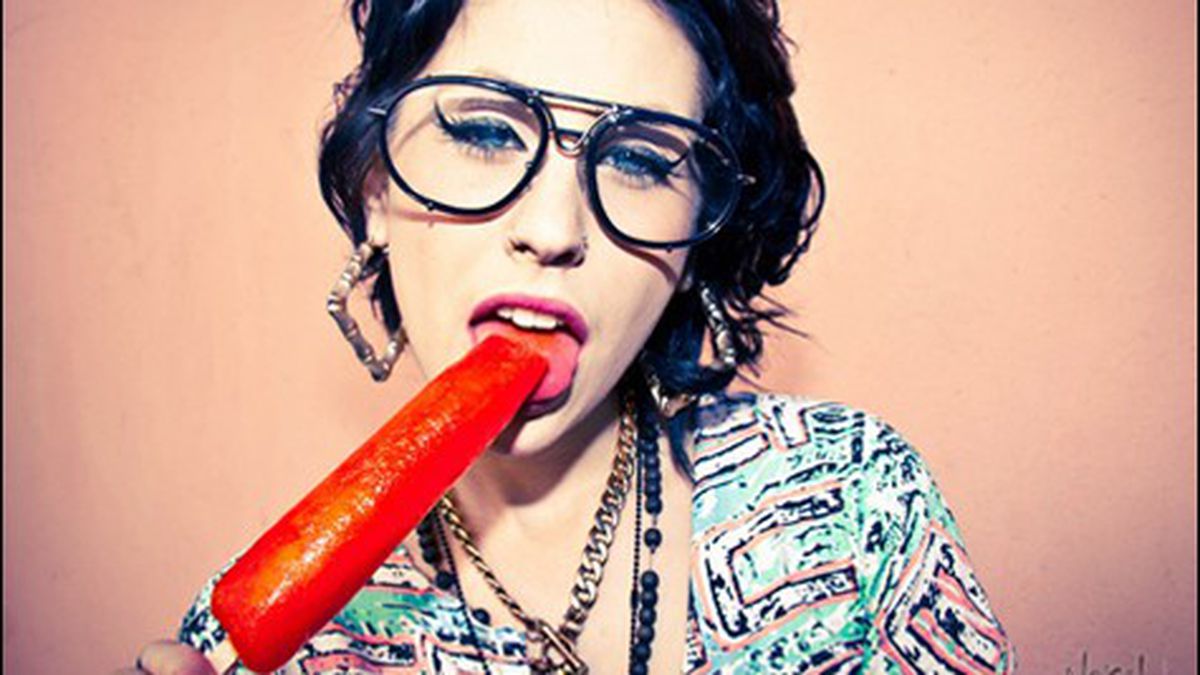 Until Memorial Day, few people had heard of Oakland’s newest break-out rap star, Natassia Zolot — aka Kreayshawn. Then, overnight, her fortunes changed with the success of the YouTube music video “Gucci Gucci,” which now has well over three million hits (and may hit four million by the time this article goes to press). It caught the eye of Mark Williams, the senior vice president of A&R at Columbia Records, who signed Kreayshawn to a record deal immediately. And it metastasized in the blogosphere, prompting music writers to question everything about Kreayshawn, from her biography (Did she really grow up in East Oakland?) to her sexuality (Raging lesbian? Occasional lesbian?) to her street cred (White girl rapper? Excuse me?). Conspiracy theories proliferated: Maybe Kreayshawn was really a performing arts student at some fancy liberal arts college, and her act was a contrived statement about authenticity in hip-hop.

But the Kreayshawn of “Gucci Gucci” is much more complicated than what’s been portrayed so far. It’s true that this “outlaw” pop phenom was consciously created, but the real Kreayshawn is not so disconnected from the image she projects on YouTube.

She really did grow up in San Francisco’s Tenderloin and the San Antonio neighborhood of East Oakland, really did drop out of four high schools (MetWest, Oakland High, Alameda High, and a continuation school called Island High, although the last two were in Alameda), really did talk her way into a full scholarship at Berkeley Digital Film Institute, only to drop out of that, too. She really does refer to her friends Vanessa Reece — aka V-Nasty — and Jordan Capozzi — aka L1L D3BB13 (Lil’ Debbie) — as “those bitches.” And according to both Williams and her manager, Chioke “Stretch” McCoy, she developed “organically,” partly because — in Williams’ words — she had a “fresh, genuine approach,” and partly because — in Stretch’s words — she addressed a certain need that wasn’t being met in hip-hop.

They have a point: Kreayshawn found a niche, it’s wide, and she owns it. She’s catchy. She’s “‘hood.” She grew up in an alleyway, in a neighborhood oft-nicknamed “Murder Dubbs.” Her mother was a punk rocker. Her father was supposedly a pro skater, though Kreayshawn isn’t quite sure, since she’s only met him a few times. (She’s heard he clicks on the “Gucci Gucci” video every day, a gesture that’s “sweet in a sick way,” she said.) She shops at Thrift Town — or used to, at least — wears a Minnie Mouse headband and doorknocker earrings, dons enough mascara to get the faux pin-up look of Bettie Page or Amy Winehouse. She’s reasonably attractive without being a sex symbol (unless you count all the speculation about her quasi-lesbian lyrics). She came up hard, but comes in a package that’s not threatening to Middle America. And, most importantly, she appears to be self-made.

“I think you can’t get more real than what happened to her,” Williams said. “She and her friends got together, they found a guy to make a beat, they made a video, and they put it up on the web. All of that happened as completely natural as you could possibly be.”

But even the most natural rags-to-riches story couldn’t be executed without a little engineering. On closer inspection, the Kreayshawn myth does, in fact, resemble the timeworn stereotype of a producer-manufactured female pop star, albeit with a few twists. Kreayshawn was about twenty years old when she was discovered by Stretch, who became her de facto Berry Gordy. At the time, she was shooting a video for one of his clients, another Oakland rapper named DB Tha General. She had recorded a couple tracks in her bedroom, set a few Facebook “collage videos” (mostly of parties with her friends) to music, and taught herself how to use iMovie. She was starting to build a music video portfolio via Berkeley Digital Film Institute. For the most part, Kreayshawn had her heart set on being a visual artist. Even when she moved to Los Angeles four months ago, her ambition wasn’t to jump-start a hip-hop career, but to make friends in the film industry. “I was gonna do some handy work on set,” Kreayshawn said during a recent phone interview. “I was actually like on a whole different note when I was moving out here.”

But Stretch saw something else in Kreayshawn. When he first heard one of her home-produced mixtapes — called Hoes on My Dick — he saw the potential for stardom. “She’s one of those girls that all the guys want to be with, and all the girls want to be around her,” he explained.

So it was at his behest that Kreayshawn decided to pursue music, in conjunction with all her other disparate interests. “I was, like, ‘Oh yeah, fo sho,'” Kreayshawn recalled, absently remembering the day that she decided to call Stretch on a lark. “I was really high, sitting in my room, and I ended up hitting him up.”

Stretch then did with Kreayshawn what he would have done with any other emerging music talent. He put her on bills with more established artists, like Mistah FAB, J Stalin, and Roach Gigz. He brought her along to South by Southwest as an opening act, even though she wasn’t on the bill. He had her open up a J Stalin show at The Catalyst in Santa Cruz. He took her to Nexus Recording Studio in East Oakland, where she cut “Gucci Gucci” in about a day — Stretch says that Kreayshawn announced on Twitter that she needed beats, and quickly found one from a Staten Island DJ named Two Stacks. (With its droney studio effects and kitty “meow” samples, it’s clearly a large part of the song’s success.) Then Stretch leaked her music to hip-hop radio DJs, like Carisma of Power 106 in New York, and Amen of the popular local station KMEL. Amen and KMEL station director Big Von tacked Kreayshawn onto this year’s “Freshmen 10” list of the Bay Area’s hottest aspiring rappers. A last-minute No. 11, she was the first woman to ever make the list.

What Stretch didn’t really anticipate was the explosive controversy that would surround his artist, within minutes of her first major star turn. A couple weeks after “Gucci Gucci” went up, Kreayshawn became one of the most over-exposed stars on the Internet, and the subject of several competing narratives. Some people wanted to turn her into a gay icon, even though she denies being gay or bisexual. Others wanted to frame her as the feminist, working-class hero of a kind of Horatio Alger story. Others argued that her whole act was a form of minstrelsy or cultural appropriation. A particularly damning critique in the online magazine Clutch pointed out all the ways that Kreayshawn exploits race stereotypes, from her slang words, to her blunts, to her black-male entourage (which features several guys from the popular Los Angeles rap crew Odd Future). Many argued that Kreayshawn’s skin color was the only reason she got a record deal so fast — that there are plenty more deserving rap artists from East Oakland who we’ll never hear about.

Rather than hide from these debates, Kreayshawn often stoked them. She christened her three-woman crew “The White Girl Mob.” She vehemently defended V-Nasty, whose persistent use of the N-word has been the source of a lot of hand-wringing. (V-Nasty grew up in the projects and reportedly went to jail for armed robbery. She’s the kind of white girl you wouldn’t want to meet in a dark alley.) As for the gay thing, she describes herself as “a free-spirited person,” and says she’ll do what she wants and who she wants, when she wants.

Perhaps that’s why people like her. Kreayshawn is not the best rapper to ever come out of Oakland, but she’s certainly one of the most interesting in that she bumps against all our bedrock notions of what race and gender are supposed to be. More importantly, she’s an enigma, and that seems to be what we’re looking for in hip-hop these days. Ten years ago, we wanted extreme representations of black masculinity, i.e. Jay-Z and Fifty Cent. Today we want young provocateurs like Kreayshawn and Odd Future frontman Tyler the Creator — people who present themselves as being outside the mold, even if they’re lodged firmly within a tradition.

On that note, much has been made of the anti-consumerist bent of “Gucci Gucci” (the hook goes Gucci Gucci, Louis Louis, Fendi Fendi Prada/Basic bitches wear that shit so I don’t even bother) although the outcome of that song — a lucrative deal with Columbia — indicates that Kreayshawn isn’t actually against consumption. Berkeley Film Institute dean Patrick Kriwanek, who awarded Kreayshawn the $40,000 scholarship for a program she didn’t finish, couldn’t help but express reservations. “She’s a brilliant child for someone so young,” he said. “But I’m concerned that she’s surrounded by the right people, in terms of handling all this money that’s coming in so fast.”

His concerns may not be entirely unfounded, considering another oft-quoted lyric in “Gucci Gucci”: I’m lookin’ like Madonna, but I’m flossin’ like Ivana.

Previous ArticleHigh ‘Up’: ‘What’s It’s Like’ Selling Pot At Seventy