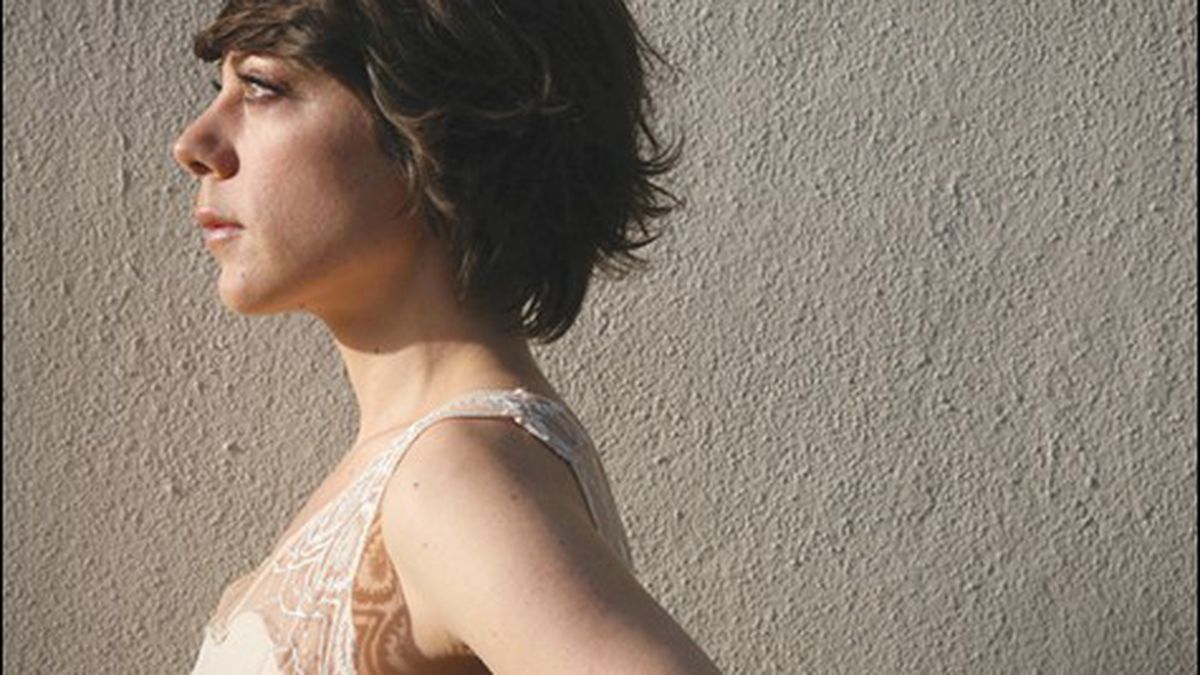 She may sport four-inch stilettos and shimmery evening gowns, but Gretchen Parlato is a far cry from the traditional female jazz vocalist. She’s a hipster with a signature look: fauxhawk hairstyle, big earrings, dresses that fall off the shoulder. She regards audiences in such a disaffected manner that it’s surprising to meet the singer in person and find out she’s actually affable. Doralice, I told you well/To love is foolishness, Parlato said, addressing her audience at Swedish American Music Hall in a flat, emotionless tone. The singer was translating Portuguese lyrics from Antonio Carlos Jobim’s ballad “Doralice,” which has become one of her biggest hits. Like most of Parlato’s material, it’s about a relationship gone wrong.

“So maybe I should just live alone and play my guitar,” she said, paraphrasing the last two lines. That drew laughs from the audience, not because of the lyrics, but because of the deadpan way that Parlato delivered them. She didn’t crack a smile. A woman in the back row cringed. “It’s like she’s clowning us,” the woman said.

Not that it mattered. Any fan of Parlato’s 2009 album, In a Dream, which came out on the small, worldish jazz label ObliqSound, will tell you she’s the best thing to happen to jazz since Esperanza Spalding’s ’06 debut. (Not surprisingly, Spalding and Parlato often record together, and shout each other out in their liner notes.) She took first place in the 2004 Thelonious Monk International Jazz Vocals Competition, which makes her one of the best young jazz singers in the world. Specializing mostly in Brazilian styles, Parlato approaches her medium with a drummer’s sensibility. She adorns many songs with cluck-and-click vocal percussion, the way a traditional vocalist might do a scat solo. She claps out an asymmetrical rhythm for the chorus of Herbie Hancock’s “Butterfly.” She comes up with weird, hyper-modern arrangements of old standards — like Wayne Shorter’s “Juju,” or Miles Davis’ “Blue in Green” — and makes them sound completely unfamiliar. At points, even her breath seems musical.

Such was the case during Friday night’s performance at Swedish American, for which concertgoers shelled out $30 apiece to catch a glimpse of New York’s latest hot-jazz-star-du-jour. Parlato came fourth on a bill of “soulful singers” at this year’s SFJAZZ festival, which also included local favorite Meklit Hadero and country crooner Rosanne Cash. Swedish American is a rather odd place to see a jazz show, with its high, wood-beamed ceilings and folding-chair seating. But the sound carried reasonably well, filtered through two large monitors on either side of the stage.

A year of constant touring has allowed Parlato to develop a formula for her set. She performs with a trio of fairly young musicians: bassist Alan Hampton, drummer Kendrick Scott, San Mateo native Taylor Eigsti on piano (or Rhodes, as was the case at Swedish American). When she’s playing in Northern California, she always introduces Eigsti as “a celebrity in these parts.” Otherwise, her between-song banter is tepid to nil. She doesn’t even look at her audience most of the time. Rather, Parlato closes her eyes and stands in one place, bobbing her head and swaying from side to side. For most songs, she taps a beat on the microphone stand with her right hand. During solo sections she’ll turn around and gaze at whoever is soloing, which means that audience members often spend half the show watching Parlato in profile. That was a bit frustrating, owing to the fact that her hair covers the left side of her face, which is the one that faces the audience.

Over time, Parlato will learn how to have better stage presence. The singer clearly has it in her. Half the videos on her MySpace page show Parlato in character — she does a running gag as a menopausal spinster named Helen McKenzie. She’s also good at quipping. At this year’s Monterey Jazz Festival, Parlato introduced herself as a native of Los Angeles. When people clapped, she seemed affronted. “Are you clapping because you’re from LA?” she asked. “Or because you just like LA?”

If Parlato does suffer from stage fright, she hides it very well. So maybe the best explanation for her relatively sedate performance is that she’s concentrating too hard on the music, and not enough on the show.

And perhaps that’s a good thing. Whether live or recorded, Parlato has one of the most distinctly beautiful voices in contemporary jazz. She hovers in a two octave range, but her intonation is so careful and delicate that every line gleams. “There was a song that played on the radio all the time in 1992,” Parlato said, as an introduction to her cover of the SWV hit, “Weak.” “It got stuck in my head,” she continued, before nodding to Scott, who began snapping a drum pattern with his fingers. Within a couple bars, he had the whole audience snapping along. Parlato smiled. I don’t know what it is that you’ve done to me, she sang, slurring out words that should be ingrained for anyone who listened to urban radio in 1992. The arrangement, co-written with pianist Robert Glasper, turned a swoony ballad into a gospel song.

Parlato closed her eyes and moved her arms back and forth, like someone working at a pottery wheel. She shut the audience out altogether. But nobody seemed to mind.

Mochi Donuts, a Force for Good

The Rise of the Republican Woman