.The Fight to Develop West Oakland

As anti-gentrification groups intensify their protests of the city's major redevelopment plan for the area, are fears of displacement warranted? 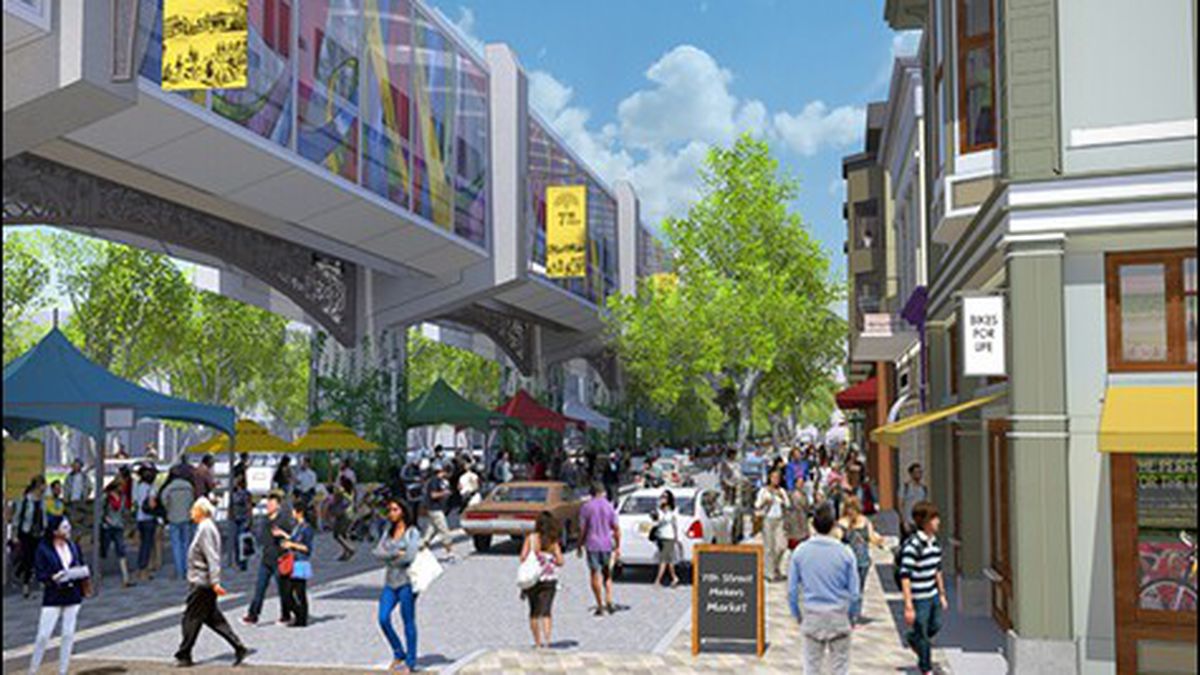 “It just literally made that an uninhabitable area,” said Art Clark, a West Oakland native, referring to the BART tracks. The lack of basic services in the neighborhood, he said, is a lasting reminder of the destruction wrought by these infrastructure projects. “You still can’t find a bank in West Oakland. You still can’t find more than a couple of grocery stores … the kind of things that people take for granted.”

For the past three years, Clark has been working on a strategy to change this situation. As a project manager with the Oakland-based architectural and planning firm JRDV Urban International, Clark has been collaborating with city officials on the creation of the West Oakland Specific Plan (WOSP), which the Oakland City Council is scheduled to vote on this month. “West Oakland should no longer be ignored,” said Clark. JRDV is the lead consultant for the WOSP and has been working on the plan since July 2011.

The plan provides a blueprint for growth in the neighborhood with the goal of attracting investments to West Oakland, primarily through the development of vacant and underutilized properties and sites. It includes recommendations for targeted zoning changes and development objectives specific to four so-called “opportunity areas” — 7th Street, 3rd Street, San Pablo Avenue, and Mandela Parkway/West Grand Avenue.

But over the last month, the plan has sparked intense backlash from a group of activists who argue that its passage will speed up gentrification in West Oakland at the expense of long-time, low-income residents. The WOSP, critics say, does not include strong enough affordable-housing and local-hiring mandates and fails to provide effective protections for existing residents. The fear is that as West Oakland gentrifies further, the influx of market-rate housing will indirectly displace poorer residents, pricing them out of the neighborhood. The opposition escalated at a June Oakland Planning Commission meeting in which commissioners voted to approve the plan. Activists circulated flyers that day encouraging opponents to “vandalize developments and gentrifying businesses,” and a few hours after the meeting ended, two people in masks threw concrete into the windows of Kilovolt Coffee, a new West Oakland business.

With protests such as this likely to be repeated, are the fears of gentrification and displacement warranted? Supporters of the plan argue that the backlash is misguided and that the implementation of the WOSP will bring much-needed economic revitalization to West Oakland while helping to preserve existing residential communities. They further argue that an increase in the housing supply will help keep prices down in the city — and that development is inevitable in West Oakland, since it’s the closest East Bay neighborhood to San Francisco and the geographical center of the Bay Area. In this way, WOSP proponents say, a comprehensive plan such as this one allows the city and its community partners to craft a detailed vision that lays out specific preservation guidelines and other means to mitigate harms associated with gentrification. The WOSP does not propose any direct displacement of existing housing.

“We want to preserve these neighborhoods and ensure that people can stay in the places they grew up,” said Rachel Flynn, director of the city’s planning and building department. “We have a lot of past errors to make up for,” she added, citing previous urban renewal projects. From the start, “it was not a project about changing the character of the existing housing areas,” said Morten Jensen, a JRDV principal. He and Clark recently showed me video renderings of the WOSP’s types of higher-density developments at specific, currently underdeveloped, areas.

The plan establishes a target of bringing nearly four-million square feet of new business and industrial space to the neighborhood and opens the door for a major commercial, office, and retail development around the West Oakland BART station. This project, called Transit Village, is expected to move forward soon after the passage of the WOSP. The plan also calls for the creation of roughly 22,000 new jobs in the area, as many as 2,300 new housing units surrounding the BART station, more than 1,350 new housing units within mixed-use developments along commercial corridors, and up to 1,330 new housing units in certain residential locations.

In addition to the nearly five-hundred-page land use plan, the city has produced a companion environmental impact report (EIR). If the council approves the WOSP, it will enable and encourage developers to advance projects in the neighborhood that align with the plan. That’s because the existence of an EIR means a significant and expensive part of the mandatory public review process for new developments will already be completed; the EIR will also allow developers to apply for certain federal grants, including ones that support affordable housing.

But while the WOSP recommends reserving 15 percent of new units built between now and 2035 for low and moderate-income households, the plan has no affordable housing requirements or quotas and fails to introduce new tenant protection measures or specific community benefit agreements. For this reason, opponents argue that indirect displacement seems very likely as profit-driven developers flock to West Oakland. Just Cause/Causa Justa, an Oakland-based housing rights organization, argued in comments it recently submitted to the city that the plan’s affordable housing strategies are too general, poorly researched, and largely excluded from the implementation portion of the WOSP.

And while West Oakland currently has about 3,200 restricted affordable housing units, the neighborhood population is uniquely vulnerable to indirect displacement. That’s because, as the WOSP notes, renters make up 78 percent of neighborhood households, compared to 58 percent citywide. Displacement can result from building owners choosing to convert rental properties to condominiums, or landlords raising rents on existing tenants in response to increasing market values.

But Zac Wald, chief of staff for Councilmember Lynette Gibson McElhaney, who represents West Oakland, pointed out that the WOSP is designed to be a neighborhood land use plan — not a citywide social policy plan. “The goal of a specific plan is to provide land-use direction,” he said. “And most of the land use moves in this plan are designed and intended to protect the existing industrial area and to protect existing single-family neighborhoods … and to develop the vacant lots around the BART station.”

Wald said that the council should use citywide policies and programs to address concerns about rising rents and displacement. He and Flynn both cited an ongoing push to implement an affordable housing “impact fee” policy that would enable the city to charge developers building market-rate housing. Flynn said the city is studying the fee now and could adopt a policy as soon as early 2015 — so that it would likely apply to new WOSP development projects.

Regarding the call for specific affordable housing mandates within the WOSP, Flynn added, “you can’t just say this neighborhood is going to have requirements and this neighborhood next door is not. … Developers will do the math.” And without new development to address the city’s housing shortage, Flynn continued, “prices are going to go up and that’s all there is to it.”

Data show that West Oakland housing prices have climbed rapidly in recent years, while new development has lagged behind. Property prices in West Oakland increased by about 46 percent between 2009 and 2010, according to the WOSP. And according to a report Flynn provided, there are roughly fourteen major housing projects currently under construction or recently completed in Oakland, representing a total of more than 1,000 units; of those, roughly 85 percent are considered affordable.

But John Protopappas, president and CEO of Madison Park Financial Corporation, an Oakland-based real estate and development firm, said that Oakland only has a relatively small number of market-rate units currently under construction while San Francisco and San Jose have thousands and Emeryville has hundreds in the works.

“For the longterm health of the city, it’s not good. We are just not providing the housing that the region demands,” Protopappas said. One of his projects, Lampwork Lofts, a converted West Oakland warehouse with 92 market-rate units, opened its doors last week. Passage of the WOSP, he said, would give developers a level of certainty that would encourage them to undertake similar projects.

Some research has shown that the influx of higher-income residents is not necessarily a bad thing for existing lower-income residents, as is the common narrative of gentrification. A 2008 study from the University of Colorado and Duke University analyzed data from more than 15,000 US Census tracts and found no evidence that minorities left gentrifying neighborhoods in the 1990s at disproportionate rates (compared to similar low-income areas that did not gentrify). The study further found that the average income of a black household in which at least one of the adults holds a high school diploma increased at least 20 percent more in gentrifying areas than in non-gentrifying neighborhoods. “Gentrifying areas were particularly attractive to middle-class black families,” said Terra McKinnish, associate professor of economics at the University of Colorado and co-author of the study.

Some longtime West Oakland residents who have participated in a number of the city’s neighborhood redevelopment efforts over the years said they are eager to see new projects completed. “There’s been a cry for more services for years,” said Jabari Herbert, a West Oakland resident since 1997 and a developer involved in the Transit Village project. He said the final development would include homages to the African-American cultural history of 7th Street. “We are trying to restore the injustice that was done to the black community here in West Oakland.”

Monsa Nitoto, a 65-year-old West Oakland resident who has lived in the neighborhood for nearly fifty years, said he is also anxious for Transit Village to break ground: “I need to see this project completed. … If my generation dies out and we don’t get something set up there, it’s going to be a forever miss.”