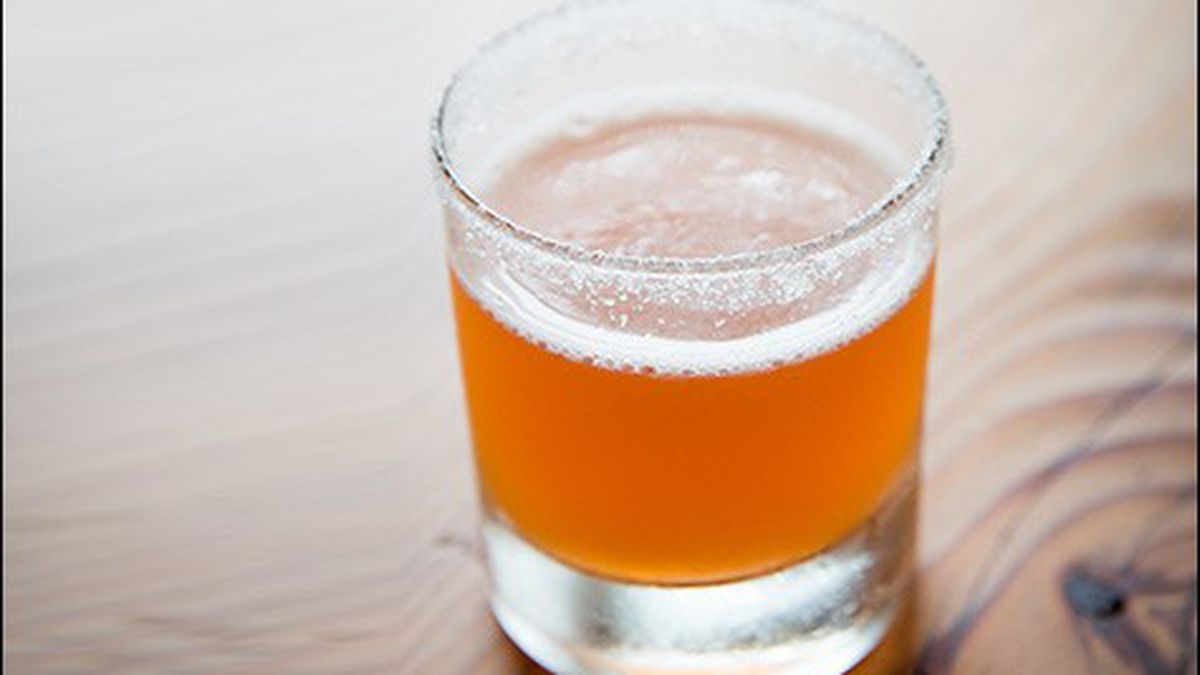 Around the East Bay, bartenders are concocting special drinks for summer’s sun-drenched days. Carefully made, often with handmade or garden-grown ingredients, these summer bracers are refreshing and perfectly suitable for day-drinking.

Boozy in flavor but light in spirit, the Town Cup at Oakland’s Chop Bar makes for easy drinking in the daylight hours. With a base of Pimm’s No. 1, a gin-based liqueur, it gives you the slightest buzz, so you can drink plenty of them and still carry on a civilized conversation. “Our guests have called it ‘summertime in a glass’ and frequently ask us to serve it by the pitcher, but we have yet to indulge,” said Chop Bar’s head bartender, Min Lee.

A riff on the Pimm’s Cup — a classic British cocktail traditionally imbibed at high-society events — the Town Cup is “not just pleasing to the person, but [to] the Town,” said Lee, who was raised in Oakland. The restaurant does Pimm’s-based cocktails throughout the summer, creating a different one each month. The Town Cup features Pimm’s No. 1 infused with fennel, cucumber, citrus peels, ginger, and cardamom. Mixed with plenty of orange and lemon juice and garnished with cucumber, the drink has a citrus-punch quality — “it tastes familiar, but you can’t quite pinpoint what’s there,” said Lee.

At Camino, in Oakland’s Grand Lake neighborhood, “the bar is an extension of the kitchen — though we use a bit more alcohol,” said bar manager Tyler Vogel. The restaurant’s drinks are minimal and sophisticated, much like its food, but the relationship doesn’t stop there, because bartenders use surplus and leftovers from the kitchen — in the case of its current Tequila Drink, the leavings from candying grapefruit, which are cooked into a syrup. “It’s just a lot of good flavor that would go to waste otherwise,” said Vogel.

The syrup, fabulous and bittersweet, is a byproduct of grapefruit peels that have been simmered in water and sugar. Vogel mixes it with white tequila and a touch of lovage, a savory herb with the potency of flat-leaf parsley, the aroma of curry, and a distinct celery flavor. Gum syrup is added as well, lending the drink a soft weight. The result is clean, crisp, and a little sneaky — refreshing enough to make one forget tequila’s numbing capacity. But the drink’s subtleties are better appreciated if you keep your wits; as the lovage steeps, its aromatics haunt the tip of the tongue.

At the Hotsy Totsy in Albany, subtlety is not an apt descriptor for El Matador, whose heat knocks you flat on your back. “It’s the kind of drink that doesn’t last that long,” said bar owner Jessica Maria. “Your mouth gets hot so you want to cool it down, but the thing cooling it down is what’s keeping your mouth on fire. It doesn’t stand a chance sitting there.”

The drink is a capsicum triple threat inspired by Maria’s time in Thailand, where sweat-inducing, spicy soups are used to cool the body during hot weather. House-made Sriracha salt is the first assault of heat. Savory with garlic, and pleasantly peppery, it rims a glass filled with ice, Hangar One’s roasted chipotle vodka, and Ancho Reyes, an obscure, Mexican chile liqueur. Cooling cilantro, lime juice, and agave syrup balance out the heat. It’s a drink that lands with a kapow on the tongue, hitting all points of the palate — sweet, spicy, savory, salty, and bitter.

Like El Matador, Pizzaiolo‘s Mind Your P’s and Q’s also hits the five basic tastes. Like many garden-focused bartenders, Pizzaiolo’s bar manager Kate August makes shrubs — sweet-and-savory syrups made with fruit, vinegar, and sugar — during the summer. Strawberries are one of the first fruits to come into play when the warm weather hits, so August made her first shrub of the summer by macerating farmers’ market strawberries in sugar, which extracts the fruit’s juices. Maple sugar gives it a molasses-like quality, and apple cider vinegar offers a sharp acidity.

“I haven’t heard of a spirit it doesn’t go well with,” said August. Mind Your P’s and Q’s also contains aged rum, velvet falernum, and a chile tincture made by steeping chile de arbol and home-grown Serrano chilies in moonshine. The glass is rimmed in sugar and salt, giving you s salty, sweet, spicy and very pungent acidic roll on the tongue. “It reminds me of eating a watermelon with salt and chile in it,” said August

According to August, the drink got its name because “it just seemed appropriate.” And it’s true, there is stern, bold, almost schoolmarm-ish quality to the drink, mellowed by a creamy strawberry sweetness.

At the Piedmont Avenue bar Adesso, you can still taste spring’s rhubarb in the Somersault, a rum-based cocktail that uses a house-made rhubarb shrub. The shrub — made of rhubarb stalks, sugar, and champagne vinegar — is a demure shade of pink, delicate and vegetal on the nose, and creamy and sweet on the tongue. It provides an earthy foundation for rum. Shaken with mint and lime, it’s citrusy and straightforward. “It’s something you can drink on a front porch, like iced tea or lemonade,” said Adams.

Over at Flora in Oakland’s Uptown, the Prohibition-style bar’s Blueberry Fix is the summer cocktail to try. Like a fruity mint julep, it uses a dense blueberry syrup, brightened with vinegar.

However, it’s the sweet, silky vodka used in the drink that takes center stage — Zu Vodka, from Poland, is infused with sweet-smelling bison grass grown in Bialowieza, a carefully protected forest in Europe. “They call it a primeval forest. It’s like walking in fairy land,” said Joseph Delgado, Flora’s general manager. Hundreds of bison roam free here — only a small number of families are permitted to harvest the sweet-smelling grass. The vodka itself is smooth — no medical-grade astringency here — and tastes of vanilla, with a floral scent. For the fix, the vodka is mixed with blueberry syrup, with plenty of crushed ice.

2-3 lovage leaves (torn), plus one for garnish

Mix ingredients in a shaker with ice, strain, and pour over ice. Lightly press the lovage leaf with your fingertips and rub the rim of the glass; garnish with the leaf.