Piercing the Book Bubble: Litquake celebrates 23 years of bringing literature to the people 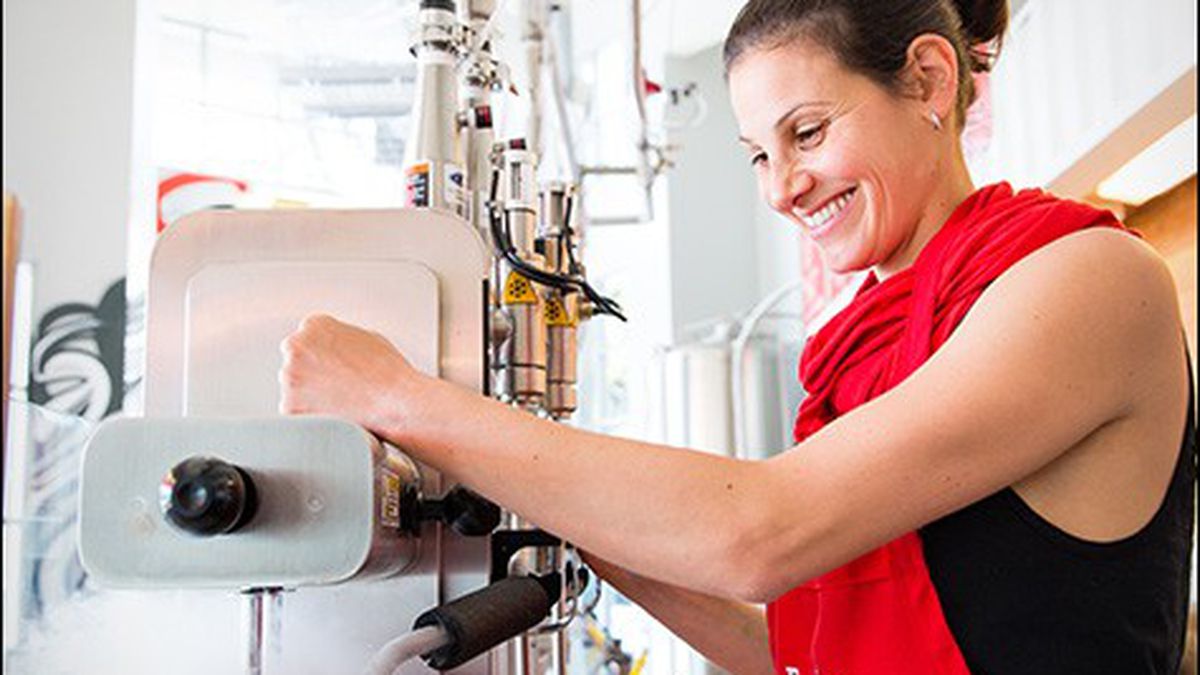 At the newly opened Rockridge outlet of Smitten Ice Cream (5800 College Ave., Oakland), the ice cream isn’t scooped from the tub, ready-made, like it is at almost every other ice cream parlor in the world. Instead, each serving is frozen and churned to order using the company’s patented, liquid nitrogen-fueled “Brrr” machines, so that customers can watch, wide-eyed, and snap photos with their smartphones as fresh ingredients are transformed into an immaculate scoop within minutes — all amid wisps of fog that bring to mind a David Copperfield trick or chemistry lab experiment.

Is this frozen dessert, as prepared by our robot overlords? Not quite. Despite the high-tech gadgetry, Smitten founder Robyn Sue Fisher said the ice cream she serves actually isn’t so different from the kind your grandmother might have made on the family farm — that, in fact, it’s a throwback to a time before ice cream became a mass-produced commercial product that was pumped full of artificial stabilizers and preservatives. Just pure, wholesome ingredients, prepared fresh.

Fisher likes to talk about how Smitten is the “new old-fashioned” — how her shops (in addition to Rockridge, she has one in San Francisco, another in Los Altos, and one opening in Lafayette soon) bridge the gap between the traditions of the past and the technological innovations of today. As it turns out, that’s a popular theme in the high-end artisanal ice cream world. In the East Bay, four new ice cream and gelato shops — Smitten Ice Cream and Curbside Creamery in Oakland, CookieBar in Alameda, and Caravaggio Gelateria Italiana in Berkeley — all straddle that line: between old ways and new, between childhood nostalgia and a tinkerer’s optimism.

Smitten’s genesis story has been well documented at this point: Fisher, a Stanford MBA, recruited a team of engineers to create a machine specifically designed to churn ice cream made with liquid nitrogen, and she peddled her frozen wares from the back of a little red wagon for more than a year before opening the first brick-and-mortar Smitten shop, inside of a repurposed shipping container in San Francisco’s Hayes Valley neighborhood.

Making ice cream using liquid nitrogen isn’t anything new — high school chemistry instructors have long been doing demos. But, according to Fisher, it had always been done for theatrical effect, not because anyone thought the resulting product could compete with traditional ice cream based on its culinary merits. Fisher was convinced that liquid nitrogen, which enables freezing at a lower-than-normal temperature — negative 321 degrees Fahrenheit, to be exact — would yield a smoother product because it would allow for the creation of smaller ice crystals. And the quick-freezing process allows her staff to make individual portions of ice cream to order, which is both a novelty and a luxury.

But is it more than smoke and mirrors? At the Smitten location in Rockridge, a single scoop will run you at least $4.75, which, to a skeptic, might seem insanely expensive — especially since the store lacks many of the niceties that customers normally expect from an ice cream shop: Due to the logistics of the equipment, you can’t sample flavors before ordering, or get scoops of two different flavors on a single order. (To assuage customers, the store offers a “100-percent Smitten guarantee” to replace any flavor you don’t like free of charge, although this doesn’t appear to be widely promoted.)

While the texture varied from flavor to flavor, the best of Smitten’s ice creams — the 60.5 percent bittersweet chocolate, in particular, which was as thick as good European drinking chocolate — really were some of the smoothest and creamiest I’ve tasted. Fisher argues that because the technology allows her to avoid using unnatural preservatives and emulsifiers to increase shelf life, Smitten’s ice cream is that much fresher.

“We are making old-fashioned ice cream,” Fisher said. “We, just like grandma, focus solely on taste. We don’t have to make those compromises.”

Victoria Wentworth, whose Curbside Creamery (482 49th St., Oakland) will open in Temescal Alley in early June, said she positions herself as more of a traditional, “backwards-looking” ice cream maker, although if you’ve seen her around town you probably already got that sense: She’s been selling ice cream sandwiches from a custom-designed trike, and her shop is located at the hub of all things old-timey in Oakland. More to the point, though, Wentworth said the one part of the recent gourmet ice cream movement that has turned her off is the obsession with crazy flavors — with savory ice creams and off-the-wall ingredient combinations.

“People in my generation who were really into the novelty flavors, they’re having kids now,” Wentworth said. Now, friends tell her, they go out for ice cream sometimes and their kids won’t like any of the flavors.

So, Wentworth said she wants to position Curbside as a kid-friendly ice cream shop — one that focuses on “classic,” nostalgic flavors, but with the improved quality of an organic Straus Family Creamery custard base. That said, Wentworth’s most adventurous flavor, Thai Iced Tea, is a knockout — the kind of flavor that makes so much sense once you taste it, you wonder why more shops don’t offer it.

But Curbside won’t be without its nods to modern food trends and dietary preferences: A significant portion of the shop’s inventory will consist of vegan ice creams and, eventually, vegan soft-serve, all made with cashew milk that Wentworth makes herself from raw cashews. For a neighborhood still mourning the loss of Scream Sorbet, she hopes to fill an important niche.

Opened last November on the West End of Alameda, CookieBar (1606 Webster St.) is the brainchild of Robert Feng and John Ngu, high school buddies and Alameda natives who wanted to bring a proper ice cream parlor to their side of town. The shop’s centerpiece is a build-your-own ice cream sandwich setup that will draw inevitable comparisons to Berkeley’s C.R.E.A.M. or to the SoCal institution Diddy Riese, which popularized the model. If you’ve been to either of those, you know the drill: Pick a freshly baked cookie (or two different cookies if you want to live on the wild side) and an ice cream flavor, and you’re good to go.

Thoughtfully, CookieBar provides customers with a paper cup, in preparation for the mess that inevitably ensues when the ice cream starts to melt, and a few counter seats where you can sit and enjoy your ice cream, so the whole experience doesn’t feel like an assembly line, as it sometimes does at C.R.E.A.M.

Feng, too, talked about CookieBar being a mix between the old and the new: The main ice cream that the shop carries is Thrifty’s, the old-school drugstore brand that grown-up customers might remember buying for a dollar — or even a quarter — per scoop back in the day. (Note: These ice creams are really sweet.) But the store also carries several flavors from Mitchell’s in San Francisco, which isn’t exactly “new,” but which makes more unusual flavors such as ube (purple yam) that appeal to today’s generation of adventurous ice-cream eaters. And within the next month or so, the shop will launch its newest creation: ice cream sandwiches made with house-made, jumbo-size French macarons.

In Berkeley’s Gourmet Ghetto, a new gelato shop called Caravaggio Gelateria Italiana (1797 Shattuck Ave.) looks for all the world like the kind of traditional gelato shop that you’d find in Italy — from the classic, understated flavors that highlight single ingredients (say, Turkish pistachios or hazelnuts from Piemonte) to the pozzetti, or lidded stainless-steel wells, used to store the gelato.

Caravaggio’s gelato has drawn praise from customers, some of whom say it’s the best they’ve tasted outside of Italy, but the truth is that this shop has also injected a bit of modern technology and food science to the art of ice cream — or, in this case, gelato — making. The shop is the brainchild of two Italian cousins: Emiliano Cecchetti, whose background is in physics and materials science, and Mauro Bernocchi, an architect. Cecchetti explained that his goal, when he first started learning how to make gelato, was to develop a more healthful recipe — one that would leave eaters feeling energized rather than weighed down. The solution: Caravaggio’s gelatos use a natural-occurring sweetener called Palatinose (aka isomaltulose), derived from beets and often used in energy drinks, instead of sugar. And, for the some 60 percent of adults who can’t digest lactose, Caravaggio’s gelatos are also lactose-free.

If ever there was such a thing as “guilt-free” gelato, this is it. And yet: The hazelnut gelato I tasted was delicious, an intense distillation of the flavor of the nut, with plenty of creamy richness. If you’re used to American-style desserts, though, Caravaggio’s gelatos are shockingly un-sweet — just a hint of sweetness, so the overall effect is very light and refreshing on the palate.

Cecchetti said the gelato shop isn’t a science project, and the vast majority of his and Bernocchi’s customers don’t even know their ice cream has no added sugar. At the end of the day, they’re doing things the old-fashioned way — grinding nuts into a fine paste using a stone mill, and soaking the vanilla beans in a long infusion. “It’s a combination of science and art, or artisanship,” Cecchetti said.

Which isn’t to say he isn’t still looking for ways to improve upon his craft. Cecchetti noted that gelato, as a viable commercial product, has only existed for one or two hundred years.

“Tradition is important, but it’s still a relatively young history,” he said. “I think a lot has to be written still.”