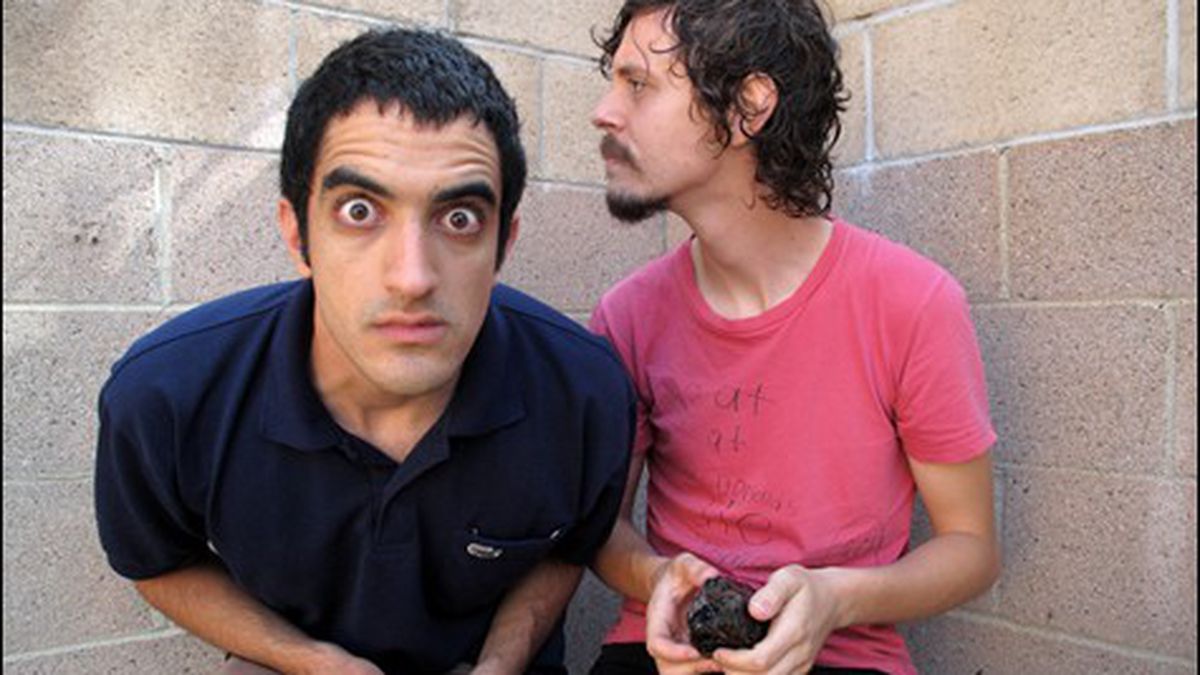 The Call of the Manicorn

From Tel Aviv to L.A. and now Oakland, the man behind experimental pop outfit Manicorn stops moving long enough to talk about his new album.

Fidgeting in a chair on a cafe patio, Eilam Wolman squinted at the table and suddenly blurted out a dizzying description of his music: “I play these power-chords, then fuck up, sing in gibberish, and beat-box a little. The funky bit ends, it turns into a Hawkwind song, and the keyboards come in.” Tall and wearing a gray trench coat, Wolman looks somewhat intimidating at first, but conversation reveals an artist fraught with frenetic and nervous energy.

Under the moniker Manicorn, Wolman translates his anxious mannerisms into rock songs as idiosyncratic as his personality. He just released his second album, We’re Manicorn, which is available for free on Bandcamp, and his description of his sound is accurate. Wolman’s vocal delivery veers from saccharine melodies to strangled yelps and nasal chants — often within one verse. The song structures are similarly fickle, but grounded in familiar rock instrumentation. It’s an eclectic style full of aesthetic risk, yet Wolman’s graceful navigation of disparate elements makes it compelling.

Wolman recorded We’re Manicorn in Oakland with former Gris Gris frontman Greg Ashley. He described his process, in particular documenting his vocal impulses, as “making sure something doesn’t work.” Recalling the session, Wolman said that “until we laid down the vocals and tied the song together, I don’t know that Greg thought I knew what I was doing.” Wolman isn’t delusional about his potential for alienating his collaborators — or his listeners — but in his short time living in the East Bay, he’s made an impression.

Wolman grew up outside of Tel Aviv. By age nine, he was hooked on performing, and got his start singing with local reggae groups. In 2008, frustrated with the lack of opportunities to play music in Israel, Wolman moved to Los Angeles. Wolman didn’t have any music contacts in the United States and wasn’t sure what part of the country would be most receptive to his aspirations, but the promise of free rent pulled him toward his aunt’s home in Los Angeles.

While there, Wolman never established a solid lineup for Manicorn, and recorded his first album with a drummer who quit by the time it was released. The eponymous debut, full of neurotic vocal delivery and rock appropriation, established the foundation for We’re Manicorn, but disjointed recording sessions hurt the album’s cohesion. “I recorded it in a garage in Highland Park, my garage in Venice Beach, my aunt’s garage, and some other garage in Culver City,” Wolman said.

Despite never assimilating into a particular Los Angeles scene, Manicorn garnered positive press, and perhaps its biggest endorsement came from Los Angeles-based pop musician Ariel Pink. After Wolman and Pink happened to meet, Pink praised Wolman’s demos, saying, “The Brill Building would have been all over this shit in the early 60’s.”

Still, Wolman never established a consistent lineup and floundered as a solo artist. “Everyone goes to LA to get some project going and then they’re stuck in traffic all of the time,” he said of the experience. Fed up, Wolman decided to move to Oakland and record his follow-up album with Ashley last summer. But then the lineup he secured for the record dissolved two weeks before the trip. He found drummer Roy Chen just before leaving Los Angeles and, after one rehearsal, they hitchhiked to Oakland to record We’re Manicorn.

Among the highlights on We’re Manicorn are “Vegetable Life,” with its high-pitched chorus and snarling verses above a minimal up-tempo groove, and “Wild as a Dingo,” which is propelled by a fierce riff and disorienting choruses and laden with guitar noise and blitzkrieg drum fills. For both tracks, Wolman created music videos. Each is a montage of short video segments and still photographs of Wolman and Chen in the studio, and they’re both completely out of sync with the music and use images from the same shoot. In fact, after a few views, it’s clear that the footage and stills for the two videos are simply arranged in different orders. It’s a clever détournement of the form. In his playful and subversive way, Wolman illustrates his cynicism toward music videos as a marketing tool, and by doing it through his own music videos, he turns the media apparatus against itself.

Political substance of the videos aside, they’re worth watching to gain a sense Wolman’s oddness and what’s driving him: He lurches about the recording studio, playing various instruments while dancing and singing completely out of sync with the tunes — a lanky man moving like a hummingbird. Wolman said he’s planted in Oakland for now and may record again with Ashley (he’s also got a new drummer, Daniel Yasmin), but if anything is certain, it’s that sudden flight is the way of the Manicorn.