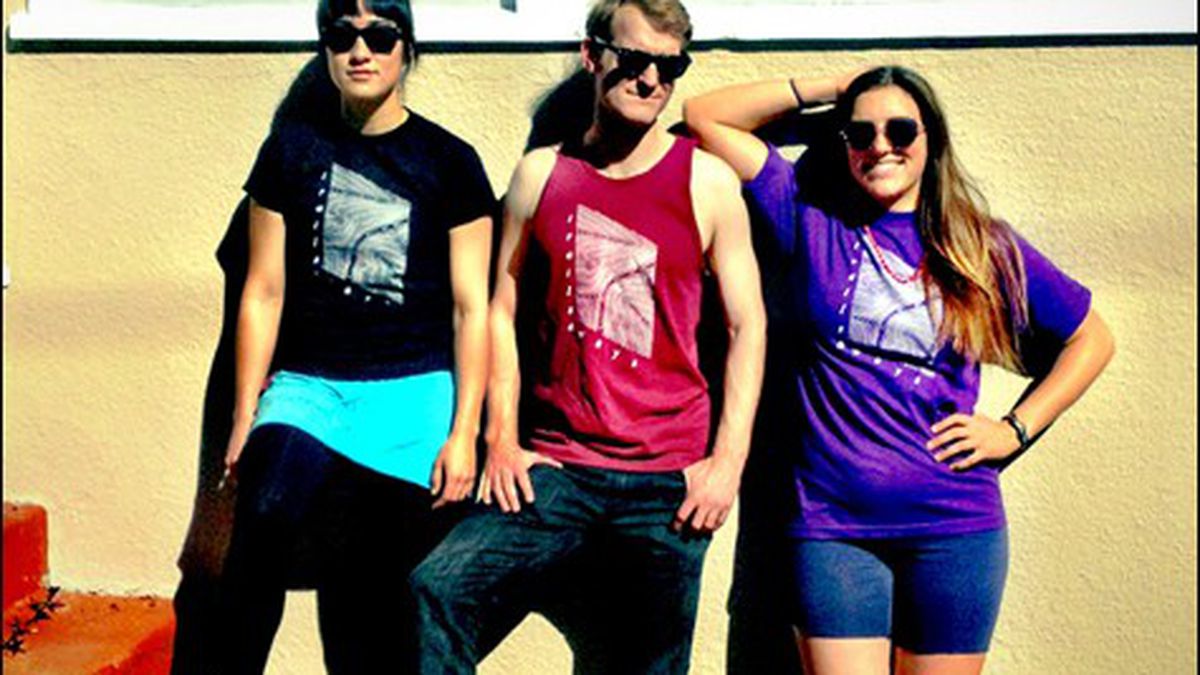 Behind the Scenes of SXSW with Trails and Ways

Each member of the pop quartet talks about what it's like to perform at the week-long festival for the first time.

Editor’s note: Oakland’s Trails and Ways formed when Keith Brower Brown and Ian Quirk met in a vegetarian co-op at Cal, but the band’s breezy, tropical pop sound really came together in 2011, when Emma Oppen and Hannah Van Loon joined. The quartet sings together, sees bands together, and just spent 54 hours in a van together to play 5 shows at South by Southwest (SXSW) in Austin, Texas. Here are their experiences:

Texas is not the dry desert I expected. After arriving Tuesday night, I learned from our friend (and generous host for the week) that Austin is actually built on Edwards Aquifer, which supplies water to the region, in addition to feeding the Colorado River on its way southeast. Swimming holes are abundant, though seasonal, and graceful oaks populate the gently rolling low hills. Still, the expectation of desert, and the experience of driving east from California made me think of intense seasonal rain and its transformative effect.

And so, when we finally arrive at this crazy music festival, I’m picturing spring rain: A flash flood of people and sounds roaring through the streets of Austin, a turbulent mix of competing amplification, intoxication, and commercialization. I’m not sure what I thought it would be, but I’m overwhelmed. It strikes me that I may have to learn to swim in a new way.

A week later, I feel like I know that SXSW has as many parts as the Colorado River: eddies, rapids, side streams that fork off to chart new territory. Being at the festival is learning to navigate these areas, knowing when to float with the masses, when to swim upstream, and when to pull yourself up onto the banks to rest for a moment before slipping back in.

The first rule of being backstage at SXSW is pretty simple: Don’t touch anything or you might die. And it’s true, SXSW is a dangerous place — for a few reasons.

One week out of the year, the otherwise non-descript bars, parking lots, and abandoned warehouses of Austin are turned into fully-fledged rock ‘n’ roll venues, complete with multimillion-dollar light shows to rival the last Poison and Def Leppard co-headlining tour.

The cramped and generally improvisational nature of these venues does a lot of things, but fostering a meticulous culture of safety is definitely not one of them. Look around and there are wires and cables with enough electricity to power a large shopping mall coursing through them routinely being funneled down crowded corridors, through industrial kitchens, and above functional bathroom stalls.

Nowhere in the “official guide to SXSW” does it warn traveling artists about the shoddy and potentially deadly electrical circuits they are likely to encounter. Instead, phrases such as “this box will kill you, don’t touch” and “keep your beer away from this if you want to live” are plastered on makeshift circuit-breaker boxes scattered in the back of every venue. As a first-timer, I was tempted several times to flee from performing and call the fire marshal.

But hey, maybe I’m overreacting. For everything I’ve read about SXSW, I can’t remember a single blog post mentioning a gruesome death by electrocution. It felt like a much more common festival injury is the intense heartbreak of finally seeing one of your favorite bands perform and realizing, to put it in a political way, how hard it is to make its sound work live. Despite the fact that this occurs on a daily basis at nearly every SXSW venue, no warning flyers are posted to prepare you for the letdown.

Being an “official artist” at SXSW means being one of 2,000 bands selected from 10,000 that apply. On top of this, there are countless unofficial showcases from bands playing in every imaginable (and unimaginable) space: restaurants, bars, converted garages, parking lots, and unfinished apartment buildings. In the close quarters of downtown Austin, venues will blast music from any available iPod before sets — dubstep pouring into the streets in a desperate attempt to lure passersby.

Because of the vast number of artists present, festival attendees can take a noncommittal approach to seeing shows. At some venues, people can wander in and take a peek at what’s going on; if they don’t like what they hear, well, there’s another band playing nearby. Despite this setup, I was impressed by the sincerity and dedication of music fans: People came out to 11:30 a.m. shows, stuck around for multiple bands at a single venue, and kept the party going until 3 or 4 a.m.(for an entire week).

My own dedication waned when I attempted to sort through the ten-page list of official showcases (for one day!) typed in eight-point font. I was ready to curl up on the side of Sixth Street wearing my earplugs to block out the hip-hop, country, and punk rock that mingled into an incoherent wall of sound. However, with the help of some trusted bandmates, I experienced undeniable magical moments: Losing myself in the soaring vocals and beats of Blue Hawaii, being transfixed by the bawdy antics of Mac DeMarco, and witnessing the raw energy of DIIV two nights in a row, to name a few.

You are a band arriving for the first time at SXSW. You find yourself on Sixth Street in crowds so thick that you begin to disassociate, and feel like you are swimming upstream through salmon covered in dull, blue scales of denim.

You awoke somewhere in a deft pecking order of badges and wristbands. You start to see tiers in the city, like Fritz Lang’s Metropolis — parallel realities of proletarian lines and elysian VIP rooms.

When the music starts, you discover bands cycled through like auto bodies on the factory assembly line. Soundchecks happen in two minutes, if at all. As a result, the folks running the boards become an instant member of your band, playing improvisational noise in the form of heavy delay and feedback. You search for more and when you finally find the dim club with inexplicably zero line where Blue Hawaii is playing, the sound is pure and unrestrained, and you are stunned by the raw beauty here.

You will drink out of cups logoed by four different companies and eat tacos wrapped in ads. Almost everything is complimentary and almost nothing is free. When every concert is competing with others to provide more free bait, everybody acts like there is no alternative to sponsorship.

When you see DIIV play, the band performs with a billboard of twenty logos as its backdrop to a crowd of badged, drunk industry folks who talk in circles about how young the band looks and how much it reminds them of Nirvana. It can’t be ruined: DIIV’s set is ferocious and loud as hell, giving you dark visions of rising tides and strife. And when you suddenly run into some members of DIIV on Red River Street at midnight, walking gear to their next show, and talk for three minutes about all this, you’ll know you were right to drive 27 hours to be here.