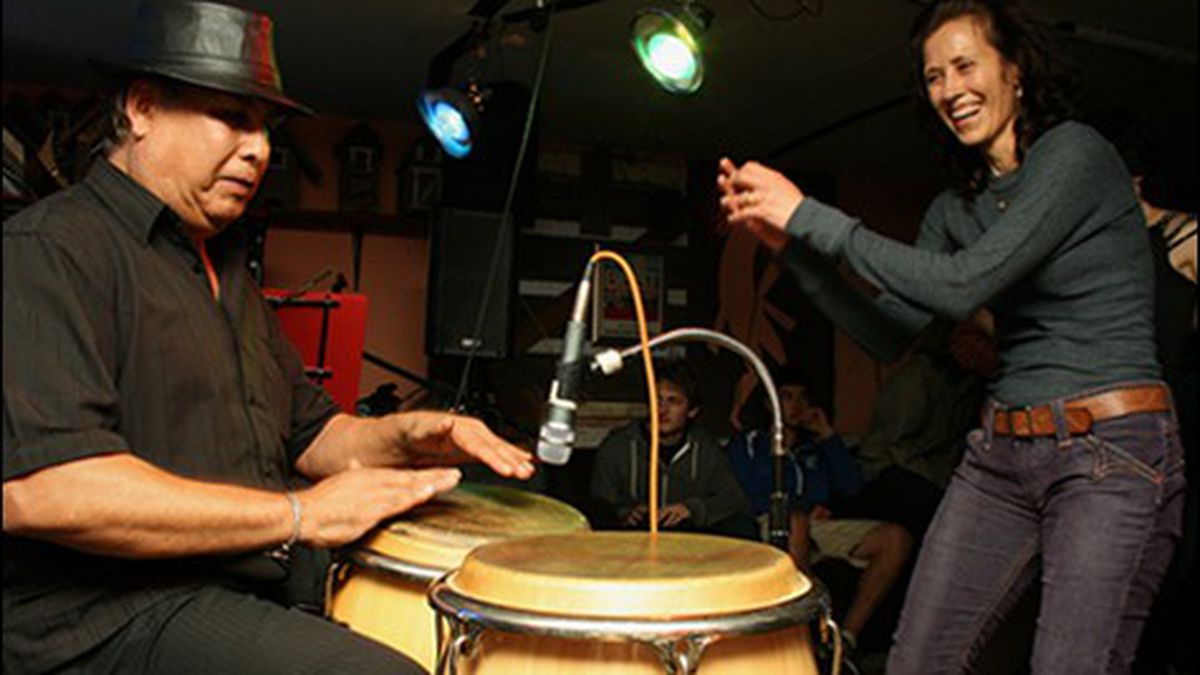 Every Friday night, there’s free barbecue, s’mores, and live jazz at 1733 Sacramento Street in Berkeley. Partygoers bring food and drinks to share, and stuff donations for the musicians into a specially designated birdhouse. For many of the people who frequent the neighborhood party, dubbed the Birdland Jazz Club and Multi Culti Grill, it’s become a weekly ritual. But Birdland doesn’t have a permit, and now host Michael Parayno could face a fine of $8,000 or more for continuing to hold parties without one.

While the city’s zoning department has reached out to Parayno to help him make the festivities legal, Birdland may not fit neatly into the existing permit categories. It’s not a block party. Special-events permits are more typically granted to ponderous commercial events like the Solano Stroll, not late-night parties attracting two hundred people or more.

“We’re not going to give you a permit to open a jazz club in a residential district,” said Gregory Daniel, the city’s code enforcement supervisor. “No matter what the public sympathy is, he’s required to get a permit.” And even if the city decides to issue Parayno a permit for the parties, it may not be willing to grant one every Friday. “I can tell you, the likelihood of getting a special-event permit every year is much more likely than getting one for every week,” Daniel said.

Parayno was cited for zoning violations in early December, and since then, there’s been an outpouring of public support. “I’ve gotten a lot of very positive feedback from people who really like it. The music is wonderful,” said Berkeley City Councilwoman Linda Maio, whose district includes Parayno’s party. “At the same time, we can’t just turn our backs on the zoning ordinance.”

Parayno, a 46-year-old impresario with charm to spare, chafes at these demands. “I don’t think getting together with your neighbors requires a permit,” he said. “Maybe another neighborhood might do it once a year, but for us it’s a norm to do a barbecue every Friday.”

The weekly grill and concert is more homey than a club or bar, and more expansive than a private party. From its origins as a simple Memorial Day cookout, the event has grown steadily, fueled by Parayno’s love of the street parties held in developing countries like Brazil, Cuba, and the Philippines. The suburban barbecue — one grill in the backyard, a polite wave to your next door neighbors as you flip burgers alone — is not Parayno’s style.

“We’re developing a new kind of cultural ethos in the neighborhood,” Parayno said. And it’s precisely some of the event’s zoning issues — the way the party spills out into the street, the futons on the sidewalk, the open-door policy — that gave it its community vibe, Parayno argues. If the party isn’t happening out front, “it just looks like a private club,” he said. “It doesn’t feel as neighborly.”

A lecturer in ethnic studies at several Bay Area colleges, Parayno favors hand-rolled cigarettes, and he wouldn’t look out of place in a velvet smoking jacket. (His RateMyProfessors.com profile has largely enthusiastic comments, as well as a chili pepper icon that marks him as a “hottie.”) But Parayno’s best known in Berkeley as the Bird Man, for his profitable sideline in artisanal birdhouses. Made of recycled materials, the birdhouses have won numerous awards, and can cost from around $40 to several hundred dollars apiece. In 2005, the birdhouse business was doing so well that Parayno was profiled as a local high-roller, with a BMW and a $5,000 Bulgari watch. (He modestly told a reporter that the watch only represented “twenty birdhouses.”)

Parayno operates with a certain flair, and he’s good at enlisting collaborators. The economy may not be so flush any longer, but putting on the barbecues is a priority for him. After he overdrew his credit card twice, he thought about cutting back on the free food, he said. Instead, several friends stepped in to take turns paying for the barbecue. Over the summer, the weekly parties were propelled by the enthusiasm of a group of international students who live in the same building as Parayno, and who saw the parties as a quintessential American experience. Then Parayno’s neighbor, Paul Lynch, a musician and UC Berkeley librarian, offered to bring his jazz trio to the party. The musicians squeezed into the garage, sharing space with an old Volvo. The live music was such a success, Parayno says, that over the next few weeks he got rid of the car, built a small stage, ordered some leather couches, and asked a friend to make a neon sign in homage to New York’s famous Birdland Jazz Club. It features two birds, one playing a saxophone and one playing the bass.

Parayno isn’t overstating the party’s neighborhood vibe. It attracts Germans and Brazilians and Colombians, soccer moms and frustrated entrepreneurs, grad students and professors, next-door neighbors and the residents of a nearby co-op. Many come back week after week to chat up new people and say hello again. It’s an easy place to fall into conversation, and there’s a distinct international vibe. One of the regulars has been nicknamed “senza fondo,” Italian for “bottomless” or “eats without end.” Then there’s Larry, another regular, a 69-year-old with the enormous wispy beard of an Old Testament patriarch. Larry usually eats oatmeal right before the barbecue. “I come for the ambiance,” he said. For him, having a regular Friday night party in the neighborhood has been nothing short of revolutionary. “I’m not usually welcome at places I go,” he explained. “There’s a lot to be said for being welcome.”

At the last party of the year, on December 17, Parayno tried to deal with the code complaints by bringing the party off the street and into his house. The futons were off the sidewalk, but the enormous grill was still smoking in Parayno’s driveway. There were strings of lights in the trees, and next to the grill, a television inside an enormous birdhouse was playing a Manny Pacquiao fight. The night had started with lanky teenagers from the Berkeley High School jazz ensemble lining up for barbecue in preparation for their early set. By 11 p.m., the party was in full swing. Parayno had hung soundproofing on the door of the garage, and inside, in the low, brick-floored room, twenty people were dancing energetically in the middle of the floor, and another twenty were sitting on the sidelines listening to the music.

“This is one of the funkiest venues I’ve ever been to,” said percussionist Rafael Ramirez, who played in the first set with Nerio DeGracia Mambo Jazztet.

Liz Ogbu, a 34-year-old architect from Oakland, was attending the barbecue for the first time. “You would never get this in San Francisco,” she said. At most clubs, she said, “Everyone kind of goes to hang out with their own small group.” But here, “You had high school kids dancing. … The idea that everyone could come and dance their heart out, that was very cool.”

It’s easy to see why Parayno’s parties are so alluring, but their enchantment is magnified thanks to the row upon row of birdhouses that line his back patio. And that, it turns out, is part of Parayno’s problem. He’s not only on the hook for a potential $8,000 fine for the barbecues, but he also owes $24,000 in other fines for using his residential address as a birdhouse manufacturing site and retail store. In fact, Parayno’s zoning violations date back to 2003, Daniel said. He got an initial fine cut in half by promising to move his birdhouse business to Fresno, Daniel said. Then the birdhouses reappeared on Sacramento Street. Parayno argues that his birdhouse business is low-impact and benefits the community. He collected a stack of letters from friends and neighbors testifying in support of his work. As he’s doing now with the Birdland parties, Parayno said that his business, with its local flavor and unique charm, deserved special status.

But this line of defense didn’t fly at Parayno’s administrative hearing in October. The hearing officer reduced Parayno’s total fines from $24,000 to $12,000, but only if he paid the money right away or negotiated a payment plan. But after the Birdland violations, Daniel said, the Code Enforcement Department is not going to negotiate a plan.

“We’re not going to give you a break when you’re constantly breaking the law,” he said. Unless he can pay right away, this puts Parayno on the line for a $24,000 payment. Daniel said it could be worse. Parayno has been warned he could be fined $500 a day for the eight code violations related to his parties. Given his history, Daniel said, Code Enforcement could have doubled that, to $1,000.

For now, the Birdland barbecue nights are on break for the holidays. Parayno has a meeting scheduled with a city official in January to see if they can work out a reasonable permitting plan. He said he could be willing to pay $128 a week for a special-event permit, but he doesn’t want to have to register and re-register the event every week. The barbecue is already running at a modest loss — on December 17, Parayno’s donations totaled $1,108, while the money for the food and musicians ran about $140 over that.

But he remains undeterred. “Berkeley should be honoring me,” Parayno said. “Someday, I’m going to get the key to this city, and I’m going to stick it up somebody’s ass.”

‘Buried in the Body’ Review: Not Your Typical Theater in the...