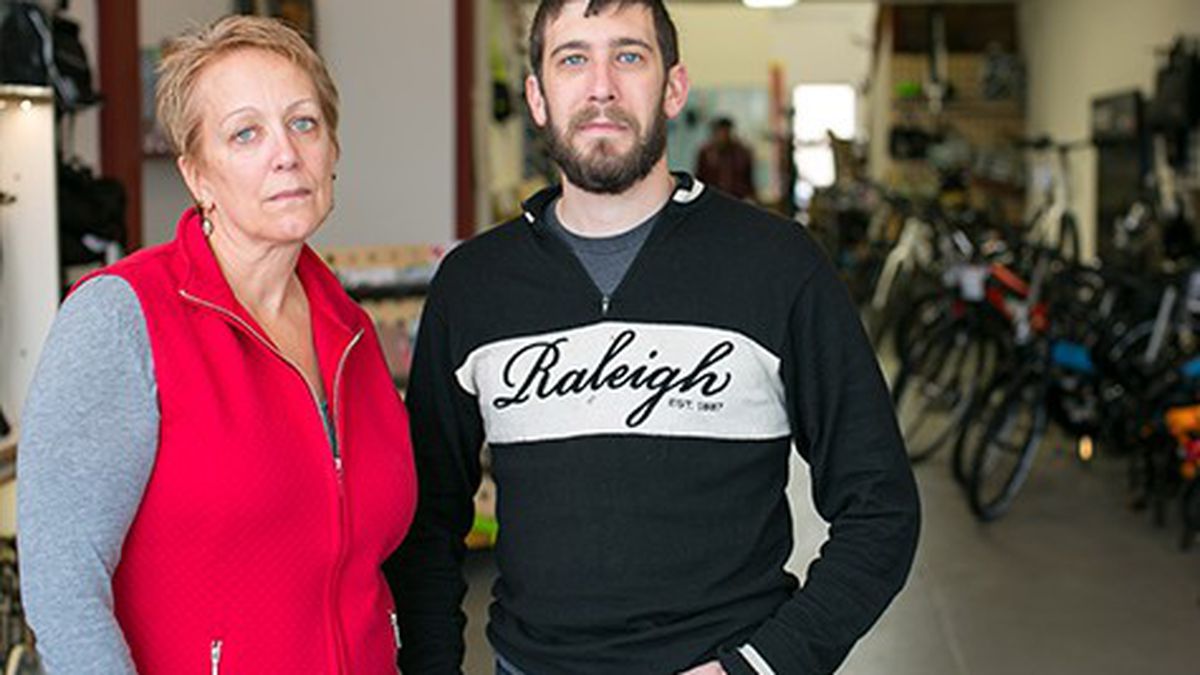 Bay Area Bikes co-owner Clay Wagers has logged 8,000 miles on his Brompton folding bike. He is such a fan of Brompton that he has a tattoo of the logo, and he even asked the inventor, Andrew Ritchie, to autograph his bike for him when he visited the Brompton factory last year. Wagers was understandably devastated when, in the middle of the night on Sunday, October 26, thieves broke into Bay Area Bikes (2509 Broadway, Oakland) and stole 46 bicycles — half the store’s inventory — along with his beloved Brompton.

Shortly after the break-in, a customer came into the shop to pump up his tires, saw the many Bromptons on display at the Uptown shop, and told Wagers he had just seen one up at the Ashby Flea Market. “It even had an autograph on it,” recalled co-owner Glenda Barnhart in an interview. Wagers knew it was his bike that the customer had seen, and eventually got his Brompton back by paying $300 to the flea market seller. Wagers tried to pay the good Samaritan a finders fee for helping him recover his bike, but the customer wouldn’t hear of it. He even refused bus fare.

The store’s other location at 2400 Broadway was also burglarized in the early hours on Saturday, December 6. But OPD was able to quickly respond, and all seven of the bikes were recovered. Including Wagers’ Brompton, 16 of the 53 bikes stolen this fall have since been returned, and Barnhart and Wagers said that without the community-driven help, those recoveries wouldn’t have been possible.

“There’s a community around people — not just the biking community — who are constantly on the lookout,” Barnhart said. “And we’re getting emails all the time, and bike shops talk to each other. We all look out for one another.”

Barnhart also noted that the Oakland Police Department was able to make arrests and recover some of the bikes thanks to actions taken by observant community members. “In four separate circumstances, citizens saw something that wasn’t right and called OPD,” Barnhart said. “Lucky for us, OPD was able to quickly respond.”

OPD Area 2 Lieutenant Chris Bolton agreed that community response is one of the best ways to decrease bike thefts. “[M]y professional opinion is that private organizations, literature, awareness, registries, etc. have proven to be more effective than anything the OPD can offer at this point. I tie that to one word: community,” he wrote in an email. “There is a strong sense of community in the bike world — with a strong sense of culture that is intolerant to thievery and pivots on strong communication and innovation. I am grateful for any and all awareness, recoveries, and anti-theft measures and tools offered and am continually impressed. It’s a sense of purpose and direction I haven’t seen attached to other issues or epidemics of crime.”

As Barnhart and Wagers are well aware, the online resale of stolen bikes on sites such as Craigslist and eBay is a rampant problem, and one community-driven start-up is now taking the sites to task. Project 529 is a Portland-based start-up, registration service, and app that’s harnessing technology and the strength of the cycling community to help with bike recovery. Last week, Project 529 representatives delivered a petition with more than 51,000 signatures that they had gathered, demanding that Craigslist and eBay require serial numbers on their bike sales listings — a small request that, if granted, would make it that much harder for thieves to sell stolen bikes.

“Adding the serial number requirement doesn’t necessarily ‘stop theft,’ but we think it can change the dynamics a bit,” wrote J. Allard, Project 529’s CEO, in an email. “First, we hope it may dissuade thieves from listing in the first place. Second, it can give more information to a buyer to ask questions. … Third, this can help law enforcement engage prior to the sale if the owner has a record. Finally, we hope it helps educate cyclists of the importance of registering their bikes.”

According to Project 529, a bike is stolen in the United States every thirty seconds — bike theft is a $400 million a year business — and less than 10 percent of stolen bikes find their way back to the rightful owners.

The impetus for Project 529 came about after Allard’s own high-end bike was stolen from his secure garage, and turned up a month later on eBay. “I learned that there are no real controls for ‘professional sellers,” Allard wrote. “The guy selling my bike had done nearly a million dollars of business in under five years! The second thing I learned was how powerful social networking is. I sent out the ‘APB’ to my mountain bike teammates and they spread the word. About 10,000 people saw that within hours of me putting the word out. A month later, someone I didn’t know called me and told me it had just listed on eBay.” Allard eventually recovered his bike by bidding on it, winning the auction, and setting up a meet with the buyer and the cops. “Law enforcement is really limited by what they can pursue,” Allard said. “There was nothing they could do prior to the sale even though I knew without a doubt that it was my custom bike.”

Allard noted that, though he’d like to see increased liability for online sellers, owners also need to do a better job of securing their bikes in the first place. “We’ve gotten hundreds of reports and we see ‘cable lock,’ ‘garage door open overnight,’ and ‘left on roofrack while I ran into the store’ too often.”

Citizens can also help decrease bike theft by being wary of online deals and flea market wares that seem too good to be true. “We were surprised that people didn’t know stolen goods were sold at flea markets,” Barnhart said. “If a deal looks too good, it was probably stolen,” Wagers added.

Barnhart noted that another citizen, a 73-year-old man, saw a Craigslist ad offering Bay Area Bikes products that had been stolen and offered to set up a sting to help recover them. “That’s just the bike community,” Barnhart said. “If they see something, they go through their lists, and the tweets and blogs, to see if anyone has posted anything.”

Allard echoed the importance of community in thwarting thieves. “I’m very proud of what the team has done in just one year to build some technology, but the real power comes from the community that uses it. If people take the time to register and join the 529 community to look out for one another, I think that with time, we can help make a dent in it. We certainly can’t do it alone though, and need to work with the industry and form alliances to connect more and more dots to make it less profitable and more risky to sell stolen bikes.”

Despite the heavy losses suffered from the break-in, Barnhart and Wagers remain hopeful, bolstered by the outpouring of support they’ve received. “We love living and making our living in Oakland, and the community is the reason why,” Barnhart said.