Apocalyptic fiction, apocalyptic nonfiction, artists, actors, liars, thieves: This year had something for everyone. 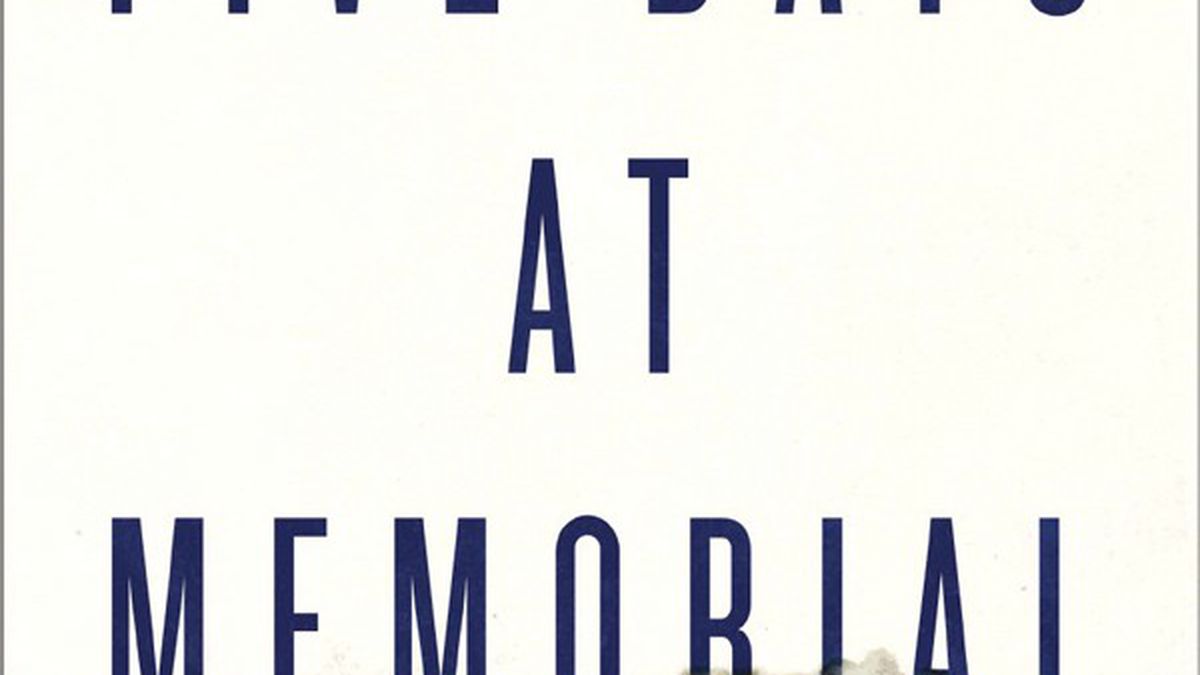 Five Days at Memorial: Life and Death in a Storm-Ravaged Hospital, by Sheri Fink $27

It is, at this point, almost myth, or maybe metaphor: The devastation wrought by Hurricane Katrina, and afterwards, the failure of infrastructure that deepened it. It’s largely that second, manmade tragedy that Sheri Fink is concerned with in her emotionally gripping, exhaustively reported account of negligence, error, and grave lapses in judgment that left 45 people dead at New Orleans’ Memorial Hospital in the aftermath of the storm. The book is the product of a joint New York Times/ProPublica investigation that ultimately netted both a Pulitzer Prize and a National Magazine Award — something akin to the journalism version of an EGOT — but to evaluate it simply on its (mighty) journalistic merits does a disservice to the book, specifically Fink’s masterful way of raising questions about personal and professional responsibility not in spite of, but with the help of, a journalist’s commitment to impartiality. This year’s most important book is also one of its most enthralling. At Night We Walk in Circles, by Daniel Alarcón $27.95

Daniel Alarcón has a way with fiction — not fiction as in the literary genre, per se (though the San Francisco resident is, of course, a brilliant novelist), but fiction the idea, the plot device. Everyone in At Night We Walk in Circles is playing at something, whether openly (as in its actor protagonist, Nelson, who becomes enmeshed with a guerilla theater group in an unnamed South American country) or covertly (practically everyone else in the book); they lie with frequency and skill to themselves, each other, even, it becomes clear, the reader. It’s harder than it sounds — to populate a novel nearly exclusively with actors and liars and self-deluders, a nesting doll of fictions within fictions within fictions — but holy hell is the payoff worth it. The Flamethrowers, by Rachel Kushner $26.99

Some novels are happily small, content with plumbing the exquisite, intimate everydayness of life in measured prose and muted tones. The Flamethrowers, it should be noted, is not that kind of book. Rachel Kushner’s second novel reads as though it’s been rendered in high-def, all hyper-saturated colors and ever-so-slightly heightened reality. It plays out on the blindingly white salt flats of Utah and in the thrumming electricity of the mid-Seventies New York art scene and amid the terrorism-stricken chaos of Communist Italy; its characters have sumptuous, consonant names like Flip Farmer and Didi Bombonato and its similes are visceral — in Kushner’s confident, capable hands, motorcycle engine oil leaks out like “butcher shop residue,” and a tangle of electrical wires looks “like a severed optic nerve.” Reno, the novel’s narrator and main character, is obsessed with adventure — she races motorbikes, gets mixed up with the wrong people, lives impulsively — and so, it’s safe to say, is The Flamethrowers, happily big and hopelessly beautiful. The Unwinding: An Inner History of the New America, by George Packer $27

Among the various aspects of this book’s titular “unwinding” are: the weakening social contract, widening income inequality and the disappearance of the middle class, the rise of what Packer calls “organized money,” the emerging influence of the tech economy, and many, many other examples of the economic, social, and political shifts this nation has seen since the Eighties. That’s an unwieldy and ambitious setup, to be sure — essentially, Packer has set out to chronicle the story of 350 million people and three decades in 449 pages, a sort of book-length state-of-the-union address — but if anyone’s going to do it, and do it well, it’s Packer, a New Yorker staff writer who’s established himself as one of the greatest practitioners of what one might call Telling Stories to Prove a Point. In this case, he does so, deftly, by using real people as proxy for all those weighty ideas, rather than resorting to polemic. Ambition, in this case, is a very good thing. Schroder, by Amity Gaige $15

It doesn’t look particularly good on paper, this one: A rapid-paced, ripped-from-the-(lurid)-headlines story involving identity theft, kidnapping, and familial destruction, told from the perspective of the narcissistic, often unsympathetic, title character, who absconds with his six-year-old daughter during a custody visit. But lo: Schroder is more than particularly good — it’s great, sometimes breathtakingly so; if anything, its main fault is that it incites in the reader the distinctly counterproductive impulses to a) linger over every finely wrought phrase and deeply affecting observation and b) tear through at super-human speed in order to reach the (inevitable and ingeniously plotted) denouement as quickly as possible. It is, suffice it to say, much more Vladimir Nabokov than Dick Wolf, and it is wonderful. The Lowland, by Jhumpa Lahiri $27.95

“Great American Novelist,” screamed the headline on Paul Constant’s Lowland review in the Seattle alt-weekly The Stranger, and you’d have been forgiven for taking this as blasphemy or sarcasm or both, at least initially: London-born Lahiri is, after all, far more brown and far more female than the stone-faced, capital-A authors to which the “Great” appellation is usually affixed. But The Lowland, her second novel, is sweeping and ambitious and elegant in a way that evokes no less than Hemingway, Steinbeck, and, yes Franzen; over the course of its 340 pages, the book traces the trajectory of one Indian (and then, later, Indian-American) family over three generations, through birth and death and sacrifice, all via tiny, telling observations — the strangeness of wool against bare skin after a life spent in Calcutta, the compact tragedy of a mother referring to her son by his dead brother’s name and no one correcting her. Constant, by the way, was dead serious. Tenth of December, by George Saunders $26

In an interview with his editor, Andy Ward, that was published by Slate earlier this year, George Saunders — arguably the greatest living writer of short fiction — revealed that “at least three of the stories in [Tenth of December] were ‘novels’ until they came to their senses.” Indeed, that’s a helpful way to conceive of Saunders’ work, which is to say that his stories don’t feel small at all, not like savagely truncated novels or mere scenes that have been rounded up to “stories” — but rather entire, expansive narratives that have proper beginnings, middles, and ends, wry little raisins of observation and idea and compassion and satire that just happen to be contained in six or sixteen or sixty pages. “That seems to be the definition of ‘novel’ for me,” Saunders said: “a story that hasn’t yet discovered a way to be brief.” Fortunately for all of that Saunders has not only discovered, but mastered, brevity. 100 Apocalypses and Other Apocalypses, by Lucy Corin $22

Apocalypses get a bad rap these days. Blame it on the Rapture or Seth Rogen, but the apocalypse — or at least the fire-and-brimstone fictional manifestation of it — has become almost boring, rote, cliché. The bacon of literary motifs. Not in this collection, from Davis-based Lucy Corin — the bulk of which is, yes, made up of one hundred different versions of the end times, each exquisitely told; savage, searing vignettes that range from one sentence to a few pages. Though the book does contain its fair share of fire and brimstone, it — and Corin — are much stranger and better than that, or even quick description. 100 Apocalypses simmers with kinetic energy and sheer, unmatched imagination, to show all the many ways in which a world can fall apart. The Goldfinch, by Donna Tartt $30

It was perhaps the biggest book of the year: Literally, at a hefty 774 pages; metaphorically, as the Very Hotly Anticipated New Book by a Beloved Author who only Releases One Every Ten Years or So; and, certainly existentially. The Goldfinch is undeniably large-hearted and hugely ambitious, starting with nothing less than a brutal terrorist attack that kills its thirteen-year-old protagonist’s mother and then wending its way — gorgeously, gracefully, compassionately — through decades and countries and revelations and tragedies. Bigger, as they say, is better. The Infatuations, by Javier Marías (translated by Margaret Jull Costa) $26.95

“Once you’ve finished a novel, what happened in it is of little importance and soon forgotten,” María, the narrator of The Infatuations, thinks to herself at one point. “What matters are the possibilities and ideas that the novel’s imaginary plot communicates to us and infuses us with, a plot that we recall far more vividly than real events and to which we pay far more attention.” It’s a winningly, winkingly self-aware — and, yes, metafictive — moment in a novel full of them, but it also serves as fairly apt encapsulation of exactly what makes Marías’ work so compelling: This is a novel not of events but ideas. And though it’s not quite fair to say the plot — a murder mystery, essentially — is of little importance, it’s certainly secondary to what these machinations mean, about perception and memory and envy and violence and morality and, most of all, fiction itself. It’s a triumph.

Double Down: Game Change 2012, by Mark Halperin and John Heileman