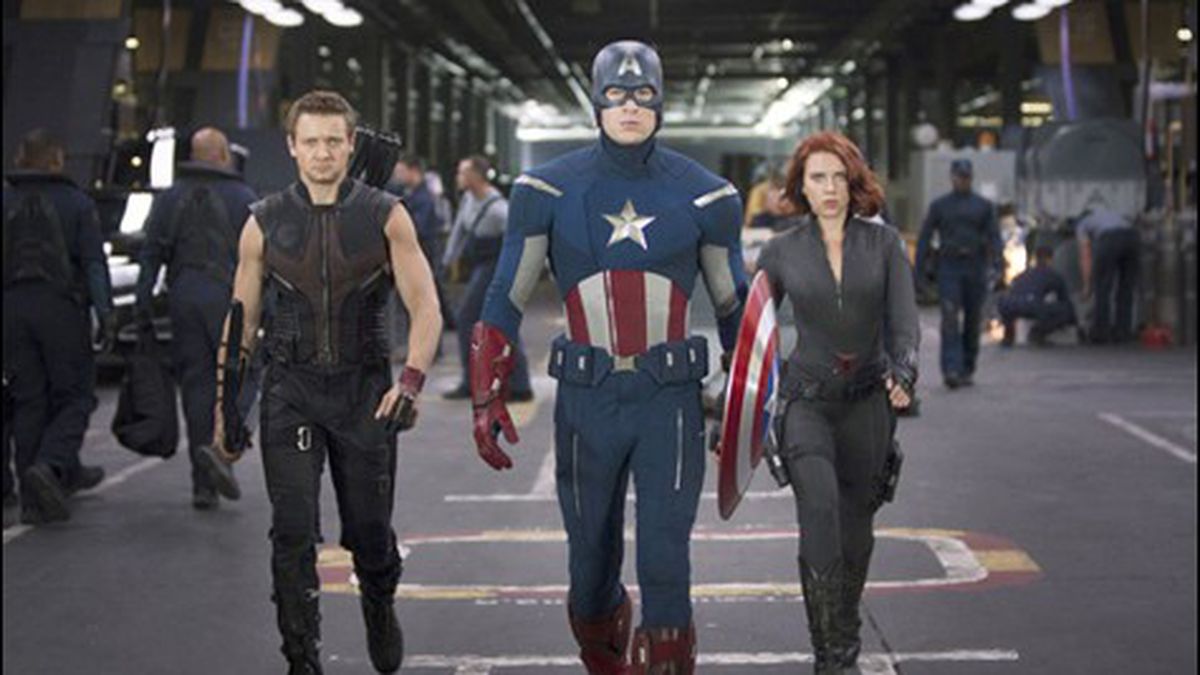 A multitude of thoughts can occur to someone sitting through the 142 minutes of Marvel Comics’ busy, entertaining The Avengers. Here are a few:

Hawkeye, played by Jeremy Renner, is a stereotypical military NCO, a stolid and humorless soldier whose efficiency makes up for his lack of people skills. Bossman Nick Fury (Samuel L. Jackson) has the top executive’s knack for delegating authority, but mostly he’s relegated to prowling the sidelines, picturesquely. Gadget-happy Tony Stark, aka Iron Man (Robert Downey Jr.), however, is the very model of the new sensitive tycoon, a glib and effervescent wisecracker who almost never blows his cool — except when he’s canoodling with his significant other, Pepper Potts (Gwyneth Paltrow).

Loki (Tom Hiddleston), the arrogant, greasy-haired guy in the glam-goth-rock outfit, has the perpetual sneer of the inch-deep villain and nurses the usual bag of resentments. He’s always brandishing a sort of high-tech crab claw that can overcome all other magic wands and devices, except when it can’t. Misunderstood teenagers take note: Don’t become a Loki. Scarlett Johansson plays Natasha Romanoff, aka Black Widow, in full fetish-fashion mode. She would be a challenging first date. Bruce Banner (Mark Ruffalo), on the other hand, just wants to bury himself in his work and forget the overpowering anger that turns him into the Hulk. When he’s not destroying worlds he’s earthy and approachable.

Captain America (Chris Evans), the odd man out left over from the 1940s, is pretty much relegated to a pep-talk role. In the same key but more interesting to look at is Dr. Selvig (Stellan Skarsgård), the archetypal vague, plaid-shirted scientist who doesn’t pay much attention to the people he’s working for, just as long as he has doodads to play with — he’s the man who builds death rays for insane despots. Then there’s mega-muscled Nordic stud Thor (Chris Hemsworth), an NFL linebacker type who made the weakest movie in this never-ending series, last year’s Thor. He, Captain America, Hawkeye, and, sad to say, Loki are kinda dull compared to the Hulk and Iron Man and Natasha. Not all superheroes are created equal. For instance, did you ever notice that no matter what happens, Natasha’s and Thor’s hair is always perfect?

But never mind all that, The Avengers is exactly the sum of its parts, a generous and stimulating way to waste an afternoon. Nick Fury and S.H.I.E.L.D. are worried about a glowing blue cube called the Tesseract. It’s the key to sustainable energy, so naturally Loki wants to get it and blow up Earth. And the business-suited execs who run S.H.I.E.L.D. (bankers? industrialists? telecom magnates?) want Tesseract for themselves, probably so they can charge outrageous monthly fees. With all due respect to Marvel’s Stan Lee, director Joss Whedon, and the writers, they could have done more with Loki. That Norse god was a shape shifter, a sly and mocking role player, the ultimate trickster, not the grumpy character we see here. Legalize Loki!