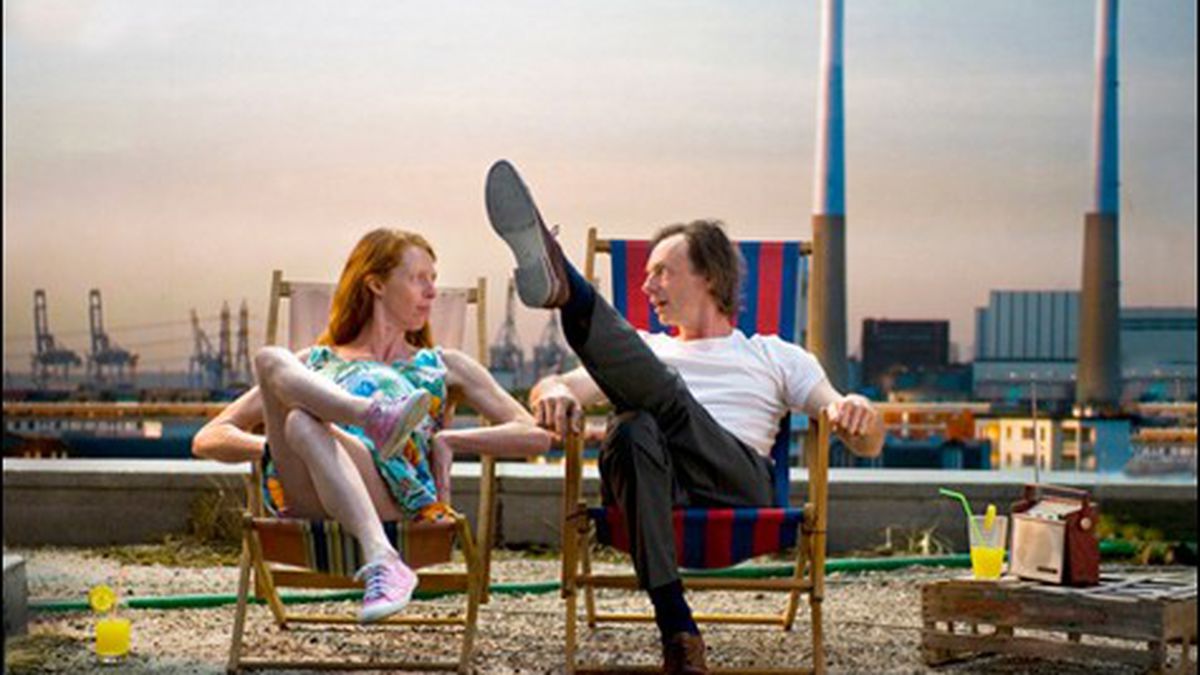 Once upon a time in Le Havre.

They might be the sexiest ugly couple in the movies. Dominique Abel and Fiona Gordon, the Brussels-based writers-directors-performers — with partner Bruno Romy — of Rumba and The Iceberg, put their ungainly physiognomies to sensational use in their latest sight-gag-heavy romantic fantasy, The Fairy, the tale of a sad sack who stumbles upon the love of his life.

We first see Dom (Abel) frantically pedaling his broken bicycle along the docks of the French port of Le Havre in the rain, with plastic bags on his feet and head, on his way to his job as the night clerk in a forlorn little hotel. The poor guy can’t even eat a sandwich in peace. That night two odd guests check in: a bumbling Englishman named John (Philippe Martz) with his dog Mimi, and the woman Dom is destined for, Fiona the fairy. So this is a fairy? Fiona may look more like a homeless meth addict, but she turns out to have a warm heart and magical powers. Soon after she arrives, she rescues Dom with a timely Heimlich maneuver, then grants him three wishes. Voila! Dom and Fiona are obviously made for each other, a star-crossed pair of emaciated, gentle lovers, our guides to the secret soul of Le Havre.

Pixilated by the spirits of Jacques Tati, Charlie Chaplin, Buster Keaton, and, who knows, maybe the guys who made A Town Called Panic, the clownish night clerk and his fairy princess swoop and pratfall through an otherwise disconnected series of physical vignettes that leave us in stitches. Fiona shoplifts a dress from a display window. While fleeing security she meets another shoplifter, Fred Junior (Vladimir Zongo), one of a trio of undocumented African immigrants. Fiona and Dom visit L’Amour Flou cafe, where the ridiculously near-sighted barman (played by filmmaker Romy) bumps into walls. A man learns to fly. A pair of cops fail to notice just about everything. Fiona wakes up in a zany hospital and miraculously, two days after cavorting with Dom in a giant clamshell on the bottom of the harbor, becomes very pregnant.

The highlight of these set pieces is the lovers’ underwater dance sequence, evidently a continuation of Rumba‘s choreography. Even though The Fairy could function as a silent, the music adds a Euro-style cabaret poignancy to the love story. The Belgian creative trio goes batty for old pop tunes and silly dance routines — jazz singer Maxine Sullivan’s version of “It’s Wonderful” is the movie’s theme song, and there’s also a fine vocal performance of Kurt Weill’s “Youkali Tango” by Anaïs Lemarchand, as a member of Le Havre’s female rugby team, Les Dieselles.

All this sweetly absurd eccentricity brings to mind a love-happy, tongue-in-cheek French variation on Napoleon Dynamite, with Fiona and Dom’s baby Jimmy (young Lenny Martz) as the olive in the martini. The climactic chase, with the blind cafe owner driving a car with a trunk full of clandestins and baby Jimmy relaxing precariously on the back, is the early front-runner for giddiest slapstick sequence of the year. Abel and Gordon’s graceful clumsiness matches up well with Claire Childeric’s cinematography and Nicolas Girault’s extra-colorful production design. Their playground is the emptied-out streets of Le Havre, where people can hang off buildings and wake up naked on the beach with no danger. No wonder infant Jimmy has a smile on his face.