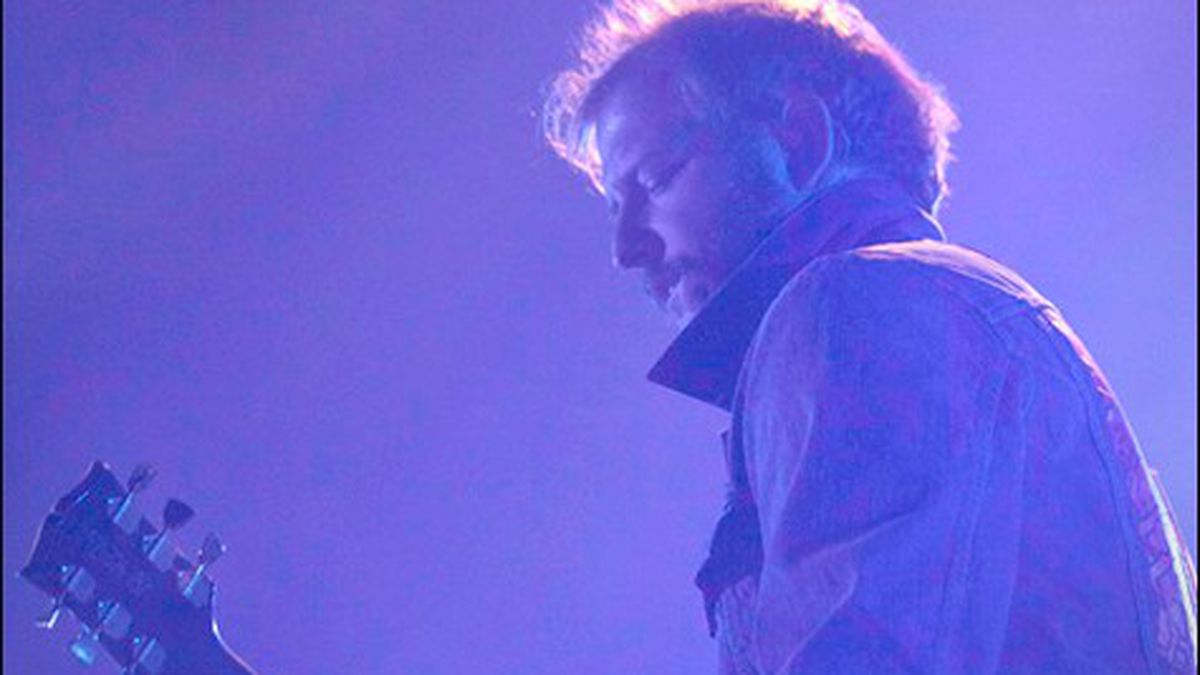 Last week at the Greek Theatre, Bon Iver brought out the big guns for perhaps one of the band’s biggest shows to date. The band pulled off quite a spectacle, with expert delivery and an almost symphonic lineup, singer-songwriter Justin Vernon at the helm. But the core remained obvious: Vernon’s deepest, most vulnerable moments still proved to be the most moving.

Vernon took the stage on Thursday with a nine-piece band that included at least two others with notable side careers. Saxophonist Colin Stetson has a mesmerizingly droney avant-garde solo project, which he works on when he’s not playing with another one of the biggest rock bands in the world, Arcade Fire. Drummer Sean Carey, too, has his own little space in the limelight, with a respectable indie label at his back and a singer-songwriter shtick not unlike Vernon’s.

The band arrived at the Greek with a huge arsenal: several guitars, a trombone, a trumpet, a violin, synthesizers, and a massive baritone saxophone, not to mention the extra percussion, mostly provided by two drummers, each with a full kit featuring whomping double bass kick pedals. It was a fairly extravagant production for a band of humble beginnings.

It’s frankly mind-boggling that before 2008, Bon Iver was no more than a guy in a snowy Wisconsin cabin experimenting with his falsetto. With his first album, For Emma, Forever Ago, Vernon touched the hearts of millions around the world, mostly angsty post-adolescents. Musically, he stuck out his neck, presenting his voice at its most vulnerable range and laying out his cards on a painful breakup. The songs on his debut were mostly acoustic, raw, and unforgiving, like a good living room recording should be.

Since then, his lift-ticket of a debut carried Vernon to the heights of indie rock-star fame, where he has even pushed the boundaries between “indie” and “mainstream.” For instance, he stood on stage at the Coachella Valley Music and Arts Festival last spring alongside rapper Kanye West. He had his own pulpit, like hip-hop royalty, and sang hooks to rap songs despite his scraggly, bearded, T-shirted, and admittedly awkward aesthetic. And people loved it.

Nothing he’s done since For Emma, Forever Ago has sounded quite like it, but that doesn’t mean that Vernon has failed his audience. The crowd Thursday night indicated that pretty clearly. After a riotous response to the first three opening songs (all new), Vernon began to chat with the crowd, mocking the size of the event with a bit of awe, but mostly coy humor. After another bout of applause, he ventured, not without a bit of caution in his voice, “We can tell that you guys like us.”

The super-band continued to deliver mostly songs from Vernon’s recently released second album, with about four older tunes sprinkled here and there. With such a rich palate of instruments, it was hard not to feel a little blissed out. Each song from the new self-titled album plays out over a dreamy, pillow-soft substrate; some tunes are deliberately Eighties in execution. Electric pianos and synths overpowered the PA system.

The soft jams were universally well received. Even though most of the crowd probably only knew someone like Phil Collins through a Disney soundtrack, his stylistic influence was evident. Vernon took a sound that should have been overly sentimental and dated, and pulled it into the present. I even saw some teary eyes by the time the sax solo hit in album closer, “Beth/Rest.”

Despite those weird, nostalgic moments, the concert was a charmed, feel-good affair. The loveliness of the new material was reverie-inducing. The band was well-rehearsed, masterful even, at creating space for the audience to slip into a haze of organic and electronic elements, and then at shaking them back to life with distorted guitars and a powerful, militaristic beat. With double bass pedals kicking away with metronomic consistency, and several other band members on stage diving into fuzzed-out tangents, it almost seemed like they were embracing the collaborative, monolithic sound of other great rock collectives, like Broken Social Scene, or even Elephant 6.

I have to posit, though: Bon Iver’s fanbase must be split between those with deep reverence for his acoustic entry into the scene and those who simply like to vibe along with the pillow-soft slow jams of his second release. For me, the contrast was stark: Songs from For Emma, Forever Ago were acoustic-guitar driven and undeniably more straightforward. The quietest moments occurred when Vernon played alone, for renditions of the soul-chafing “Skinny Love,” or the pitter-patter first-album closer “Re: Stacks.” In these touching moments, Vernon managed his own timing, letting the song rise and fall against the crowd, leaving more time for sensation. The full-band pieces, though grandiose and sonically expansive, felt locked into their rehearsed patterns. They meandered on, and encouraged the crowd to zone out more than connect.

The development in style, which I’ve noticed happening across three of Vernon’s performances in the past three years, seems entirely purposeful. He’s not content to let Bon Iver’s sound become something that’s easily pigeonholed (“guy in the woods with his guitar”), and in today’s musical climate, that’s a smart move. No one seems to fault him for it, either. Those diehard fans who have been with him since the early days were there en masse last week, and they didn’t seem to mind. &#8;